Cory Thorson waiting to get his chance with Huskies 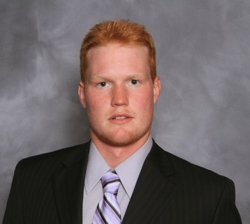 The path Cory Thorson has taken to the wall separating to the two rinks inside the New Hope Ice Arena has been a long one.

But two months into his first season as a freshman at St. Cloud State, he’s arrived on that wall alongside every other former Armstrong and Cooper player to ever don a Division I hockey sweater.

In getting there, Thorson had to first spent a two-year stint playing for Owatonna of the North American Hockey League. He would play 116 total games for the Express – in two years, he never missed even one – racking up 102 points and 52 goals in the process.

As expected, the transition to the WCHA has been a little harder. Through last week, Thorson had dressed in four of the Huskies 14 games, recording just a single assist in the process.

St. Cloud State was off over Thanksgiving weekend, when Thorson caught up with Sun Newspapers Sports Editor Nick Clark for a little chat over what’s transpired in his hockey career since graduating from Armstrong in 2008.

Question: A lot has changed since you last put on that Armstrong sweater. What’s it been like?
Answer: A lot of work. You go from junior hockey playing every game, and now you it is a battle to get in the lineup playing for the Huskies, which is tough. It’s a fun ride. You have to adjust to life differently because you have to work so hard to even get in the lineup.

Q: You made the wall inside the New Hope Ice Arena. It took some time, but I imagine it was always that goal to get up on the wall?
A: It’s cool. As a kid, it’s always a goal to play for the Gophers, and I’ve been a Gopher fan forever, but playing for the Huskies has been a great thing too, and just putting that game jersey on is just a goal I’ve had my whole life. It’s cool people can see it hanging up there.

Q: Your old high school coach Todd Weisjahn was at Mariucci Arena Oct. 22 when you guys took care of the Gophers, building a 5-0 second period lead before winning 5-2. You didn’t dress, but for an old Gophers fan, what was that like to watch?
A: Being a part of a team that routed the Gophers was nice to see. The Gophers are always good, but to be on a team that beats them in Mariucci is a good accomplishment too. Even though I didn’t play, it was good to see our team go in there and beat a team of that caliber.

Q: You had opportunities to leave high school early, but you decided to stay and stick it out at Armstrong and finish your career there. With that, you got to play against some pretty good competition in the Classic Lake Conference for all those year. What did that decision do for your career?
A: It helped me out a ton. Playing against Edina and Minnetonka everyday really helped with my development. It just worked out for the best. And then playing two years of juniors after that even helped out more.

Q: Your junior route was different than a lot of kids perceive it has to be these days. What did the North American League do to get you ready for this opportunity?
A: The North American League is a good league, and playing in all 58 games both years, playing every day in the lineup, got your body prepared and your mind focused. Playing every game, you know what it’s like to play D-I hockey. It just helped out tremendously. Even though I wasn’t in the United States League, it was like the same caliber of hockey.

Q: You said it’s been tough to crack the line-up at SCSU, and I know they have some depth up front, but how do you break into their top-12 forwards and be a constant in the lineup up there?
A: Never take a day off. Work you butt off everyday and hopefully the coach notices during practice.

Q: What has been the hardest adjustment?
A: Definitely the speed. You see some of these guys like Travis Novak – it is stupid how fast he is – and you just have to use your head and adjust to it. I don’t have the most speed in the world, so I just have to work my way around it.