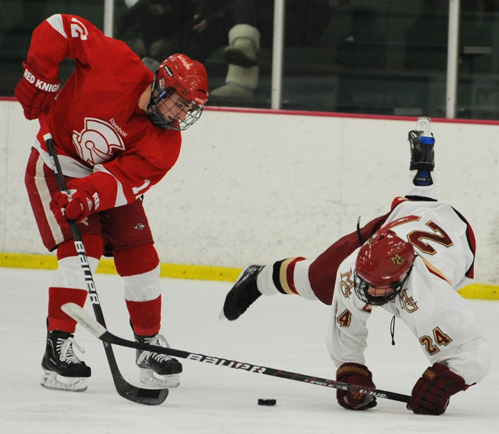 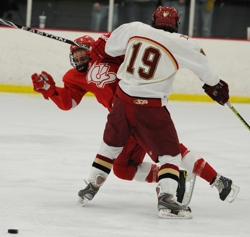 It is one thing to score goals. It is something altogether different to be a goal scorer.

In the closing minutes of tight games against quality opposition, Besse is who you want on the ice.

“When you have guys who can score, you are always dangerous,” Benilde-St. Margaret’s coach Ken Pauly said after Besse scored twice in the third period to rally the No. 4-ranked (Class 2A) Red Knights past the Crimson 4-3 on Tuesday, Dec. 21, at the Maple Grove Community Center.

Looking at it from another perspective, Besse is the one Red Knight you absolutely, positively have to find a way to stop.

“All good players step up at the end,” Maple Grove coach Gary Stefano said, acknowledging Besse is in that category.

For Besse, such late-game heroics are as routine as taping his stick.

In a 3-1 win over Hill-Murray on Dec. 4, Besse scored twice. He notched the game winner in the second period and added another in the third for good measure.

In a 5-3 win over Duluth Marshall on Dec. 14, Besse scored what proved to be the game-winning goal in the third period.

In a 3-2 win over Minnetonka on Dec. 18, Besse scored the winner in – you guessed it – the third period as the Red Knights rallied from a 2-0 deficit.

And, now, the two third-period goals to sink the Crimson.

“I’ve been lucky over the past couple of years to be on a line with such high-caliber guys,” said Besse, a sophomore who was a goal-scoring phenom in the Wayzata youth hockey system.

Besse is more good than lucky, as he proved on his two goals. The first game when  he took a pass from Christian Horn, zipped through the slot then waited for Maple Grove goaltender Ryan Coyne to go down before launching a shot high into the net.

Besse’s second goal came after he collected a rebound of a Pat Steinhauser shot and calmly desposited it into the net.

All of this scoring, and clutch scoring at that, is familiar territory for Besse. As a Bantam, Besse played on a line with Wayazata standout Mario Lucia and Breck star Grant Opperman. With Benilde-St. Margaret’s, Besse has spent the past two seasons paired mostly with Pat Steinhauser and Christian Horn.

Besse has nine goals and three assists this season. He amassed 30 goals and 20 assists last season. In youth hockey, those numbers were in yet another stratosphere.

Sophomore Grant Besse scored twice early in the third period as Benilde-St. Margaret’s, No. 4 in the Hockey Hub’s latest Class 2A rankings, rallied to beat Maple Grove 4-3 on Tuesday, Dec. 21, at the Maple Grove Community Center.

Maple Grove took a 3-2 lead 43 seconds into the final period when senior defenseman Steve Popowitz blasted long-range shot into the net for a power play goal. Benilde-St. Margaret’s had taken a too many men on the ice penalty to end the second period.

Alex Mason and Chase Carey also scored for the Crimson, whose only other loss this season has been to No. 1-ranked Wayzata.

1. Grant Besse, Benilde-St. Margaret’s
Is there a better sophomore in the state? Apple Valley’s Hudson Fasching certainly is in contention for that honor, but on this night Besse was as clutch as any player – of any age -- an the state. His two goals in the third period – both of them coming from the same spot just to the right of the goal -- rallied the Red Knights to victory.

2. Dan Labosky, Benilde-St. Margaret’s
The Red Knights got some good pressure and production from their second line, and the freewheeling Labosky set up the Red Knights’ second goal, scored by Jake O’Borsky, with some nifty stickhandling.

3. Jordan Gross, Maple Grove
The sophomore defenseman didn’t factor in the scoring but he used his standout skating ability to consistently carry the puck out of the Crimson zone and set up some quality scoring chances. 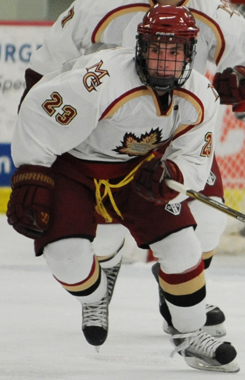