Storm senior Tony Bruns' stunning save total is believed to be a state and national single-game record. 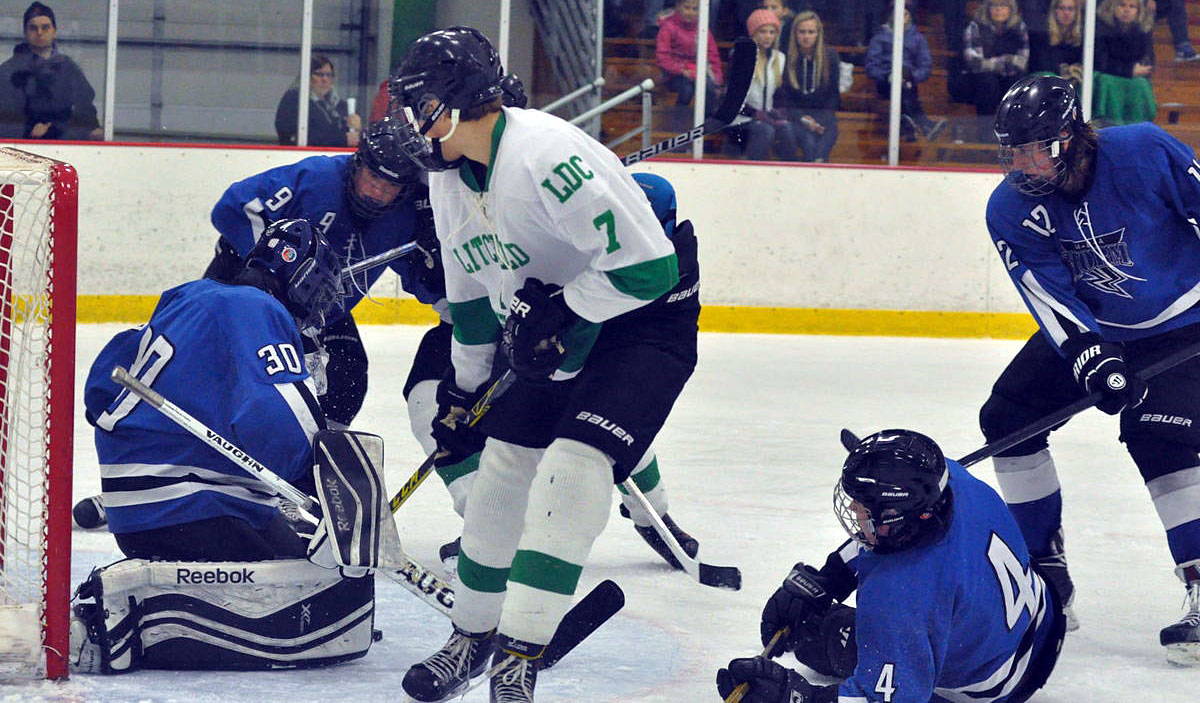 Morris/Benson senior Tony Bruns makes one of his 98 saves in a 12-0 loss to Litchfield/Dassel-Cokato on Saturday, Nov. 26. Photo courtesy of Mike Randleman/Litchfield Independent Review 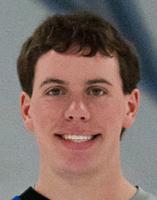 Morris/Benson senior goaltender Tony Bruns is so accustomed to facing insanely high numbers of shots each game that he brushes aside mass amounts of flying pucks as effortlessly as a northwoods outdoorsman swats mosquitoes.

In his four seasons as a starter for the Storm, Bruns routinely has made 40, 50, 60 and even 70-plus stops in a single game. So he didn’t even entertain the notion he was in the midst of what is believed to be a state- and national-record performance on Saturday in a season-opening 12-0 loss to Litchfield/Dassel-Cokato.

On the bus ride home, Bruns, who had mentioned to Morris/Benson coach Jeremiah Day that he had never been so sore after a game, glanced at the scoresheet and saw his save total.

“I was a little surprised,” Bruns said. “My whole career I’ve had a lot of shots, but never that many. I thought it was just like any other game.”

The Minnesota State High School League lists a 76-save performance by River Lakes’ Spencer Theis in a 2008 game against Brainerd and Moose Lake Area's Gage Mohelsky's 76 stops against Princeton in 2012 as the most in a regulation (no overtime) game. An 84-save game by Jamey Ramsey of Flint Northern (Michigan) in 1987 is listed as the national record by the National Federation of State High School Associations. 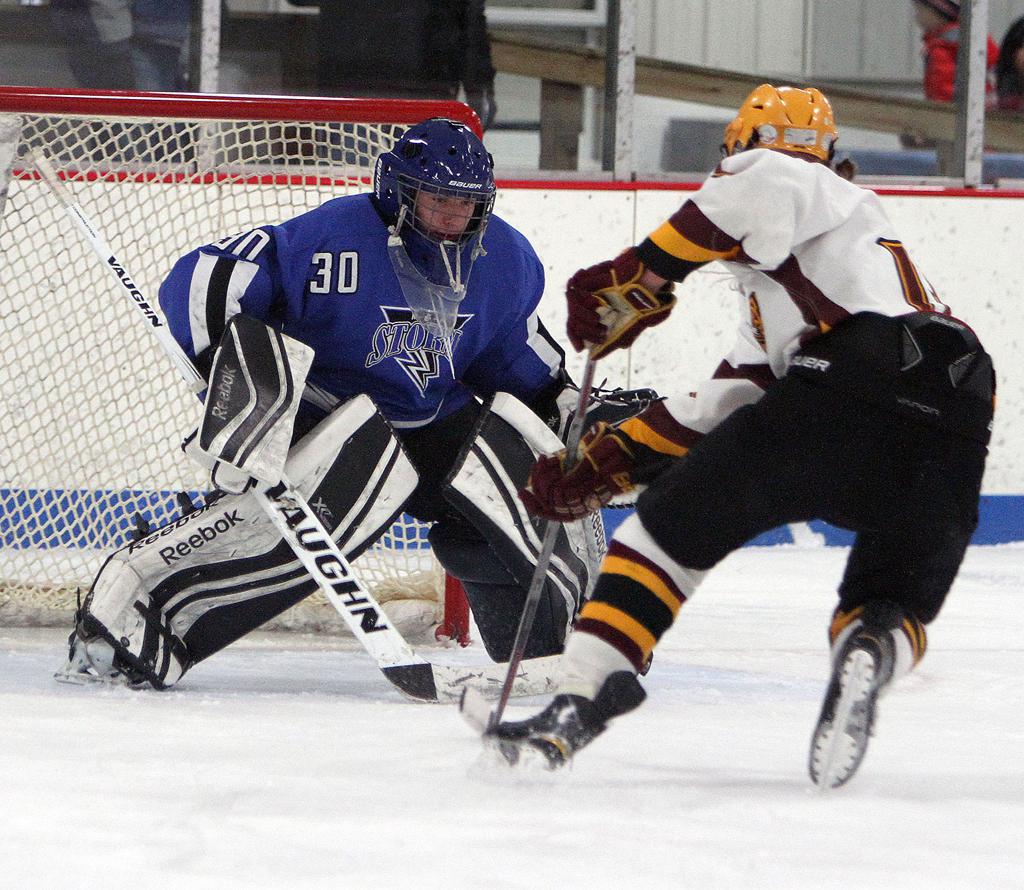 Morris/Benson senior Tony Bruns has been a starter for the Storm since his freshman season. Photo courtesy of Brooke Kern/Morris Sun Tribune

“There is no doubt he was busy,” Day said. “After a while as a coach you lose track of how many saves he has.

“I actually had a question about a penalty at the end of the game, so that was why we were looking at the scoresheet on the way home. And then we saw the save total and thought, ‘Oh my, what is going on, is that some sort of record?’ ”

Bruns’ remarkable career in terms of workload has gone relatively unheralded. He has finished among the Minnesota leaders in shots faced and saves each of the past three seasons, peaking at No. 3 in the state in both shots (1,018) and saves (888) in 2014-15. Last season, also in a game at Litchfield, he made 75 saves on 87 shots in a 12-0 loss against the eventual section champion Dragons. That performance, which before Saturday would have put him at No. 2 on both the state and national single-game saves lists, went mostly unnoticed.

The Storm had just 12 players suit up Saturday against Litchfield/Dassel-Cokato. The Dragons are projected as a favorite to make a return trip to the state Class 1A tournament again this season. Meanwhile, of the Storm’s 11 skaters, three are new to hockey.

“There were several times that, when we would shoot, he would kick out a rebound and then make two or three or four more saves,” Litchfield/Dassel-Cokato coach Chris Olson said. “He was kicking his legs out and snapping saves. I was like, ‘Holy cow.’ ”

Olson was so busy scheming ways for his players to get pucks past the razor-sharp Bruns that he also failed to pay attention to the shot totals until after the game.

“I was walking to the locker room after the second period and the scorekeepers were saying something about 80 shots,” Olson said. “I thought they were maybe thinking that’s what we would get to for the game.”

Controlling the puck in the Storm end for 4- and 5-minute stretches at a time, the Dragons unloaded 45 shots on Bruns in the first period, 41 in the second and slowed to a mere 24 in the third. Olson said his student managers also tracked his team’s shot totals and, remarkably, came within one of the official scorekeepers’ count.

Dalen Jones, a former youth hockey goaltender who referees high school hockey games, was one of the official scorekeepers tallying shots. He counted shots on goal at the Morris/Benson end of the ice in the first and third periods.

“The guy played out of his mind,” Jones said about Bruns. “It was ridiculous. I was getting sore just watching him.”

As for the accuracy of the game’s shot totals, Jones said, “I don’t count it as a shot unless the puck would have gone in the net. There were a lot of rebound saves. It is a legit number.”

Because the Storm are so short on players, they haven’t had the luxury of a backup goaltender for the past several seasons. That means pulling Bruns isn’t an option, no matter the score or his fatigue level.

“I kept calling for a shift change,” Bruns joked on Tuesday, noting that he was still sore from Saturday’s ironman effort. “But they didn’t listen.”

Other than a bruised and battered body, Bruns, who also runs cross country and plays golf, is showing no signs of being shellshocked. When reminded, jokingly, that two more saves would have gotten him to 100, he said with a laugh, “I’ll probably have a few more chances to get there this year.”

Most Single-Game Saves as Recognized by the NFHS

Most Regulation Game Saves as Recognized by the MSHSL