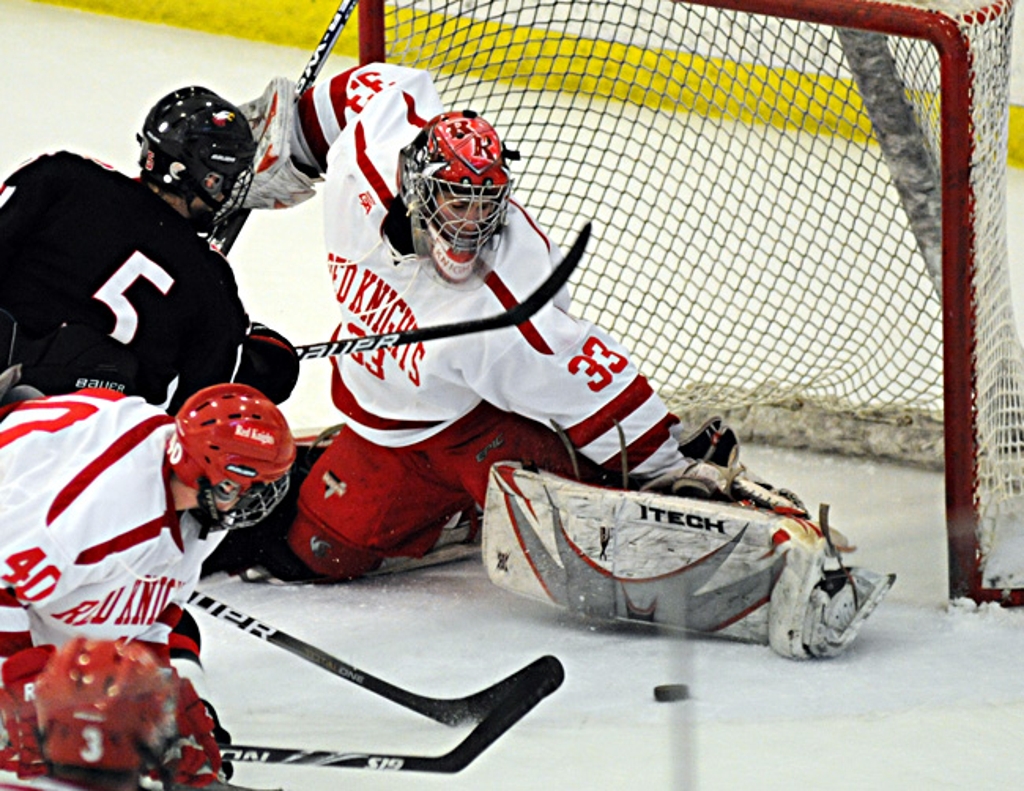 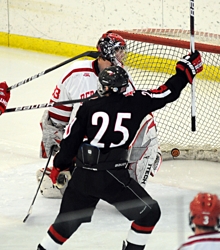 Eden Prairie's David Rath (25) had a home in front of the Benilde net, scoring five goals (Photo by Tim Kolehmainen).

Coming off back-to-back losses before the holidays, Eden Prairie coach Lee Smith talked to his team about leaving the locker room with a purpose. It’s certain that one of his players was paying attention.

Senior forward David Rath tallied five goals as the Eagles raced out to a big lead and then held on for an 8-5 victory over host Benilde-St. Margaret’s in the quarterfinals of the Holiday Hockey Classic in St. Louis Park Tuesday afternoon.

“We challenged our guys by changing our forecheck a little bit -- make them move and make them work harder. A little bit more aggressive and attack-oriented,” said Smith. “It worked out well.”

Rath scored five goals in the first two periods, two at even strength, one on the penalty kill and two on the power play. The big day pushed his team-leading goal total to 14 on the season, eight on special teams play.

“We had to come out with some fire,” said Rath, who teamed with Kyle Rau and twin brother Mark Rath on the Eagles’ potent top line. “I got really lucky and I was just burying the puck today.”

Eden Prairie, once ranked No. 1 in the state, had lost its last two games: 3-2 to Edina in overtime at the Edina Holiday Tourney on Dec. 18 and 4-2 to Eagan four days later. Early Tuesday afternoon, the Eagles made certain that it wouldn’t be a three-game losing skid.

After Jack McCartan ricocheted a wrister off the post and into the net 4:50 into the third period to push the Eagles’ lead to 7-2, it appeared as the lead was safe. But Benilde came roaring back with three straight goals in less than five minutes to make a game of it.

Chris Flood started the outburst at the 8:58 mark of the third, followed just 42 seconds later by Dan Labosky’s second of the night.

When Jake Horton tucked a wrap-around power play goal past Eden Prairie goaltender Andrew Ford at 13:49, the lead was down to two goals. Benilde continued to pressure, but Rau sealed the victory with an empty netter.

“We picked it up, but we just picked it up too late,” said Benilde-St. Margaret’s coach Ken Pauly. “When you spot a team as good as Eden Prairie a lead, there’s no margin for error.”

Ford finished with 30 saves on 35 shots for the Eagles, while Anders Jecha made 24 saves for Benilde. The Red Knights actually outshot Eden Prairie for the game, 35-23, including 16 shots in the third period alone.

Benilde will face Elk River in the consolation semifinals of the tournament Wednesday afternoon. The Elks lost the opener to Maple Grove, 5-2. Eden Prairie takes on the Crimson in the championship semifinals. 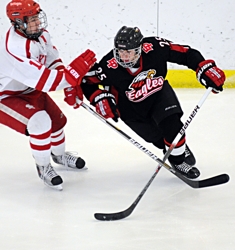 David Rath (25) leads the Eagles in goals with 14 (Photo by Tim Kolehmainen).

David Rath admitted after his five-goal effort against Benilde-St. Margaret’s that he’s not normally a big scorer.

It was tough to believe after watching him score in nearly every way against the Red Knights – two at even strength, two on the power play and one short-handed snipe from the high slot. He scored on great passing plays from his linemates, twin brother Mark and Mr. Hockey favorite Kyle Rau. He scored on scrums in the crease. He scored with tip-ins, with a blistering wrister and with quick hands.

“They’ve been great players for three years,” claimed Eden Prairie coach Lee Smith about the Rath twins. “Last year we just couldn’t get them open. This year, we’ve been able to find them spots.”

Mark Rath has been the playmaker of the twins this winter, scoring two goals and 10 assists. David Rath has been a sniper, leading the Eagles in goals with 14. He had 15 goals as a sophomore when the Eagles won the state title and recorded just nine last winter.

“He gets lost in the shuffle with a lot of good hockey players on our team,” admitted Smith.

While opponents have been focusing on stopping Rau, David Rath has been making them pay thus far. He was challenged by Smith to step up earlier this season – and he’s certainly done so.

“Me and my brother have to step it up,” agreed the soft-spoken Rath.

The brothers have played on teams together since their youth hockey days, usually on the same line. Tuesday was the first full game for the Rath twins to play on a line with Rau, however. They clicked right away, combining for 10 points (six goals, four assists).

“I work really hard and crash the net. It really helps to play with Kyle and Mark,” said Rath. “They’ve been getting the puck to me and I’ve been working really hard on putting it away.”

Maple Grove 5, Elk River 2
Shane Wolden scored twice in the opening 2:16 of the game, leading the Crimson to a victory in the quarterfinals of the Holiday Hockey Classic in St. Louis Park.  By agreement of the two programs, the game also counted in the Northwest Suburban Conference standings.  Ryan Coyne made 25 saves for Maple Grove (6-2-1), while Anders Franke had 28 stops for Elk River (4-5-0).  Maple Grove advanced to the semifinals against Eden Prairie, while Elk River will play in the consolation semifinals against Benilde-St. Margaret's.

Moorhead 4, Bloomington Jefferson 2
Spuds' leading scorer Eric Brenk tallied a pair of goals, including an empty netter in the final minute, to give Moorhead a victory in the quarterfinals of the Holiday Hockey Classic in St. Louis Park.  The Spuds (3-2-1) got 40 saves from goaltender Michael Bitzer, as Jefferson (3-4-0) outshot the Spuds, 42-34.  Austin Hunt and Colin  Hernon scored for the Jaguars.

Wayzata 5, Centennial 3
Tony Cameranesi and Mario Lucia each scored two goals as the top-ranked Trojans remained unbeaten with a tight victory over Centennial in the quarterfinals of the Holiday Hockey Classic in St. Louis Park.  Wayzata (10-0-0) had beaten the Cougars 6-1 earlier this season, but the Cougars proved to be a tougher test in the rematch.  Nick Larsen had two goals for the Cougars (2-6-0).  Wayzata plays Moorhead in the championship semifinals Wednesday, while Centennial faces Bloomington Jefferson in the consolation round. 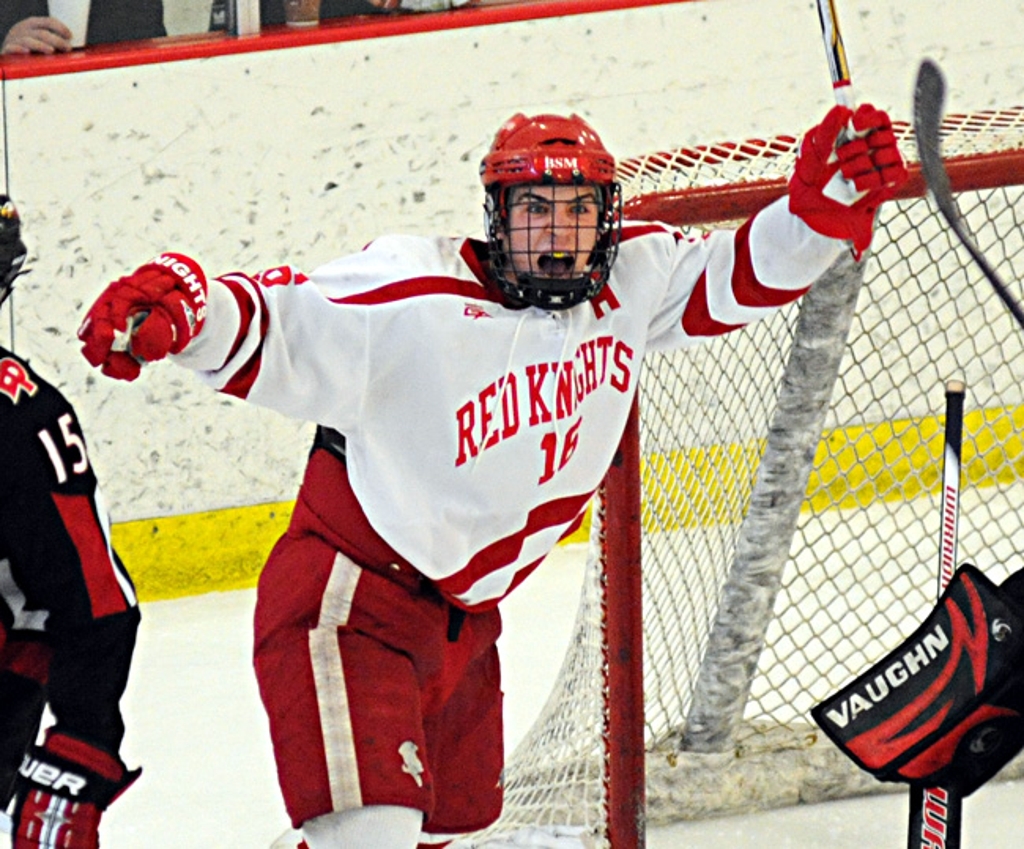 Order photos from today's tournament from the Breakdown!

1. David Rath, Eden Prairie
Five goals was enough to earn a No. 1 star.  Rath, a senior forward, netted five goals in the Eagles' 8-5 victory over Benilde -- and they were all needed.  He scored on the power play, short-handed and at even strength.

2. Luc Gerdes, Eden Prairie
Gerdes, a senior forward, scored a goal and an assist.  His speed was evident on every shift as the Eagles built up a five-goal lead early in the third period.

3. Dan Labosky, Benilde-St. Margaret's
Labosky, a sophomore forward, tallied a pair of goals as the Red Knights attempted to rally from a 7-2 deficit in the third period.