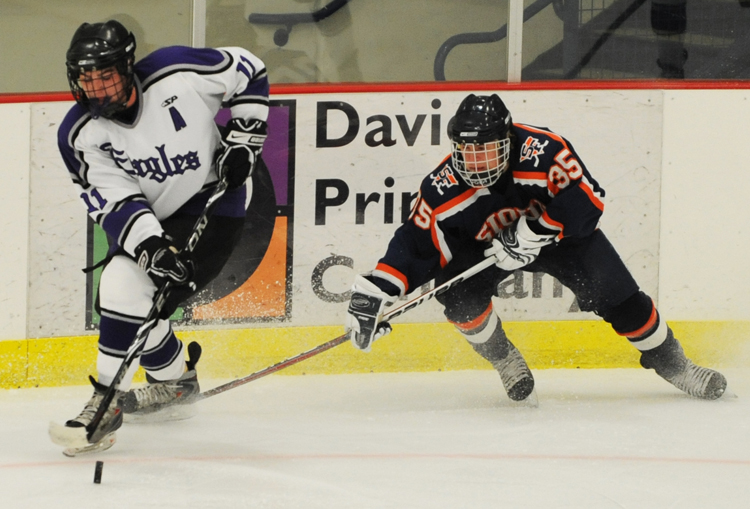 They call it “Ten Puck.”

The twist to the game – losing team does pushups – is that the New Ulm varsity shoots on standout senior goaltender Blake Burgau.

New Ulm (5-1-2) hasn’t done the shootout drill much this season, as the final minutes of practice mostly have been reserved for conditioning or special teams work.

Still, the Eagles were sharp enough to outscore Sioux Falls 2-1 after the teams had played to a 2-2 overtime tie in the quarterfinals of the Rochester Kiwanis Hockey Festival’s Class A division on Tuesday, Dec. 28, at Graham Arena in Rochester.

“I was just talking with the guys in the locker room,” New Ulm senior Kaleb Juntunen said. “I think in all the years we’ve been together, we’ve only lost one shootout and we’ve been in four or five.”

Juntunen scored on New Ulm’s first shootout attempt and Jeff Banal gave the Eagles the win when he scored on their third shot. Burgau, who helped lead New Ulm to a state Class 1A tournament appearance last season, stopped the first and last Sioux Falls attempts.

“I guess in a tournament like this, that’s what gets us over the edge,” Setterholm said about the shootout format to determine who advances in the eight-team bracketed tournament. “We should have taken them out when we had the chance. The story of the game was we should have put them away and we didn’t.”

New Ulm led 2-0 on second-period goals by Shane Traulich and Adam Loose, but Sioux Falls tied it in the third when Brandon Miller scored twice in a span of 17 seconds.

After an 8-minute overtime period came the shootout. Turns out Juntunen and Banal had opposite -- although equally effective -- strategies.

“As I was going down I saw that their goalie, he came out pretty far,” Juntunen said. “He came out about 15 to 20 feet.  So I thought that if I am going fast enough, and put a move on him, he won’t be where he thinks he is, then I will just pull it around him.”

That pretty much described Juntunen’s goal, as he had Flyers goaltender Caleb Poe mesmerized by the puck as he reached the crease, where Juntunen calmly pulled the puck around Poe and popped it into an open net.

Banal skated in and snapped a hard shot that clanged off the left goalpost. It was about as basic, and loud, as breakaway goals get.

“I didn’t want to do anything too fancy,” Banal said. “I just wanted to get the puck where it needed to go.”

With the win, the Eagles are headed to a Wednesday semifinal showdown with Richfield, which advanced with a 6-5 victory over Albert Lea. 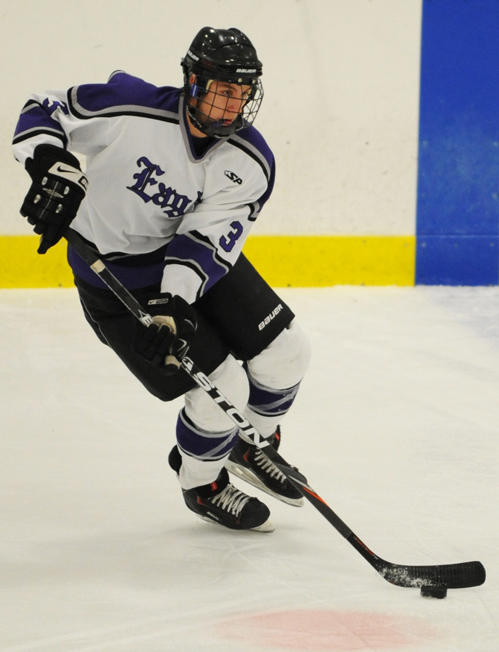 After a scoreless overtime period, Kaleb Juntunen and Jeff Banal scored in ensuing shootout to lift New Ulm past Sioux Falls, S.D., and into the semifinals of the Rochester Kiwanis Hockey Festival on Tuesday, Dec. 28, at Graham Arena in Rochester.

Brandon Miller scored twice in a span of 17 seconds in the third period for Sioux Falls, as the Flyers rallied to force a 2-2 tie at the end of regulation in the quarterfinal matchup.

Both teams had quality scoring chances at the beginning of the 8-minute overtime period, but New Ulm goaltender Blake Burgau and his Sioux Falls counterpart, Caleb Poe, were cool under fire.

Poe was especially busy, ad he finished with 36 saves. Burgau finished with just 15 saves, but he stopped two of the Flyers’ three shootout attempts, including one by Miller.

Shane Traulich and Adam Loose scored in the second period for New Ulm (5-1-2), which plays Richfield in the semifinals. Richfield advanced with a 6-5 victory over Albert Lea.

1. Jeff Banal, New Ulm
The junior forward wasn't listed on the Eagles’ roster, but he was on New Ulm coach Erik Setterholm’s short list of players (three) selected to participate in the shootout. Banal snapped a shot in off the left goalpost to send New Ulm to the semifinal round.

2. Kaleb Juntunen, New Ulm
The senior forward used a dizzying series of dekes to get Sioux Falls goaltender Caleb Poe out of position, and Juntunen then skidded the puck into the open goal as he cooly converted his shootout chance.

3. Caleb Poe, Sioux Falls
The Flyers’ goaltender repeatedly was peppered with shots, but he controlled most of the rebounds and became tougher to beat as the game wore on. He finished with 36 saves. 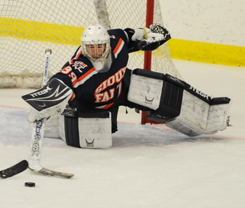