Edina breaks away from East 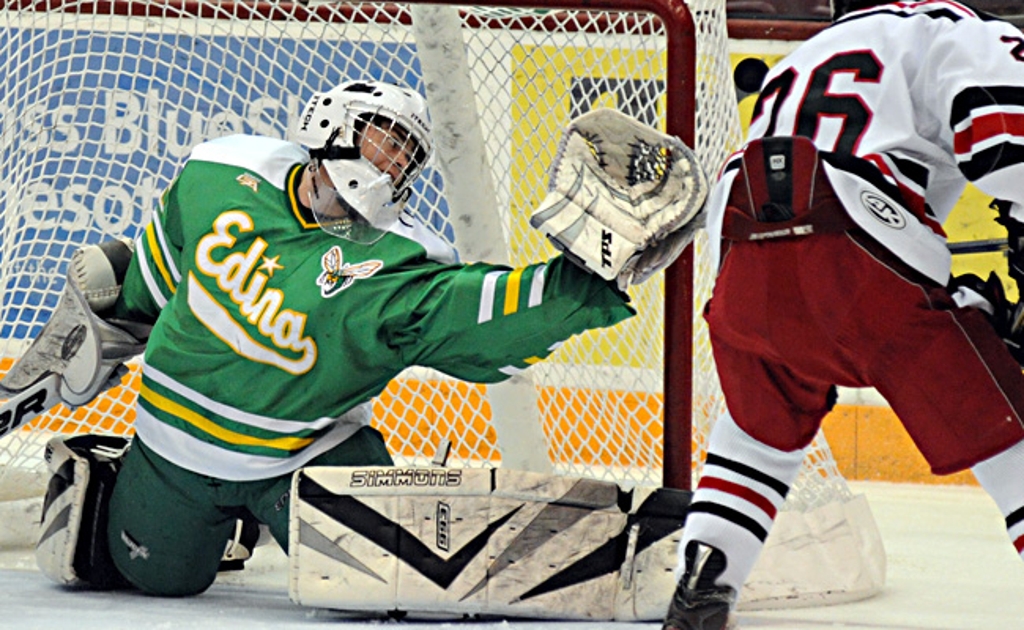 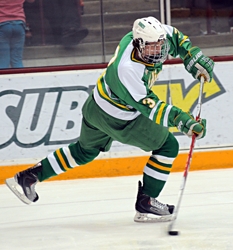 Steven Fogarty and Jon Cote each scored twice as Edina edged Duluth East, 4-3 in the quarterfinals of the Schwan Cup Gold Division at Mariucci Arena Wednesday night.  The Hornets (6-2-0) have now played in six one-goal games this season, winning four.

Cote netted the game-winner with less than five minutes remaining -- and just 1:16 after East (6-2-0) had tied the game after rallying from a two-goal deficit.  On the winning play, Anthony Walsh picked off an errant Greyhounds' pass at the blue line and threw it on net, where both Fogarty and Cote had a whack at it.

The game-winner was the only non-breakaway goal for the Hornets, as East defensive giveaways led to four separate open breaks, three for Fogarty alone.

“We can not do that,” said a clearly frustrated Duluth East coach Mike Randolph. “All four were mental breakdowns. It was hard to take. Let’s face it, Edina is a good opponent. They put a lot of pressure on our D and we panicked with the puck.”

Fogarty opened the scoring at 14:43 of the first period, then assisted on Cote's breakaway tally to push the lead to 2-0 midway through the second. Edina appeared in control of the game, as the Hornets had outshot East 17-9 to that point.

East drew within one just 19 seconds later on a goal by Jake Randolph.  But Fogarty intercepted a defense-to-defense pass with 5:01 left in the second and raced in for a shorthanded goal and a 3-1 lead after two periods.

“Luckily I got few nice bounces and I capitalized on them,” said Fogarty.

The Greyhounds wouldn’t go down quietly, however. They rallied with great puck movement and control in the third period, particularly from the top line of Jake Randolph, Trevor Olson and Dom Toninato.  Olson scored both goals on criss-cross passing plays from Randolph.

East’s defense also stiffened, holding Edina without a shot in the third for more than 10 minutes of game time. The first official shot of the frame came on the flurry that netted Cote the game-winner.

“It’s hard to take because we feel like we just gave it to them,” said the elder Randolph. “And I don’t like giving anything away. To anybody.”

Senior Alex Nelson got the start in nets for the Hornets and made 14 saves on 17 shots, many from point blank range.  He was particularly solid in the first two periods, stopping numerous scoring chances with a quick glove hand.

“They had a lot of pressure, but I think our defense also played very well tonight,” said Nelson, who admitted he felt the pressure of starting against a team like Duluth East.

Edina moves on to the championship semifinals Thursday night against Hill-Murray, an 8-0 victor over Breck in an earlier quarterfinal game.  Meanwhile, Duluth East plays the Mustangs in the consolation semifinals.

“It sounds like the Chicago Bears and Denny Green, but the Hill-Murray Pioneers are who we thought they were. They’re very good,” laughed Giles.

Blaine 3, White Bear Lake 0 The Bengals scored three times in a span of 7:18 of the second period and held on for a victory over White Bear Lake (5-3-0) in the quarterfinals of the Schwan Cup Gold Division at Mariucci Arena.  Gunnar Meger, Dylan Lambert and Jonny Brodzinski tallied the goals for Blaine (6-0-2), which advances to the semifinals against Minnetonka Thursday.  The two teams tied 3-3 just last Thursday.  Nick Malvin stopped all 27 shots in nets for the Bengals, who were outshot 27-18 in the game, including 10-1 in the third period.

Hill-Murray 8, Breck 0
Ben Bahe racked up a hat trick and two assists to lead the Pioneers to an easy victory over Breck (5-1-0) in the quarterfinals of the Schwan Cup Gold Division at Mariucci Arena.  The Pioneers (6-2-0) sent the game to running time with a powerful offensive attack that pumped in eight goals on just 27 shots.  Zach LaValle chipped in with two goals and Kevin Becker had a goal and three assists.  Tim Shaughnessy recorded the shutout with 20 saves. 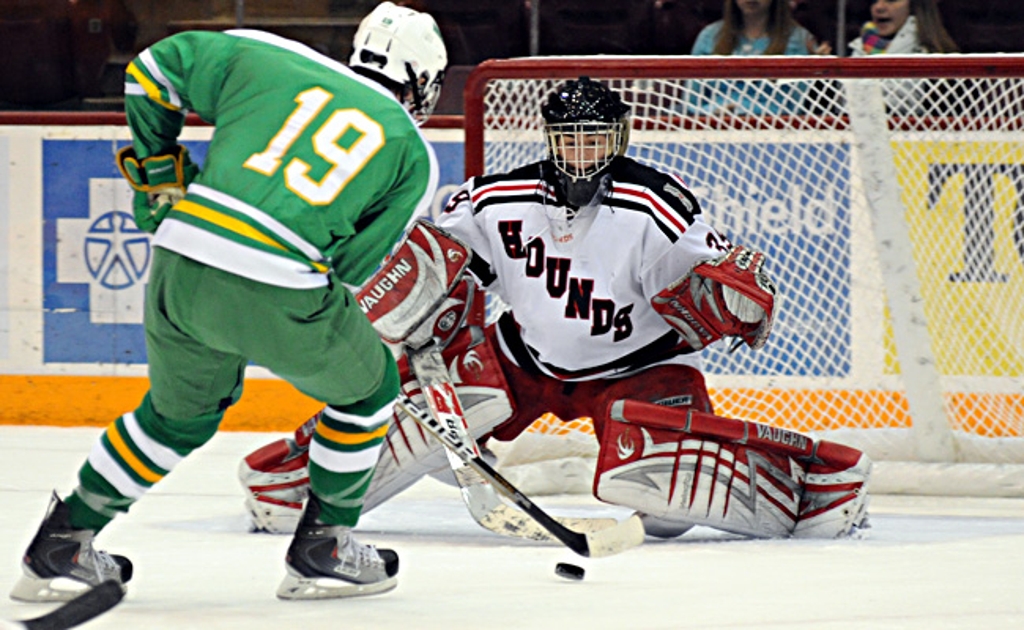 1. Alex Nelson, Edina
Nelson, a senior goaltender, got just his third varsity start but made it a good one.  Duluth East fired just 17 shots at Nelson, but nearly every one was a quality chance.  He was at his best over the first two periods, as he flashed a quick glove hand that allowed Edina to build up a 3-1 lead.

2. Steven Fogarty, Edina
Fogarty, a senior forward, tallied a pair of goals and assisted on the other two for the Hornets.  Both goals were scored on breakaways, as Fogarty took advantage of turnovers by the East defense.  He actually had a third open lane to the net, but was stopped by East netminder Joel Perlinger.

3. Jake Randolph, Duluth East
Randolph, a junior forward, was in on all three of East's goals, scoring the first and assisting on both of Trevor Olson's third-period goals that brought the Greyhounds back to a 3-all tie.  Randolph showed pin point passing skills.

Order photos from today's tournament from the Breakdown!