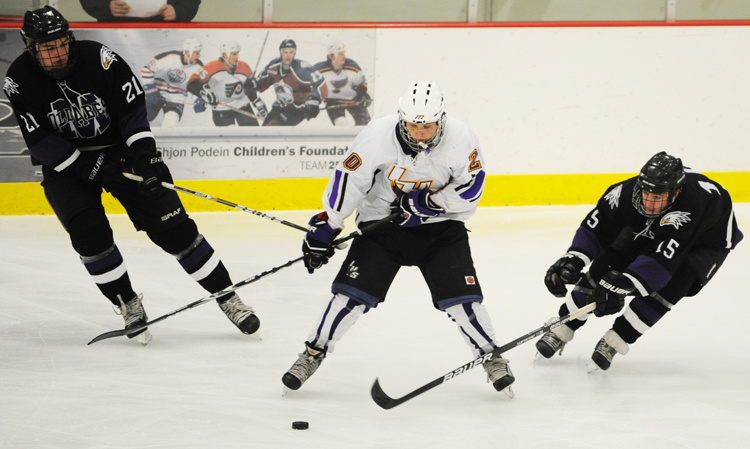 Look in the mirror and like what you see?

That was the reaction after Eau Claire Memorial, Wisconsin’s No. 1-ranked team beat Rochester Lourdes – ranked No. 4 in Minnesota’s Class 1A – 2-0 in the semifinals of the Rochester Kiwanis Hockey Festival’s Class A tournament.

The abundance of nodding and knowing looks came from all corners of Rochester’s Graham Arena on Wednesday, Dec. 29, after the highly anticipated matchup of unbeaten teams.

“They have a nice squad over there,” Lourdes coach Josh Spaniol said. “They just capitalized on the two chances they had and put the puck in the net.”

Brady Burzynski, a junior centering Memorial’s second line, scored twice in the second period to propel Memorial (13-0-0) over the Eagles (10-1-0).

“We knew they were going to be good, that they had some really skilled guys,” Lourdes defenseman Sam Slightam said. “We wanted to come out and stop their skilled guys.”

“We tried shutting down their top line, but the other guys stepped up.” 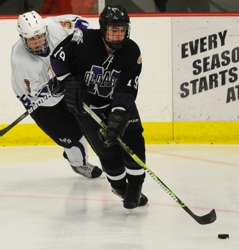 As one of those “other guys,” Burzynski played like THE guy for the Old Abes, showing a goal-scorer’s touch around the net on both his goals. Not bad for a guy who ranks fifth on Memorial in scoring with 20 points (seven goals, 13 assists), 10 behind top-line center Alexander Dahl.

“The first half of the year, the Dahl line has carried us offensively,” said Schwengler, who has built Memorial into a perennial Wisconsin power. “As we’ve progressed, the second line or whatever you want to call it, they are the line we are going to need to lean on.

“They are line, they have a little bit more moxie, they are little tougher to play against. Both (junior Matt Knapp) and (Burzynski) each had 40 points last year, so they can play and they can put the puck in the net.”

Injury depleted Lourdes couldn’t match Memorial’s depth at forward, as the Eagles’ top line of Jason Samuelson, Landon Farrell and Alex Funk – matched up mostly against Memorial’s top defenseman tandem of Mark Munger and Michael Kapla -- had its quality scoring chances limited to just one or two each period.

It was the sort of defensive effort – the Old Abes’ Saxton Soley was a block of granite in goal – that opposing teams have come to expect from … Rochester Lourdes. In fact, the two teams are similar in most every way, from the solid goaltending (Nick Heimer played well for the Eagles) to the strong defensive corps to the deep and balanced forward lines.

The similarities between Lourdes and the Old Abes (from the unbeaten records right down to the purple-dominant uniforms and Eagle mascots) explained much of the mutual praise being exchanged after the game.

“It’s been hard to find good teams that are willing to play us,” said Schwenger, who guided Memorial to an undefeated state championship season in  2007-08 and has struggled to get quality Minnesota teams on his schedule. “So when we get the opportunity we jump at it.”

For Slightam the loss meant he won’t be able to scratch “Win Kiwanis Hockey Festival” off his senior season bucket list. But, sounding like a coach, he also recognized the quality of the Eagles’ opponent.

“This is a good steppingstone,” he said. “Obviously a loss is not what we wanted, but we can build from this.” 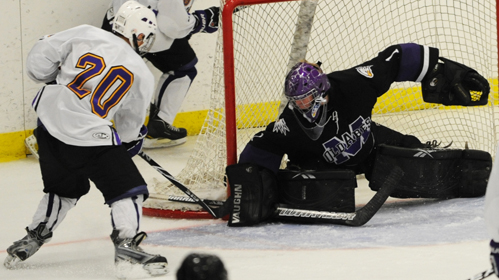 Burzynski scored both his goals from close range, the first coming on a backhand shot after he intercepted a loose puck in the slot and the second coming off a nice setup from Brady Bollinger.

Burzynski’s goals came during a 7 minute, 20 second-span in the second period and interrupted what was otherwise a tight-checking duel between two defense-first oriented teams.

Eau Claire Memorial improved to 13-0-0 with the victory while Rochester Lourdes, No. 4 in the Hockey Hub’s latest state Class 1A rankings, dropped to 10-1-0.

Saxton Soley, who played in the Upper Midwest High School Elite Hockey League this fall, made 19 saves to earn the shutout for the Old Abes. Lourdes’ Nick Heimer stopped 18 of the 20 shots he faced.

Memorial converted one of four power-play opportunities while Lourdes went 0-for-3 with the man advantage.

1. Brady Burzynski, Eau Claire Memorial
For a guy who centers the Old Abes’ “second” line, Burzynski sure played like a premier forward. Matched up mostly against Lourdes’ top forward unit, Burzynski, a junior, scored both of Memorial’s goals and had numerous other scoring chances.

2. Saxton Soley, Eau Claire Memorial
A shutout against Lourdes certainly is star-worthy, even if Soley wasn’t tested often. He turned aside 19 shots and wasn’t afraid to stray from the crease to gobble up loose pucks.

3. Alex Funk, Rochester Lourdes
Funk, a sophomore, used his quickness to create open space against a tough Memorial defense, and had some of the Eagles’ best scoring chances. 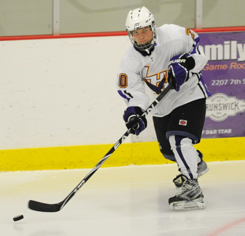