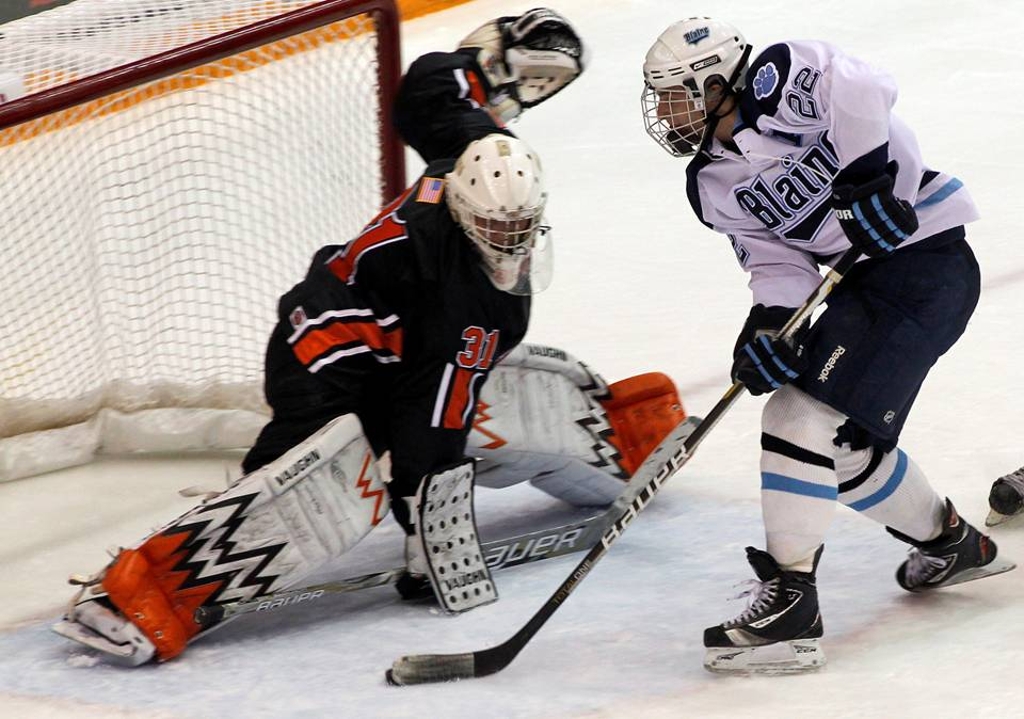 Blaine senior winger Jonny Brodzinski beat White Bear Lake junior goalie Jared Schletty in the second period for the final goal of the game in the Bengals’ 3-0 victory over the Bears in the Schwan Cup. Marlin Levison, Star Tribune

One had the look of relief, the other disbelief. Again.

For the second time in three weeks, the Skippers boys' hockey team staved off a furious rally by the Cadets to escape victorious. St. Thomas Academy scored twice in the final 60 seconds of regulation to tie the score in the opening round of the Schwan Cup Gold Division tournament Wednesday at Mariucci Arena. The elation was short-lived, however, when Skippers junior defenseman Michael Prochno popped in his second goal of the year at 1:09 of overtime for the 5-4 victory.

And it literally popped – as in up and over the head of St. Thomas Academy goalie Ian West, who never saw it.

"Throw pucks at the net and good things will happen," Urick said. "Especially in overtime."

The Cadets (3-2) jumped out to a 1-0 lead after the first period, but Minnetonka (5-2-1) responded with three unanswered goals in five minutes during the second.

As was the case in games with Benilde-St. Margaret's and Blaine – part of an 0-2-1 stretch before Christmas – the Skippers were unable to stay up by two Wednesday.

A.J. Reid's shorthanded goal for the Cadets at 11:44 of the third period made it a 3-2 game, but Minnetonka's Michael Helmer scored just over two minutes later to regain a two-goal lead. It didn't last, when St. Thomas Academy's Taylor Fleming and Eric Schurhamer scored 39 seconds apart to close out the third.

Schurhamer's goal came with just 20.3 ticks left, 22 days after STA scored 40.2 seconds before the horn to force overtime during the teams' first go-around.

"It comes down to our inexperience," Urick said, referring to 11 new players on this year's roster. "Can't be coaching, right?"

Urick was kidding, but whatever he said during the brief break between regulation and overtime worked a second time.

"We tried not to get down; we weren't losing or anything," said Thomas Schutt, who had a pair of goals for the Skippers. "We just went back to how we were playing before their goals."

Zach LaValle set the tone, and his teammates followed in a big way.

LaValle, not at all resembling a sophomore defenseman, whizzed a cannon of a slap shot from the left point past Breck goaltender Max McCormick 7:17 into the first period and the rout was on. Seven Pioneers goals followed – three off the stick of senior forward Ben Bahe – in an 8-0 victory that can only be described as unexpected.

"To be honest, we didn't even scout them," Hill-Murray coach Bill Lechner said. "We just kind of read it as we go. That first period we stayed conservative, see where the skill level was and kind of went from there."

Did they ever. Hill-Murray (6-2) scored four goals in the second period, more than Breck had allowed all season prior to Wednesday.

The defending Class 1A champion Mustangs (5-1) didn't record a shot on goal in the running-time third period until under five minutes remained.

It was Breck's worst loss since a 7-2 drubbing at the hands of St. Thomas Academy over two years ago, and the Mustangs' first defeat since a 4-1 decision at Shattuck-St. Mary's last January.

"The nice thing about this game is there's always tomorrow," Breck coach Les Larson said. "That's why we're here. We can redeem ourselves. We'll see what we're made of."

• Blaine got all the scoring it needed in the second period for a 3-0 victory over White Bear Lake. Gunnar Meger, Dylan Lambert and Jonny Brodzinski scored in a span of 7:18 for the Bengals.

• Edina advanced to the semifinals with a 4-3 victory over Duluth East. Jon Cote's second goal of the game with 4:51 left broke a 3-3 tie.

• COON RAPIDS 3, ST. PAUL ACADEMY 2: Seth Johnson scored with 1 minute, 24 seconds remaining, lifting the Cardinals over the Spartans in the quarterfinals of the Open Bracket in the Schwan Cup.

• STILLWATER 5, ROGERS 1: Blake Dochniak registered a pure hat trick, all on the power play, as the Ponies beat the Royals in the quarterfinals of the Silver Bracket in the Schwan Cup. He scored two goals 24 seconds apart in the second period.

• EDEN PRAIRIE 6, MAPLE GROVE 0: Kyle Rau had a hat trick, including the first two goals of the game, as the Eagles shut out the Crimson in the semifinals of the Holiday Hockey Classic in St. Louis Park. Patrick Heiller stopped all 20 shots he faced to register the shutout.

• LAKEVILLE NORTH 2, GRAND RAPIDS 2 (OT): Charlie Hayes  scored with 1 second remaining on the clock, giving the Panthers an overtime tie with the Thunderhawks in the Perpich North-South Challenge at Grand Rapids. Blake Winiecki, who set up the game-tying goal, scored a power-play goal 5 minutes earlier.

• BLAKE 3, ROSEVILLE 3 (OT): George Ordway scored a power-play goal with 2 minutes, 34 seconds left, giving the Bears an overtime tie with the Raiders in the quarterfinals of the Silver Bracket in the Schwan Cup.