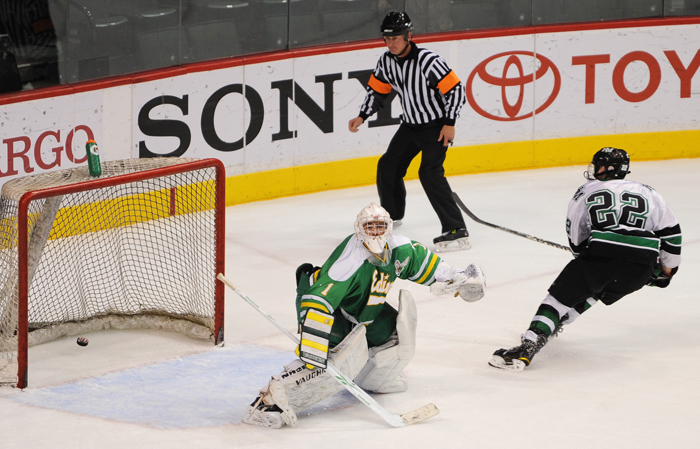 Bruski also dabbles in hockey, although he describes himself as a “third-line grinder.”

So when Hill-Murray coach Bill Lechner was naming the three players who would participate in the shootout to end a thrilling Schwan Cup Gold Division semifinal slugfest with Edina, it’s understandable that Bruski wasn’t paying full attention.

“I never expected it to be me,” Bruski said. “I heard (Lechner) say, ‘Ben Bahe,’ And I thought to myself, ‘Oh yeah, Ben Bahe. Makes sense. Makes sense.’

You know where we are going with this.

Out of a combined six players on two of the most talented teams in the state, it was only Bruski who could score in the shootout. He was the last of the shooters, and his goal, after the teams had skated to a 3-3 overtime tie on Thursday, Dec. 30, at the Xcel Energy Center, vaulted the No. 10 –ranked Pioneers (6-2-1) past the No. 3 Hornets (6-2-1) and into the Gold Division’s championship game against Minnetonka at the Xcel Energy Center on Saturday at 8 p.m.

“Bobby is kind of the throwback to the old three-sport athlete,” Lechner said. “He came in a little rusty, but I think he has scored four or five goals for us now. He’s got nice hands and nice feet. He’s a good athlete.

“He’s real calm. He’s the kind of kind where you almost think he doesn’t care. But he’s just got a very relaxed demeanor.”

Bruski’s heroics weren’t limited to the shootout. He also scored with 2:08 left in the third period to tie the score at 3.

On both of Bruski’s goals, he beat Edina goaltender Connor Girard with low stick-side shots.

“The same place both times,” Bruski said with a big grin about his clutch marksmanship. “That’s where I beat (Pioneers goaltender) John Dugas all the time in practice.”

Lechner said after the Pioneers’ coaches came up with their list of three shooters (Bahe, Kevin Becker and Bruski), they checked in with starting goaltender Tim Shaughnessy and Dugas to get their picks. Both goaltenders produced the same three names. 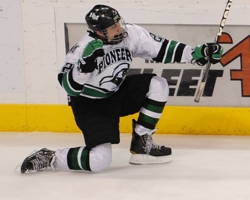 Edina, the defending state Class 2A champion, led 2-1 after the second period and well into the third. Then the teams exchanged three goals in a 2:55 span, with Bruski’s goal ending the fireworks just as his shootout goal ended the game.

“Do I like shootouts?” Edina coach Curt Giles said. “I guess not after tonight.”

Giles, like his good friend and counterpart in Lechner, wasn’t as much concerned with the outcome as he was where the Hornets measured up against one of the state’s top programs.

No doubt Bruski will, too. If anything, he’ll gain some confidence in his scoring ability.

And that big smile will be hard to erase for quite some time.

Not a bad night for a grinder. Not bad at all. 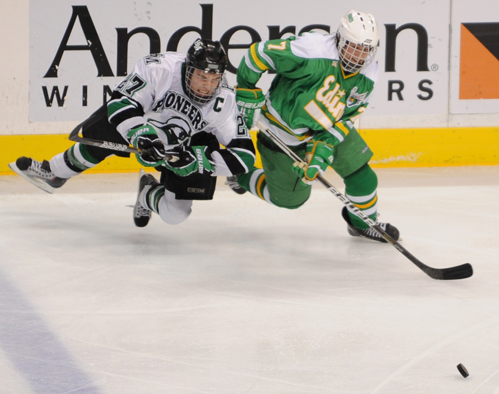 Senior forward Bobby Bruski scored late in the third period to force overtime and was the only player out of six to score in a post-overtime shootout as No. 10-ranked Hill-Murray got past No. 3 Edina in the semifinals of the Schwan Cup Gold Division on Thursday, Dec. 30, at the Xcel Energy Center in St. Paul.

The teams skated to a 3-3 tie in regulation, and the score remained that way after an 8-minute overtime period. The shootout format was used to determine who would advance to play Minnetonka in Saturday’s championship game.

Each team had three players in the shootout. Steven Fogarty, Michael Sit and Jake Sampson missed on their attempts, and Hill-Murray’s Ben Bahe and Kevin Becker also failed to score.

Andy Faust and Zach LaValle scored the other goals for the Pioneers (6-2-1). Mitch Pederson, Lou Nanne and Ben Ostlie scored for the Hornets (6-2-1).

1. Bobby Bruski, Hill-Murray
Who else? Bruski, a senior forward, scored the goal that sent the game into overtime and then was the only player to convert in the shootout.

2. Tim Shaughnessy, Hill-Murray
The senior goaltender stopped three of the most dangerous forwards in the state (Steven Fogarty, Michael Sit and Jake Sampson) in succession in the shootout.

3. Connor Girard, Edina
The senior goaltender made 25 saves, including six in the overtime period, and stopped two out of three attempts in the shootout. 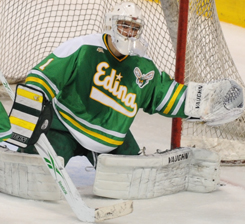