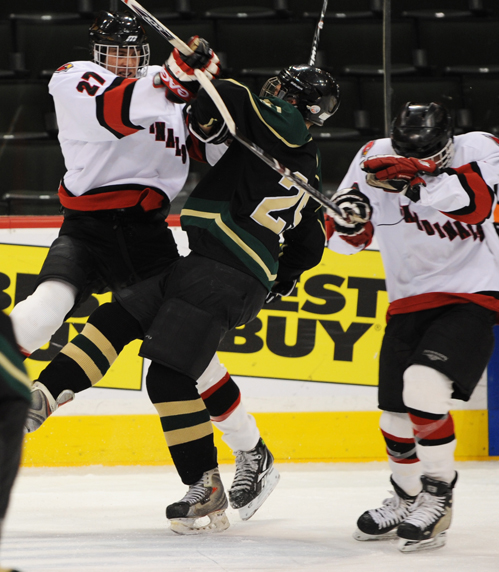 While a noon start on New Year’s Day might not be an optimal time for high school hockey, there are perks to playing the first of four Schwan Cup championship games at the Xcel Energy Center in St. Paul.

“We saw Pierre-Marc Bouchard walk in,” Coon Rapids defenseman Alex Wojciechowski said. “He said hi to us. That was pretty sick.”

With the Minnesota Wild practicing before the Schwan Cup’s Open Division championship game, players from both Coon Rapids and North Metro had the rare opportunity walk the arena’s hallways with their NHL heroes.

“They were real excited to play here,” Coon Rapids coach Brandon Mileski said. “They were wandering around, trying to look in the locker room. They were looking around the bench.

“I told them, ‘You can’t be distracting practice.’ ”

There were no distractions for Wojciechowski once he took the ice, as he had the game of his life by scoring twice and adding an assist – along with numerous thundering hits – in the Cardinals’ 6-3 victory over the Stars.

Wojciechowski, a 6-foot-4, 200-pound junior who also plays baseball, had scored one goal and had no assists in Coon Rapids’ first eight games.

“We don’t know what got into him,” Mileski said. “He’s a big strong kid. He can skate. He’s got great hands. We were kind of expecting him to do this all year and it hadn’t happened.

“He’s got the potential to be our best defenseman, he can be a dominating defenseman.”

That’s just what Wojciechowski was on Saturday. He started by throwing his big body into several North Metro forward, then revved up the Cardinals’ offense with end-to-end rushes that resulted in either goals or quality scoring chances.

“I finally got going there,” Wojciechowski said about his transformation from mild-mannered defenseman to game-changer. “I got my feet moving.”

The victory capped a perfect week for the Cardinals, who beat St. Paul Academy/Mounds Park Academy 3-2 in the quarterfinals then upended Providence Academy 2-1 in the semis.

Coon Rapids’ transformation into a championship team comes after the Cardinals went 5-22-0 last season. They are 4-5-0 after Saturday’s victory and, like Wojciechowski, rapidly gaining steam.

“This is a team that hasn’t had the most confidence,” Mileski said. “We’ve kind of had to work on being confident in their ability to play. Because they don’t believe they can win.
“Hopefully these last couple of games have sunk in a little bit. Hopefully they realize they can be a competitive team.”

Travis Ricci scored twice and added an assist for North Metro (3-6-0), which took a 1-0 lead on a Ricci goal 6 minutes, 4 seconds into the first period. The Cardinals (4-5-0) got goals from Anthony Podkpacz and Wojciechowski to end the first period and were in control the rest of the way.

Brady Driste and Bobby Smith also scored for Coon Rapids, which had defeated North Metro 5-2 in a conference matchup on  Dec. 21.

Travis Plante made 24 saves for the Stars, while Patrick Drazkowski had 15 saves for Coon Rapids.

1. Alex Wojciechowski, Coon Rapids
The 6-foot-4, 200-pound junior defenseman quadrupled his season point total by scoring two goals and adding an assist. All that, and he was one of the most physical players on the ice.

2. Travis Ricci, North Metro
The junior forward scored the first two goals for the Stars, doubling his season total, and assisted on the third.

3. Dylan Kuntz, Coon Rapids
Yet another player that somewhat unexpectedly excelled on the Xcel ice, Kuntz, a senior forward, had a goal and two assists. He had two goals in his previous eight games.