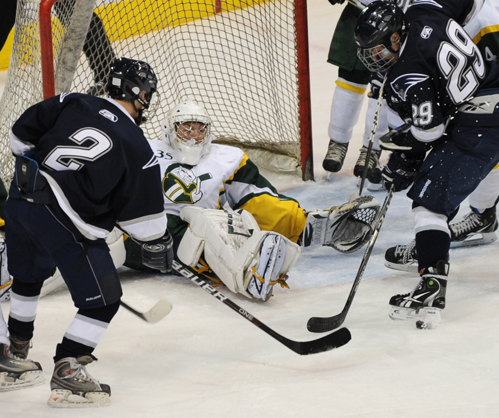 John McDonald has played in Iowa, spent countless hours on the pond in his his backyard and now, to top it all off, skated at the Xcel Energy Center in St. Paul.

Scored a goal, too.

“This was quite an experience,” said Champlin Park’s McDonald, last year’s team MVP and, as described by Rebels’ coach Pat Janostin, the team’s most consistent player again this season. “It was really fun. We came here a little bit early. Sat in the stands, walked around.

McDonald was one of six Champlin Park players to score in the Rebels’ 6-0 triumph over Mounds View in the Schwan Cup Bronze Division championship game on Saturday, Jan. 1.

A senior center, McDonald scored four goals and added three assists in the Rebels’ three tournament victories. But if you are looking for McDonald’s contributions to the Champlin Park’s success, Janostin will tell you the scoresheet is the wrong place. 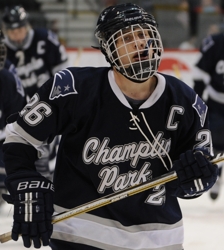 “There are so many flashy players in the state of Minnesota,” Janostin said. “But (McDonald) is not like that. We can toss him out there in any situation. He’s always effective because he does the work down low.

“Everybody on the team wants to play with him because he works so hard.”

Some of that hard work includes shoveling snow of the backyard pond.

“We put boards around it,” McDonald said. “We have spotlights.  I help get the snow off. It’s kind of a pain sometimes.”

“I was really happy to come back up here,” said McDonald, Champlin Park’s scoring leader with 18 points this season. “Hockey is pretty much everything for me. I’ve been doing it forever.”

After playing at the Xcel Energy Center, the state’s Taj Mahal of hockey rinks, it will be back to the pond for McDonald. He figured he might even skate there Saturday night.

“Yep, maybe with a couple of teammates,” McDonald said. “Mess around out there for a while.”

Sophomore Tyler Nelson made 21 saves and six players scored as Champlin Park beat Mounds View 6-0 in the championship game of the Schwan Cup Bronze Division on Saturday, Jan. 1, at the Xcel Energy Center in St. Paul.

After a scoreless first period, Champlin Park (5-4-0) erupted for four goals in the second.

Earlier in the day, in the first of four championship game at the Xcel Energy Center, Coon Rapids beat North Metro 6-3 in a matchup of Northwest Suburban teams in the Open Division.

1. Tyler Nelson, Champlin Park
The sophomore goaltender had lost three straight games before reeling off three straight wins in the Schwan Cup’s Bronze Division. He allowed four goals in the tournament opener, then two in the semifinals then none while making 21 saves in the title game against Mounds View.

3. Phil Boje, Mounds View
The senior defenseman provided a physical presence and was involved in some of the Mustangs’ better scoring chances.