Despite a losing record, Wayzata’s depth shines in 6-1 victory 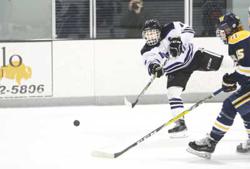 But, after two straight dominant performances over two conference rivals, Johnson was feeling good about his team’s chances against the defending Class AA state champions.

But as well as STMA and Rogers have played this season, neither team matched the skill level displayed by Wayzata in a 6-1 victory over the Bison last Thursday, Dec. 22 at the Civic Center.

“This isn’t a down year – they are very good,” Johnson said. “They have a Division-I defenseman, a Division-I forward, some young kids that scouts are looking at pretty hard. They’re a little frustrated at where their record is at, but that’s not a down year.”

But Wayzata turned a 1-0 lead after one period quickly into a 3-0 advantage with a pair of goals 2:23 apart to start the second period.

“It was probably that three-minute stretch that cost us the game,” Johnson said. “We gave up two quick ones. If we don’t have that, you’re looking at a 1-2 goal game and anything can happen when it’s that tight.”

The Bison cut the lead to 3-1 at 8:48 of the second on a power-play tally from senior Blake Habisch. Seniors Tom Rooney and Luke Ramsey assisted on the goal.

The goal was Habisch’s team-leading fifth of the season and team-high 10th point.

“Blake and Tom are great competitors,” Johnson said. “They are playing against other teams’ top lines and players. With our schedule the way it’s been, every night they’re going against D-I defensemen. They would like to produce a little more offensively, but our schedule hasn’t allowed that to happen.”

“I think it is super fun to play against some good players,” he said. “We have a speedy line and I like what we’re doing right now.”

Ramsey also has five goals and Rooney ranks second in team scoring with eight points. The trio each has a 3-game point streak.

Wayzata’s Jack Carlson gave the Trojans a 4-1 lead after two periods. He scored his second of the game at 5:53 of the third on a shot that deflected off a Bison defenders’ glove.

Andrew Urban rounded out the scoring on a breakaway with 9:22 left in regulation.

Coming off two impressive wins, Habisch is certain a loss to the defending champs will not kill any recent momentum heading into Christmas break.

“Overall, we had a pretty good game,” Habisch said. “We just had a couple unlucky bounces that put the score out of reach. There’s nothing you can do about that.”

“All-in-all, I thought our kids actually played pretty well,” Johnson said. “We battled our butts off and played hard. But against a team like that, if you make one mistake and it’s in the back of our net. But there are more positives to take away from a game like this then negatives.”

Having played one of the team’s toughest schedules in recent years, Johnson sized up last Thursday’s game as their biggest challenge.

“We’ve played Moorhead, Bemidji, and Delano, and by far Wayzata is the deepest team we’ve played,” Johnson said. “They don’t have the top-end dynamic guys like Delano has, but in terms of their depth, that’s the best we’ve seen.”

Buffalo will see more top talent when they return after the Christmas break for the annual 3-day Schwan Cup Tournament in Blaine.

“It’s a tough tournament, especially that silver bracket,” Johnson said. “Two years ago we beat Stillwater (last year’s Class AA state runner-up to Wayzata) in the first round. It’s going to be another tough year and Mahtomedi is a really good team.”

The opening game against the Zephyrs starts at 2:30 p.m. at Rink 4 on Thursday, Dec. 29. The winner advances to Friday’s semifinal game at 5 p.m. against the Breck versus Cretin-Derham Hall winner. The losers of both games play at noon on Friday. The title game is 3:30 p.m. Saturday, Dec. 31 at Ridder Arena in Minneapolis.

Other teams in the Silver Division include first round matchups between Anoka and Mounds View. Bloomington Jefferson takes on St. Michael-Albertville.

Habisch is hopeful that the Schwan Cup can begin the start of a strong second half push.

“We have to get rolling here, so maybe this will jumpstart us,” he said.