Cardinals pay tribute to teammate after loss to Dodge County 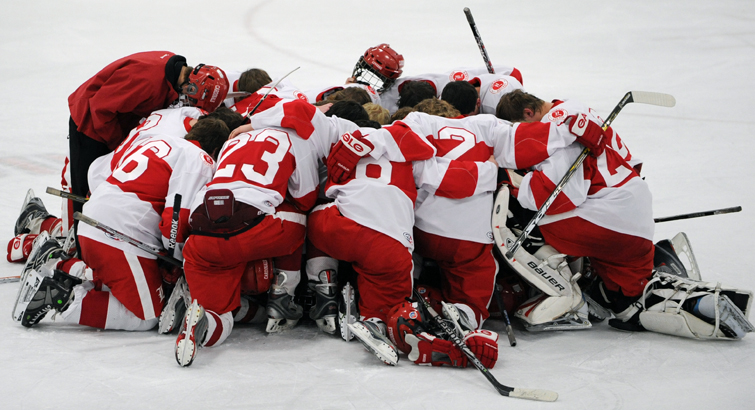 Luverne players dedicated a moment of silence to Curtis Maxwell Jr., the father of sophomore defenseman Austin Maxwell, after their game against Dodge County. Curtis Maxwell died in a car accident on Tuesday, Jan. 4. Photo by Helen Nelson

Luverne had just lost to visiting Dodge County 7-2, and Cardinals’ sophomore defenseman Austin Maxwell was waiting outside the door to the Wildcats locker room.

He had a few words he wanted to pass along.

The news about the car accident that killed Maxwell’s father, Curtis Jr., earlier in the week and had spread among the large contingent of Dodge County fans who made the three-hour trek across southern Minnesota to Luverne’s Blue Mound Arena for the Saturday, Jan. 8, matchup.

In a show of support for Maxell and his family – Maxwell’s mother, Sandra, remains hospitalized with injuries from the crash – Wildcats parents and fans “passed the hat” during the game. By the end, they had raised more than $400.

“They came down here on a charter bus, and they heard what happened,” Luverne co-head coach Tony Sandbulte said about the visiting Wildcats players, their parents and their fans. “They felt bad and wanted to help out.”

As Sandbulte was talking, he produced a plain, white envelope overstuffed with cash from his jacket pocket.

“Other communities have been respectful – really great about it,” he said.

Curtis and Sandra Maxwell were returning home to Luverne from the Cardinals’ game in Marshall on Tuesday, Jan. 4, when the head-on collision took place on Hwy. 23, about halfway between the two southwestern Minnesota towns.

Megan Stensgaard, 22, of Florence, Minn., was driving a Chevrolet Cavalier. Curtis Maxwell, 60, was driving a Chrysler sport van. Both were killed. Sandra Maxwell was taken to Avera McKennan Hospital in Sioux Falls, S.D., where she initially was listed in critical condition. 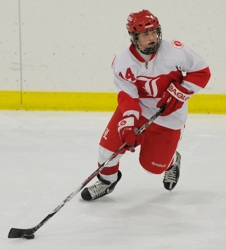 Sandra Maxwell’s recovery has gone well enough that she has been moved to a different hospital. The hope is that she’ll be coming home soon.

“I’ve been able to talk to her,” Austin said after Saturday’s game. “She’s feeling a lot better. She sits up.

“She wanted me to be here today.”

With friends and family in the packed Cardinals’ cheering section, and his extended family – teammates and coaches – with him on the bench and out on the ice, Maxwell took a regular shift, was steady in his own zone and dished out a punishing hit in the third period.

After the teams shook hands, Luverne players formed a circle and, with arms draped on shoulders, kneeled on the Cardinals’ logo painted on the ice nearest their bench. They stayed there for several minutes, long after the Wildcats had headed to their locker room. Luverne fans were glued to their seats while the Cardinals remained motionless on the ice.

“It was a moment of silence,” said Luverne senior forward Schuyler Swier, who scored one of the Cardinals’ goals. “Our thoughts have been on Austin all week, about keeping him strong.

‘We’re trying to do the best we can for him. Unfortunately, it is not enough.”

“It helps a lot,” he said about being with his teammates, many of whom also have been spending long hours in hospital waiting rooms as Sandra Maxwell recovers from her injuries. “I’m glad to have them. It makes it a lot easier.

“It has really changed the whole team, where we are a big family now. We are all looking out for each other.”

The generosity shown by Dodge County’s traveling contingent was merely an extension of what happened in Worthington on Tuesday night. Fans there also raised money for the Maxwell family, and when Austin scored in the closing seconds of the Cardinals’ 12-1 victory, they gave him a standing ovation.

“Their fans wanted him to score as much as we did,” Sandbulte said. “When he scored, he came around and pointed to the sky, the ref flipped him the puck right away and all the kids embraced him.

Luverne players and coaches have seen an outpouring of support from neighboring communities after Curtis Maxwell Jr., the father of Cardinals' sophomore defenseman Austin Maxwell, died in a car accident on Tuesday, Jan. 4. Photo by Helen Nelson

Added Cardinals co-head coach Derrick Brown: “It was one of the most touching things I’ve ever seen.”

Brown and Sandbulte estimated it took the Cardinals more than an hour to clear the locker room after that game.

“A lot of tears were shed that night,” Brown said.

By all accounts, the understated Maxwell never has been the sort who seeks the spotlight.

“He is a real shy kid,” Brown said. “He doesn’t want any attention on himself. He gets to the rink right before game time, he gets his gear on and he gets out.”

Senior Chad Mundy scored twice for Dodge County, a team that knows something about facing adversity. The Wildcats are playing without goaltender Axel Johnson, who died of cancer last fall. Johnson would have been a senior this season.

“Our coach told us before the beginning of the game that we needed to show good sportsmanship because of what was going on here,” Mundy said, his voice lowering to a whisper. “I don’t know, it is a tough deal.”

Wildcats coach Eric Hofmann said he learned of the accident involving Maxwell’s parents while talking to Luverne’s coaches before the game.

“I had no idea our parents were doing what they were doing,” Hofmann said. “I’m getting chills right now just talking about it. It’s just a nice thing, when people come together like that. It absolutely does put the game into perspective.

“We are all on the same side.”

Wildcats do their best work Shorthanded 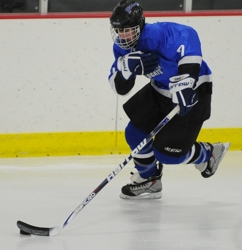 During the second period of Dodge County’s 7-2 victory over Luverne on Saturday, Jan. 8, it wouldn’t have been unthinkable for the Wildcats to intentionally take a penalty or two.

Or for the Cardinals to decline the resulting power-play opportunities.

“I told the ref to stop calling penalties on them,” Luverne co-head coach Tony Sandbulte said, only half kidding. “We got caught pinching and as soon as we did that they were flying into our end. (Chad Mundy, Sam Orth, Austin Head), when they get the puck, they know where they are going.

“They are getting down the ice.”

Head, a senior forward, scored the first shorthanded goal 10 minutes, 36 seconds into the second period. Dillon Stevens followed with another less than 4 minutes later and Chad Mundy tossed an oversized cherry on the trio when he scored a highlight-reel goal with 1 minute, 11 seconds left in the period.

“It’s not often you see a team score three shorthanded goals in a game, much less all in one period,” Dodge County coach Eric Hofmann said.

Hofmann, who typically doesn’t show much emotion on the bench, was noticeably impressed with Mundy’s shorthanded goal. The Wildcats senior used a series of moves to blow past a Luverne defenseman before popping the puck into the net.

“The guys know this, and anyone that watches, I don’t really show too much emotion on the bench for any goals,” Hofmann said. “(When Mundy scored) I jumped up and down like a like a little kid. I have never seen anything like that.

“To go inside outside like that, with one hand, and then to put it in backhand,” Hofmann said. “It was just unreal.”

“Oh, no,” said Mundy, who scored two goals against Luverne to boost his season total to six. “I don’t know, it just kind of happened. I don’t even know how to explain it. I was shocked afterwards.” 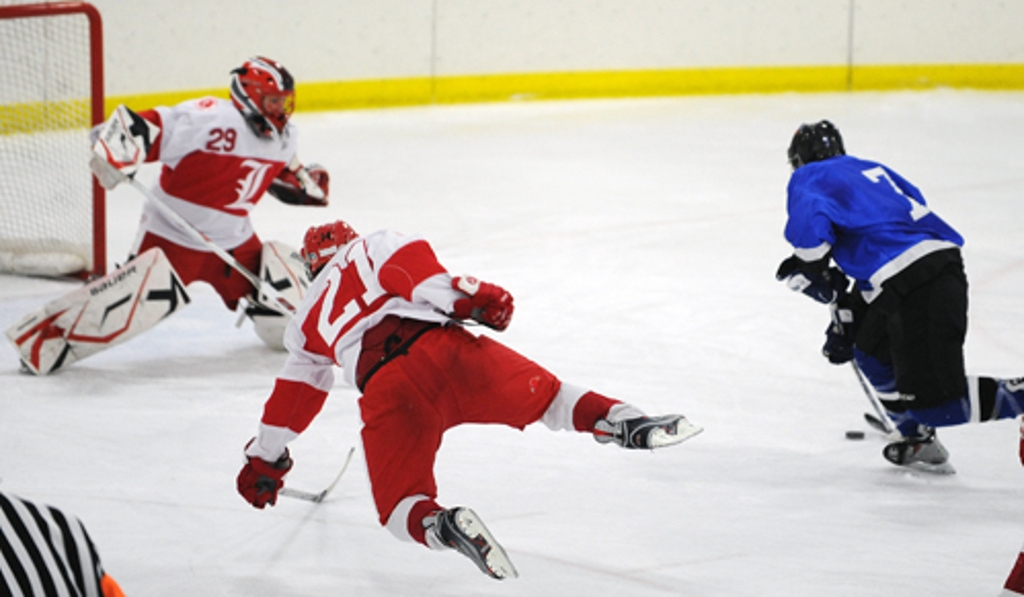 The Wildcats (5-5-0) were leading 2-1 when they scored their three shorthanded goals in a span of 5 minutes, 13 seconds.

Mundy’s goal was particularly impressive, as he put an inside-outside move on a Luverne defenseman, then went around Cardinals’ goaltender Kendall Meyer for a backhand tap-in that had the large and boisterous Dodge County crowd whooping it up from the visitor’s cheering section.

The arena went silent at the end in a tribute to Luverne sophomore defenseman Austin Maxwell and his family. After the teams shook hands, the Luverne players went to their knees and formed a circle around the Cardinal logo on the ice near the Luverne player’s bench.

They stayed there for several minutes in what was described by the players as a moment of silence to recognize the death of Maxwell’s father, Curtis Jr., who was killed in a car accident returning home from the Cardinals game in Marshall on Tuesday, Jan. 4. Maxwell’s mother, Sandra, still is hospitalized as she recovers from the crash.

Brady Dinger and Schuyler Swier scored for Luverne (5-5-0), with Dinger opening the scoring just 4:13 into the first period.

Senior Dustin Stevens made 16 saves for Dodge County. Luverne freshman Kendall Meyer had 15 saves on 21 shots before giving way to junior Nathan Thompson, who played the final 14:14 and stopped three of four shots. 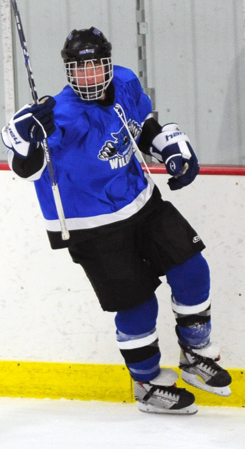 1. Chad Mundy, Dodge County
No matter what anyone else did, or might have done, Mundy locked down the No. 1 star with his dazzling shorthanded goal in the second period. The senior who plays both forward and defense, turned a Luverne defenseman inside out with a high-speed move that had SportsCenter written all over it before sliding the puck into the net after yet another slick move, this one on Cardinals’ goaltender Kendall Meyer.

2. Austin Head, Dodge County
Head, a senior forward, scored a goal and used his speed to wheel around the ice – and Luverne defensemen – on his way to numerous other scoring chances.

3. Tanner Keller, Dodge County
Keller had an assist, but the big (6-foot-3, 225-pound) defenseman made his presence felt with several thundering hits, including one in the third period that had fans on both sides ooohing and aaahing.