'The Week Ahead' features Section 7AA showdown between traditional powers 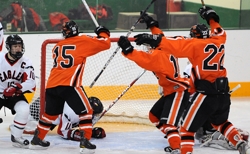 Grand Rapids celebrates a goal against Eden Prairie in the Thunderhawks' only loss this season (Photo by Helen Nelson).

When the season began, most experts figured Duluth East was a sure-fire favorite to repeat as Section 7AA champions.

The Greyhounds had a deep returning lineup with experience at nearly every position, as well as a talented incoming sophomore class that was sure to contribute.

All that has come to fruition so far for East (9-2-0), which has averaged 6.0 goals per game while only allowing a stingy 1.36 against.

And yet, the 'Hounds hold on the top spot in 7AA is as tenuous as it has been in the past several seasons.

Credit the resurgence of the Grand Rapids Thunderhawks, who head down US Highway 2 for a showdown with East this Thursday night on our Game of the Week.

The Thunderhawks (11-1-1) have lost just one game through the first half of their schedule (to top-ranked Eden Prairie in the Edina Holiday Classic in mid-December) and look like the most likely candidate to upset East's bid for another trip to state.

Coach Bruce LaRoque's club is a mirror image of the Greyhounds.

The Thunderhawks have terrific depth, as 14 players have scored at least two goals. They boast of a high-powered first line, with Patrick Moore (11-23-34), Travis Underwood (10-20-30) and Nate Mondry (10-5-15) leading the way, all with double-digit goals scored.

They have defenders who can both step up and join the offense, as well as keep their defensive zone responsibilities in check, such as Zach Dick (5-13-18) and Jake Bischoff (4-9-13).

And like East, they have terrific contributions from a host of players who have moved up from the Bantam A level, such as Bischoff and freshman forward Avery Peterson (5-4-9).

Add in a veteran goaltender with senior Dom DeGuiseppi (8-0-0, 3.04 goals-against average, .892 save percentage) and capable back-up Aaron Foss (3-1-1, 2.34 GAA, .897 save percentage) and you have a formula similar to the one Mike Randolph's Duluth East team has ridden to success. 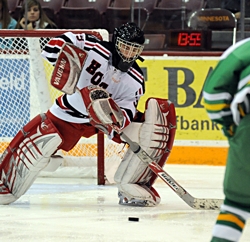 The scouting report is nearly identical for East.

The Greyhounds also have one of the best lines in the state in Jake Randolph (11-14-25), Trevor Olson (12-13-25) and Dom Toninato (11-13-24). That trio can dominate any opponent on any given night.  Their passing and puck control skills are nearly unmatched by any line in the state.

Sophomores Conner Valesano (5-6-11) and Ryan Lundgren (3-5-8) have contributed offense at times, but have been inconsistent in their first varsity seasons after moving up from Bantam A. But like Rapids' young 'uns, they're being counted on to provide plenty of help.

Jeanetta ranks second in the state in save percentage behind Little Falls' Michael Stumpf.

The granddaddy of all hockey rivalries, it was tough to slot this game into the No. 2 spot. But with all due respect to both programs, "The Game" has lost a bit of its luster in recent years because the two teams are in different classes (Roseau in AA, Warroad in A). Still, it's a war that will sell out The Gardens in Warroad and provide plenty of local fodder. Roseau lost its first five games of the season, but has rallied with seven straight victories behind goaltender Jared Strand. Until allowing three goals to East Grand Forks, Strand had given up exactly one goal in each of his first six varsity starts. Warroad has won six straight since an uncharacteristic four-game skid in December. The Warriors have allowed just eight goals in those six games.

Bragging rights on the Iron Range are up for grabs in this first of two matchups between long-standing rivals Virginia/Mt. Iron-Buhl and Hibbing/Chisholm. The Bluejackets have lost just one of their last 11 games (9-1-1) behind a super-charged offense led by two of the state's leading scorers: sophomore Adam Johnson (29-23-52) and senior Nick DeCenzo (14-37-51). They've already combined for 16 power play goals on a unit that's humming along at 34.7 percent. Virginia also has star power, with St. Cloud State recruit Garrett Hendrickson (19-22-41), quick forward Travis Eddy (11-15-26) and hard-nosed, tough defenseman Wes Judnick (4-18-22).

The Cardiac Kids from Edina barely have to hop in their bus for this road trip, but the short jaunt over to St. Louis Park should lead into a tough game against Benilde-St. Margaret's. The Hornets have already played nine -- yep, count 'em -- one-goal games this winter, posting a 5-2-2 record. The latest was a 5-4 thriller over Holy Angels in which Edina trailed 3-0 late in the second period before rallying with four third-period goals (two in the final 50 seconds). It might be said that the defending state Class 2A champions just know how to win. So does Benilde-St. Margaret's, which has won 10 of its 11 games with the only loss coming to No. 1 Eden Prairie.

Duluth East makes yet another appearance in the Week Ahead lineup thanks to a Saturday showdown against the state's No. 1 team (Eden Prairie). The Greyhounds will either make some hay this week or find themselves trying to rebound. Coach Mike Randolph's club looks like a title contender and this game will be a true test. Eden Prairie has risen back to the top spot in the state rankings with four straight victories behind a powerful offense that averages 5.55 goals per game. But it's the defense that has stepped up recently. In the last three victories, Eden Prairie has allowed just one goal (a 6-0 shutout of Maple Grove, 4-0 over Moorhead and 2-1 over Hill-Murray).

In the first year of the South Suburban Conference, these two powerhouses look to grab a stranglehold on the title. Through six conference games for most teams, Burnsville is still unbeaten (5-0-1), while Apple Valley is right on the Blaze's heels (5-1-0). This is the first of two meetings between the clubs, as they'll also get together in the regular season's final week (Feb. 12). Apple Valley boasts of the high-scoring underclass duo of Minnesota-bound A.J. Michaelson and highly-recruited Hudson Fasching, who have combined for 25 goals. Burnsville also has a superb first line and highly-regarded goaltender Bodhi Engum.

The battle for Lakeville always has significance, as bragging rights between the cross-town rivals are enough of a reward. Tack on the obvious South Suburban Conference and Section 1AA implications and the game could be a doozy. While both teams are hovering around .500, each is considered to be a possible favorite in the section. South started slowly, losing four of its first five games, but is unbeaten in the last four (2-0-2). The Cougars have a strong first line, led by Alex Harvey and Justin Kloos. North also gets much of its scoring load from its top line, paced by Blake Winiecki and Charlie Hayes (each with 12 goals). The difference could be North's Charlie Lindgren in goal.

Story lines abound in this rematch, although perhaps the best is to watch how each team responds to adversity. Wayzata was crusing along as the unbeaten No. 1 team in the state until running into Moorhead in the Hockey Holiday Classic in St. Louis Park on Dec. 29. Moorhead's 2-1 victory knocked the Trojans down (as did a loss the next day to Maple Grove). Wayzata remains dangerous, though, and should be looking for a bit of revenge. The game comes at a bad time for the Spuds, who were hit with suspensions in the wake of a hazing investigation. Moorhead will be missing several key players for two weeks.

Since being placed in Section 5A together, these two programs have combined to win every section title. That streak just may continue this winter, although Hermantown seems to have a leg up on the rest of the section and is the only remaining unbeaten team in the state (at least leading into the week ... the Hawks play Grand Rapids on Tuesday). Hermantown has adjusted to the loss of 14 seniors from its state runner-up squad, with veterans Garrett Skrbich and Jared Thomas combining for 30 goals.  Cathedral has much more scoring balance, but the key for the Crusaders has been defense. They're allowing just 2.09 goals per game.

The Mississippi 8 title will quite likely come down to these two teams, and it's been quite a battle in recent years. They've combined for the last three M8 titles (Buffalo with the first two and Rogers last winter) and split their two matchups last year, each winning on the other's home rink. While their records aren't impressive (Buffalo is 3-8-1 and Rogers is 5-5-1), they've both played difficult nonconference schedules.  Expect a low-scoring game, as the Bison (2.42) and Royals (2.36) both average fewer than 2.5 goals per game. Rogers' Zach Hnath (6) and Buffalo's Tyler Burg (5) are the leading goal scorers for each team, respectively.