No. 2 Edina survives another wild finish, beats No. 3 Benilde-St. Margaret's 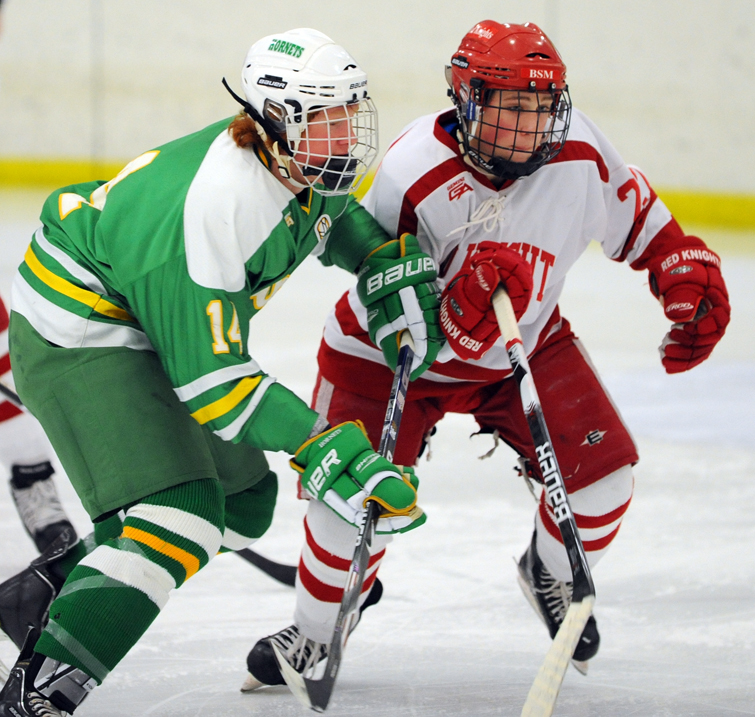 Edina players celebrate in the first period after Ben Walker scored the first of his two goals. Photo by Helen Nelson

Excitement, thy name is Edina.

If the Hornets aren’t scoring a goal – or two – in the final few minutes, they are allowing one.

If the Hornets aren’t winning – or losing – late in regulation, they are settling matters in overtime.

Sometimes, Hornets games go beyond overtime. Edina was involved in back-to-back shootouts in the Schwan Cup Gold Division over the holiday season.

“We like to keep the fans happy,” Hornets senior forward Michael Sit said after No. 2-ranked Edina beat No. 3 Benilde-St. Margaret’s 5-4 on Tuesday, Jan. 11, in yet another thriller. “Keep it close and exciting to the end.

“We would like to win by more, but I guess the close ones keep the fans coming back.”

Ten of Edina’s 13 games this season have been decided by a goal or have ended in a tie.

Here are some of the Hornets’ most memorable finishes this season:

On Dec. 29, Andy Jordahl scored late in the third period as the Hornets beat No. 6 Duluth East 4-3. 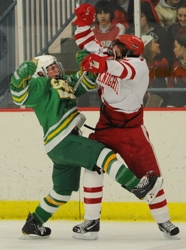 That pretty much summed up Edina’s – and Benilde-St. Margaret’s -- performance on Tuesday in front of a near-capacity St. Louis Park Rec Center crowd.

Edina’s “extremely well” spurt came in the second period when Walker, Bo Brauer and Sit scored during a 126-second span that ended with the Hornets leading 5-2.

Sit’s goal, which came with 3:39 left in the second, was a wrist shot rocket into the upper left corner. The puck sailed through a screen set up in front of Anders Jecha.

“My linemates did a good job of creating a little clutter in front of the net,” said Sit, who recently committed to play at Boston College, about the work of Preston Blanek and Nick Leer. “It was easy for me to find that corner because the goalie couldn’t see the puck.”

Benilde-St. Margaret’s (10-2-0) was whistled for four penalties in the second period and another to start the third. The Red Knights controlled play for most of the third period, when they outshot Edina 8-4.

“I just think that’s our good friend momentum,” Benilde-St. Margaret’s coach said about the Red Knights’ second-period meltdown. “I think it’s high school kids, they get a little off kilter. I can happen to any team.

Grant Besse scored with 7:33 left in the third period and Jake O’Borsky stamped the game as a thriller when he scored with 1:09 left.

“Tonight, I was thinking we were going to come out in the third period and shut them down, just because I thought we were playing pretty well in the first two,” Edina senior defenseman Max Everson said. “Hey, if we can win one-goal games, that is a good trait, too.” 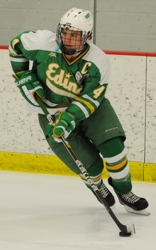 Benilde-St. Margaret’s junior forward Christian Horn suffered what might have been a concussion when he was the recipient of a punishing open-ice hit by Edina senior defenseman Max Everson near center ice in the third period.

“They were regrouping and Horn was moving, kind of looking behind him,” Everson said.  “It was one of those things where you could kind of see it coming before it happens. I just stepped into him.”

Horn, who ranks fourth on the Red Knights with 18 points, was knocked off his feet and stayed on the ice for several minutes before skating to the bench with help from his teammates. He did not return to the game.

“And it was almost in the same place on the rink, too,” Pauly said.

Everson, who on Sunday turned down a scholarship offer from the University of Minnesota to commit to Harvard, was called for an interference penalty.

“They called a penalty,” Everson said. “I thought the puck was there. It was close either way.

“It was one of those plays that if you can read it you can make that hit. That’s what happened.”

Ben Walker, Bo Brauer and Michael Sit scored during span of 2 minutes, 6 seconds in the second period to propel Edina to a 5-4 victory over Benilde-St. Margaret’s on Tuesday, Jan. 11, at the St. Louis Park Rec Center in a matchup of two of the state’s top four teams in the Hockey Hub’s latest Class 2A state rankings.

The Red Knights (10-2-0), tied with Hill-Murray at No. 3 in the rankings, rallied in third behind goals from Grant Besse and Jake O’Borsky.

With Benilde-St. Margaret’s goaltender Justin Quale pulled in favor of an extra skater and Edina’s Michael Sit in the penalty box for a contact to the head penalty, O’Borsky scored his goal with 69 seconds remaining to set up a frantic finish. The Red Knights had several close-range shots on Edina goaltender Connor Girard in the final minute.

It was a familiar finish for the defending state Class 2A champion Hornets, who have seen 10 of their 13 games decided by a goal or end in a tie.

Walker finished with two goals and Nick Leer also scored for the Hornets.

T.J. Moore scored in the first period for the Red Knights.

1. Ben Walker, Edina
A senior forward who runs on rocket fuel, Walker scored two goals, had a team-high six shots, drew a penalty and  and was flying up and down the ice all night.

2. Patrick Daly, Benilde-St. Margaret’s
A senior defenseman, Daly rarely left the ice in the third period as the Red Knights allowed just four shots while making their stirring comeback. He finished with two assists and one blocked shot.

3. Bo Brauer, Edina
A second-tier forward for Edina, Brauer, a sophomore playing his first season on the varsity, gave the Hornets a huge spark – and provided evidence of their depth -- by scoring a goal and adding an assist. 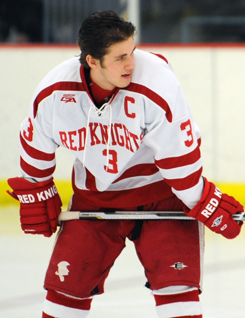 We're having technical problems so the actual comment stream isn't up and running.

Edina and B-SM tied 2-2, as live scoring shows. Big thanks to Todd Mulliken for handling the live scoring. He is nails. Thanks!

Lots of big hits and crashes to the net so far. One of the better games we've seen in terms speed.

There is a nice-sized crowd here to watch two of the top three Class 2A teams in the state. Not quite packed though, I don't think.

And yet another Edina goal! Michael Sit with a rocket into the upper left corner over Anders Jecha's blocking glove. I'm not sure Jecha saw that one. 5-2 Edina

Second period is over. What a period for Edina. Hornets finding plenty of room to operate in the Red Knights' zone. But if any team can rally to win a run-n-gun shootout, it is Benilde.

Hornets have been getting some good production out of their fourth line, which had at least two shifts that period. Brauer's line was out against B-SM's top line when it scored.

Stayed tuned for more on Michael Sit whose rocket in the second period was the prettiest goal of the night so far. He recently committed to play at Boston College, and we hope to talk to him about that after the game. We also hope to catch up with Hornets' defenseman Max Everson and ask him about his recent committment to Harvard.

Big guns for Edina -- Sit, Fogarty, Walker -- all playing well tonight. Christian Horn has been the best of the Red Knights' Big Three of Horn, Pat Steinhauser and Grant Besse.

Benilde-St. Margaret's calls a timeout to start the third period. Red Knights coach Ken Pauly is putting in a new goaltender, Justin Quale. And Quale is getting a warmup right now.

That's an interesting way to use a timeout. Not sure I've seen that done before.

Third period is underway, and B-SM starts it shorthanded.

Walker, Sit, Fogarty, Everson and Ostlie on the PP for Edina.

Edina's Andy Jordahl, a sophomore, draws a tripping penalty on Grant Besse. Another good shift for Hornets' fourth line. Take that back, it looks like Jordahl is playing on Edina's second line. Combinations have been a bit hard to track for Edina.

Red Knights' Nick Lauth missed on a good scoring opportunity on a pass through the crease. B-SM has been unable to convert a few golden chances tonight.

Benilde-St. Margaret's has been doing a good job of keeping the play in the Edina zone for most of this period. But the Red Knights don't have anything to show for all that pressure.

Edina's Max Everson just put a devastating hit on Christian Horn near the red line at center ice. Huge, huge hit. Horn is down on the ice and has been there for a while. Everson was called for interference. Looked like a clean hit to me, but on a hit that big -- at an opposing rink -- the refs have a tendency to make some sort of call.

Horn is up on his hands and knees onow and skating off the ice with some help. Hopefully, he just had the wind knocked out of him.

B-SM defenseman Patrick Daly has played just about every minute of this period. Quale off with 1:23 left in favor of an extra skater for the Red Knights.

And now Michael Sit is called for a penalty, so it will be a 6-on-4.

Great finish to a great game.

Stay tuned here for much more, including the game's three stars, a recap and a feature story.