Change in style for Farmington's Grubb

Short-tempered as a sophomore, Grubb now calm and productive 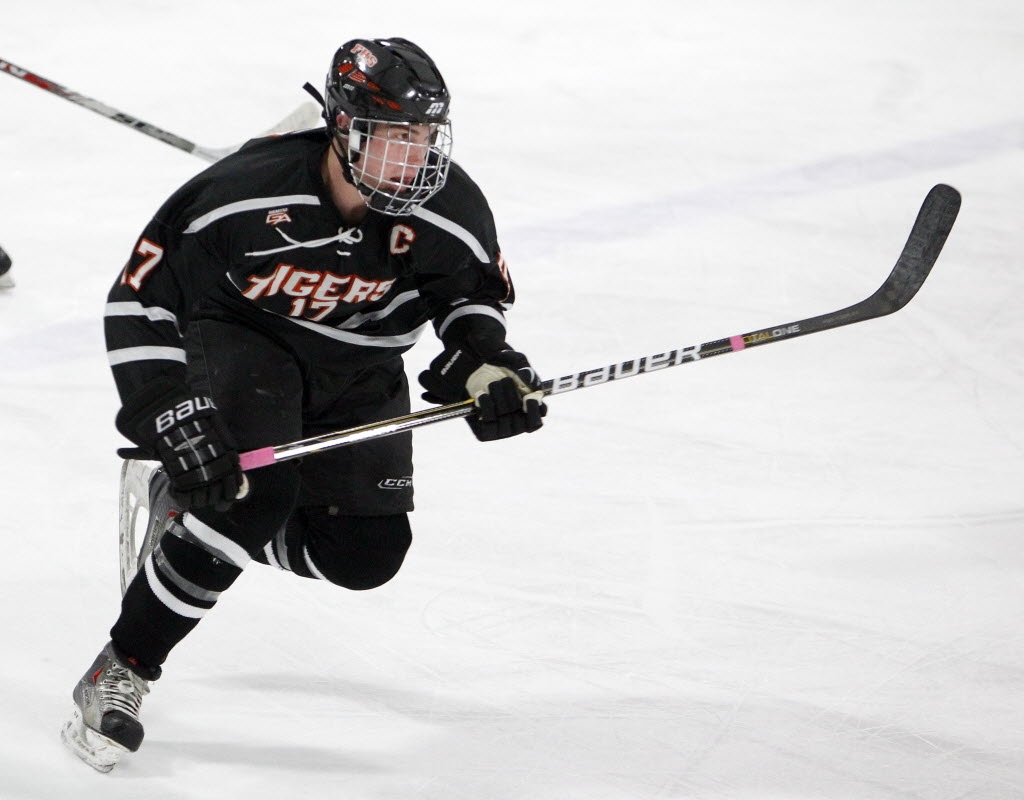 That was the old Tyler Grubb, who led Farmington in penalty minutes as a sophomore.

"After that last game last year, it took some time but all of a sudden it was like, 'Whoa. This is going to be my senior year,' " Grubb said. "I did a lot more hockey camps in the spring and summer. Got myself really ready for this season. I was probably more ready than I've ever been."

Through Farmington's first 13 games, Grubb has just six penalty minutes to go along with his team-high 29 points (17 goals, 12 assists).

He's had seven multi-point games including a six-point effort against Simley on Dec. 23. Multi-penalty games were the more common statistic not that long ago.

"I used to get a ton of stupid penalties; I was kind of a head case," Grubb said. "I just kind of looked at myself and asked if this was the kind of player I wanted to be, and it definitely wasn't. I had to change something."

Instead of retaliation, Grubb uses relaxation after the whistle.

"I want to be one of those guys little kids look up to," he said.

That kind of maturity is a welcomed sign to Revels.

"He's come a long way," Revels said of Grubb, a four-year varsity player. "In the past, a lot of times he'd take that penalty but now he plays through that. He'll score and I'll tell him on the bench, 'You know what? The Tyler of two years ago would not have scored that goal because he'd be in the penalty box right now.' He's starting to get it, and it's been fun to watch him grow up a little bit."

By nature, teenagers mature as they grow. But Grubb's turnaround has to be a form of coaching, right?

"If that were the case I think I'd be at a higher level," Revels said laughing. "I'm certainly not going to take any credit. I truly think he's turned a corner. He's seen the difference and he likes how he plays now."

Grubb's size (6-1, 205 pounds) makes him stick out on a hockey rink, yet he also shows the speed that puts him on Farmington's track and field sprint team during the spring.

Grubb's positivity has bled into the locker room. Even after an 8-2 drubbing at the hands of Holy Angels last Tuesday, the second six-goal loss in five days, the Tigers chose to focus on the positives at the next practice.

"After a game like that where we get totally killed, we could go down this negative road but that wasn't the case," Grubb said. "We had a fun practice. We skated, but we had no complaining about it."

Two days later, the team took out any leftover frustration with a 6-1 home victory over Northfield that raised Farmington's record to 7-6. Grubb had a goal and two assists.

He's one of 11 seniors on the Tigers roster, a group that as a collective whole has visions of taking the team back to the state tournament for the first time in over a decade.

"We've talked about this for – I don't even remember," Grubb said. "It's all we want to do, and I think we can. I think things could fall into our favor."