Holy Angels gets back on track

Tweaks to forward lines have helped turn around team's performance 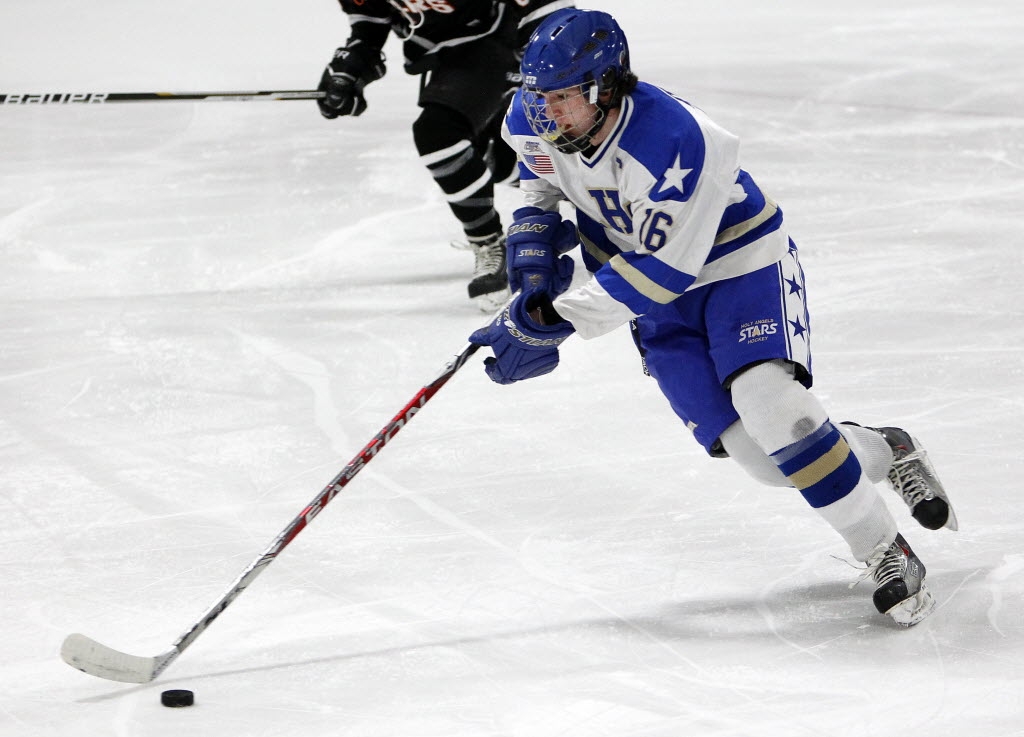 A tweak here, a tweak there and all of a sudden Holy Angels has it figured out. For now, anyway.

After starting the year 1-2, coach Greg Trebil elected to do something he and any veteran hockey coach would do for a spark. He switched up his forward lines prior to the Schwan Cup Silver Division tournament. It worked to near perfection.

The Stars won the opening game 6-5 over Burnsville, then followed it up with a 7-0 shutout over Blake and defeated Cretin-Derham Hall 8-5 for the championship on New Year’s Day.

“Because we tend to not play as many games early in the season, we start experimenting right away,” Trebil said. “But when we get to a certain point, you make those sort of getting down to business changes. It’s seemed to work pretty well so far, though that certainly doesn’t mean we won’t make [more] changes.”

For now, Trebil’s team is well on its way to being a serious contender with what they’ve got.

Holy Angels throttled Farmington 8-2 on Jan. 4, a game that had players eyeing 75 shots on goal after they peppered Tigers goalie Victor Simones with 43 through two periods while holding a 5-1 lead. The Stars settled for 59 shots on goal.

“We came in and said to just keep working around the net,” freshman Connor Hurley said. “We were trying to get 75 [shots]. We had a chant, ‘Get 75.’ It worked out pretty well; 59 is pretty good. We just wanted as many as we could.”

Even in the thrill of victory assistant coach Guy Olson still cautioned for the team to keep things in perspective.

“It’s coming along,” Olson said. “This game was a good experience for a lot of our guys, but we still have a lot of inexperience out there.”

Holy Angels jumped to a 3-0 lead over defending Class 2A state champion Edina on Friday, but the Stars gave up four third-period goals — the last two 22 seconds apart in the game’s final minute — to lose 5-4.

Though the team turned around and beat Shakopee on Saturday, there was hardly a good vibe.

“It’s a good bunch of kids, [but] any player that felt good about [the Edina game] would have been playing JV the next game,” Trebil said. “A good old fashioned barn-burner is great, but you like to win one once in a while.”

While leading scorer Joseph LaBate had a hand in all four goals against Edina (a goal and three assists), role players found their way onto the score sheet against Farmington while LaBate settled for a single assist.

Brendan Wise, Nick Sauro and Charlie Haben all recorded their first multipoint games of the season against the Tigers.

“I think at the end, we’re going to be a pretty good team,” Trebil said. “The key thing for us is if we keep improving. And of all the teams I’ve coached at Holy Angels I think this one will continue to improve and get way better.”