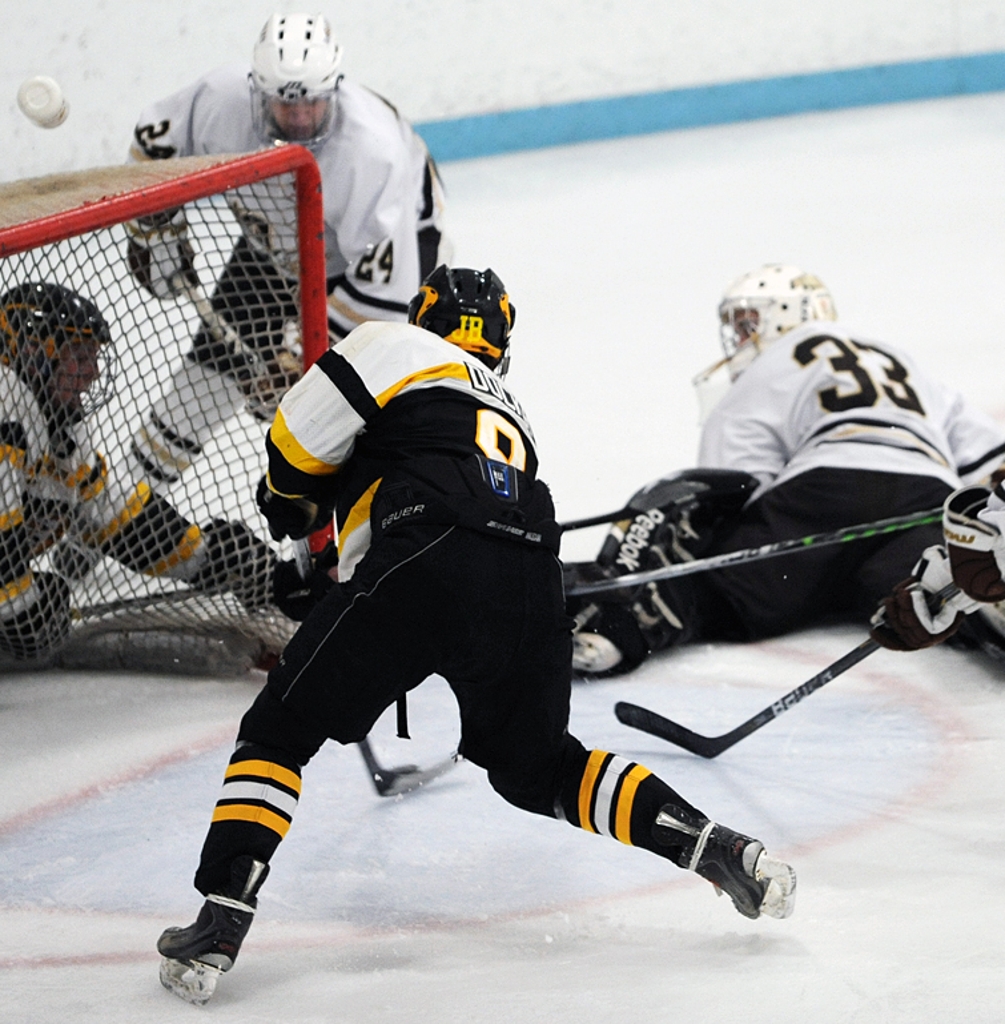 Burnsville senior Mike Dockry scored what proved to be the game-winning goal into an empty net in the third period. Photo by Helen Nelson 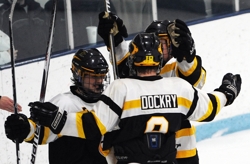 Burnsville's Mike Dockry celebrates with teammates after scoring the winning goal in the third period. Photo by Helen Nelson

It was the third period, and Burnsville was gassed -- running on fumes.

To make matters more tenuous, top Blaze defenseman Sean Madigan had been knocked out of the game with an injury.
And now Apple Valley was storming back. Eagles defenseman Derek Smith scored a goal, then another, then another.
“We were able to hang in there,” Burnsville coach Janne Kivihalme said after escaping the Apple Valley Sports Arena with a 5-4 victory over the Eagles on Thursday, Jan. 13, “we’ll take that as a positive thing.”
Positives? There were plenty for the Blaze in the first period. Mike Dockry, Burnsville’s leading goal-scorer, produced some a highlight-reel footage when he punctuated a goal with a headfirst dive over Apple Valley goaltender Aaron Gretz.
Jace Childs, another Blaze scoring standout, was standing behind the goal along the end boards when he banked the puck off Gretz and into the net.
Cory Chapman, yet another high-scoring Burnsville forward, made it look as easy as 1-2-3 when he scored from close range after a face-off.
“Really, we weren’t doing anything special,” Kivihalme said about Burnsville’s fast start. “We just played our hockey. Our goal was to play all three periods that way.” 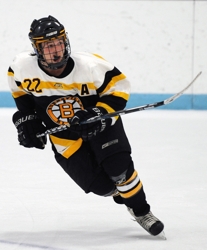 Burnsville senior defenseman Sean Madigan suffered an injury in the second period and did not return in the third. Photo by Helen Nelson

The game started to unravel for Burnsville (8-3-2) late in the second period at precisely the moment Madigan, a slick-skating, puck-moving senior, blocked a shot in the midsection while killing and Apple Valley power play. Despite being in obvious pain, Madigan stayed on the ice and continued his shift until the puck finally left the zone.
“He got hit in the privates,” Kivihalme said about Madigan’s injury. “That can be dangerous.”
Burnsville escaped the second period with its 3-0 lead intact, but Apple Valley (9-4-0) spent the break scheming its comeback. Eagles coach Jerry Hayes reminded his players about a Blaze loss to Holy Angels during the holiday break. Burnsville led 5-2 entering the third period before losing 6-5.
“We said, ‘Hey, let’s get the first one,' ” Hayes said about the third-period plan. “And then they get the first one. So, what do I know?”
Freshman defenseman Teemu Kivihalme, Janne’s son, scored less than a minute into the third to put Burnsville ahead 4-0.
Then it was Smith, a defenseman who had scored once all season, taking over the closing minutes. He scored his three goals in a span of 5:30. A senior who plays a stay-at-home style on team that features scoring standouts A.J. Michaelson and Hudson Fasching, Smith wouldn’t be the first – or second or third – choice when predicting who might notch a hat trick.
“Not Smitty,” said Dockry, who scored what proved to be the winner with 4:27 left. “But his shots were going in. He was getting the bounces.”
Apple Valley pulled within one with 16 seconds left on a goal by Tate Erickson.
“We need to come with more intensity,” Smith said. “It is always good to win the third period. Again, it gets to the point where that’s not good enough.”
The Eagles, who could have taken the lead in the South Suburban Conference with a victory, instead dropped to fourth place. Burnsville sits alone in first place after the win. 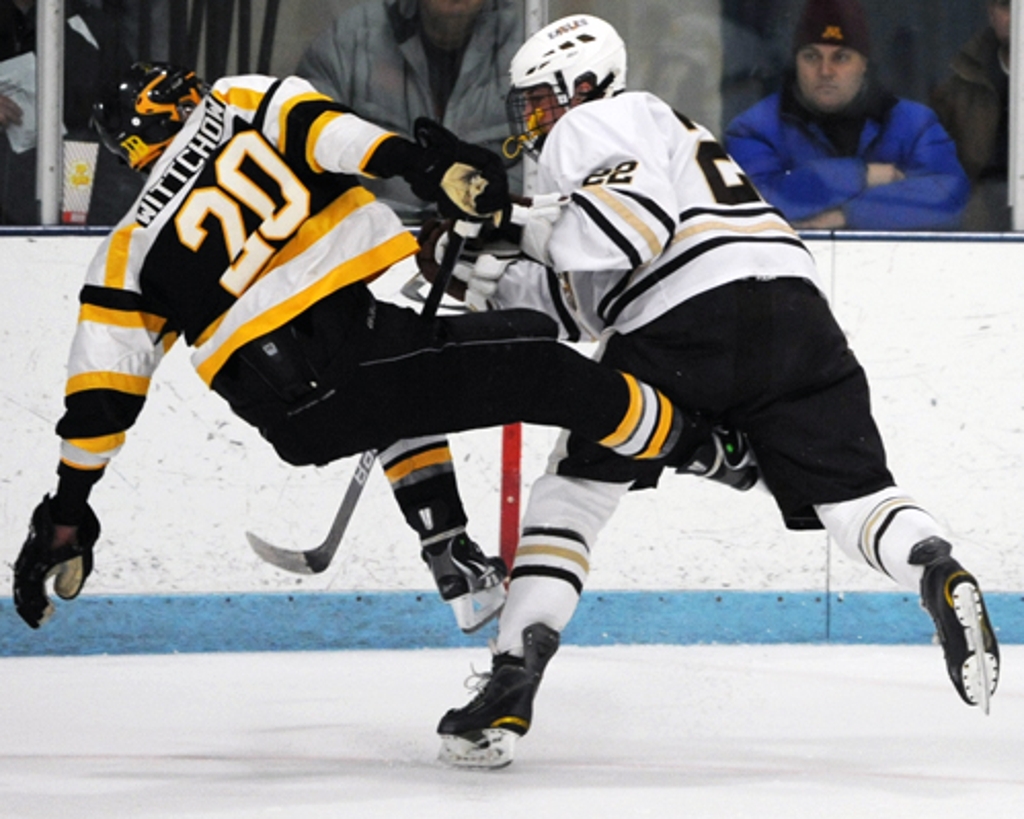 Burnsville senior Mike Dockry scored two goals, including the game winner with 4 minutes, 27 seconds left in the third period, as the Blaze held on to beat Apple Valley 5-4 on Thursday, Jan. 13, at the Apple Valley Sports Arena.

The Blaze (8-3-2) led 4-0 after freshman defenseman Teemu Kivihalme scored less than a minute into the third period.
Apple Valley (9-4-0) rallied in the third behind three goals from senior Derek Smith, who enter the game having scored once all season.
The Eagles’ high-scoring forward duo of Hudson Fasching and A.J. Michaelson was held to a combined one assist.
Burnsville senior goaltender Bodhi Engum frustrated Apple Valley through two-plus periods with his stellar play. He finished with 35 saves.
Apple Valley senior goaltender Aaron Gretz made 28 saves.
The Blaze held on for the win while playing the third period without the services of senior Sean Madigan. The defenseman was injured blocking a shot in the second period.

1. Mike Dockry, Burnsville
The senior forward opened the scoring in the first period with a gorgeous goal that culminated with a headfirst dive over Apple Valley goaltender Aaron Gretz. Dockry then banged home what proved to be the game winner with 4:27 left in the third on a goal that was more gritty than pretty. Dockry has a team-best 15 goals this season.
2. Derek Smith, Apple Valley
The senior defenseman, who had one goal entering the game, scored three in a wild third period as the Eagles valiantly tried to rally from a 4-0 deficit.
3. Bodhi Engum, Burnsville
The senior goaltender had Apple Valley’s big guns – A.J. Michaelson and Hudson Fasching -- shaking their heads in frustration most of the night as he came up with huge save after huge save. Engum, who proved mortal in the third, finished with 35 saves.