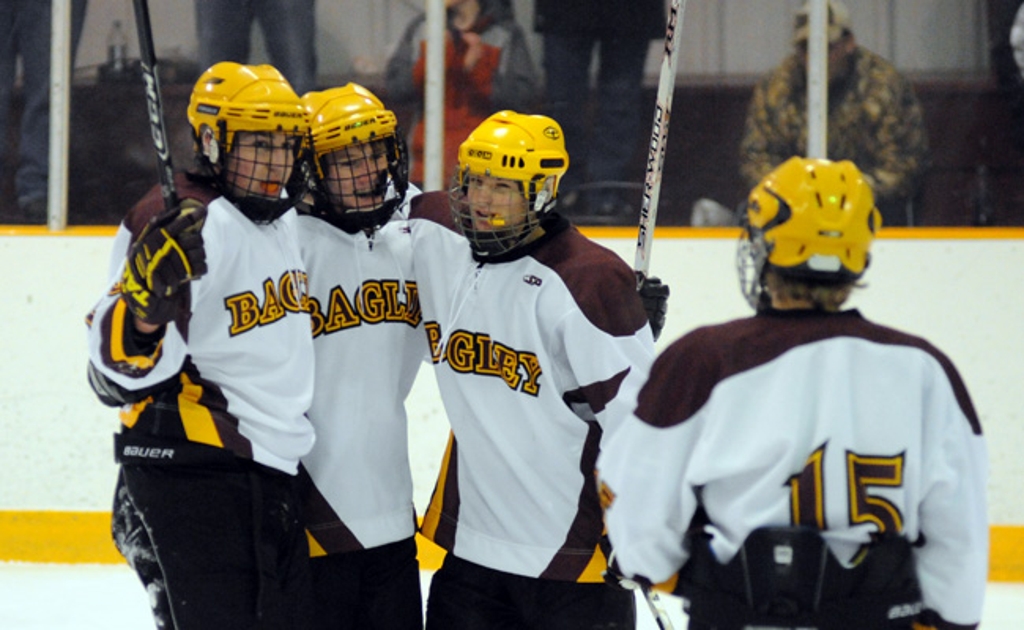 Bagley/Fosston celebrates one of its goals in a 7-6 overtime victory over Silver Bay (Photo by Tim Kolehmainen). 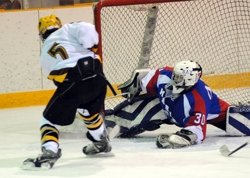 “We were trying to get a shot on net and have three guys crashing for a rebound,” said Bagley/Fosston coach Mike Olson. “That seemed to be the way the pucks were going today, just get it out in front of the net and start slapping away and good things will happen.”

The teams enjoyed big offensive games from their senior leaders, as Silver Bay's Warren Carter tallied four goals and Bagley/Fosston's Cole Young had a hat trick.  It was a true game of one-upsmanship in the third period, as the two traded four goals.

“I couldn’t have done it without my line mates. They were really passing well tonight,” said Young, sounding like a true leader.

Tied at 4-all entering the third, Young gave the Flyers (3-12-0) a one-goal lead, their first since blowing a 3-0 lead in the first period.  But four minutes later, Carter weaved his way through the Flyers defense on a short-handed one-man rush to tie it at 5-all.

With 4:47 left, Young slipped a shot off the near post to regain a one-goal lead.  But Carter again answered at 1:37, just seconds after Silver Bay (4-9-1) pulled goaltender Sam Andrus, to send it to overtime.

Both teams were playing back-up goaltenders due to injuries to their starters.  Andrus was starting in place of Alex Murray, who was out with an ankle injury, and finished with 30 saves on 37 shots.  Eighth-grader Andrew Gebhardt got the start for the Flyers, who were missing Kenneth Davis to a concussion, and made 21 saves.

“It’s maybe not the most opportune time to start your goalie, halfway through the varsity season as an eighth-grader,” said Olson.

Bagley/Fosston took an early 3-0 lead in the first period on a tired Silver Bay club, which was playing its third game in three nights on a road trip that included Eveleth-Gilbert and Red Lake Falls.  Young, Cole Gubrud and Jesse Dukek gave the Flyers a big cushion.

“We’re on a tail end of a long road trip and a long week,” said Silver Bay coach Shawn Bartlette, whose entire program has just 21 rostered players. “And we’ve been plagued by injury the last couple of weeks.”

But Carter and Tyson Fultz responded with goals 15 seconds apart in the final two minutes to cut the lead to 3-2.

Freshman Brad Rowlee and Carter gave Silver Bay its only lead, 4-3, with goals early in the second, before Sean LaVine tied it on a nice tap-in goal with 1:58 left in the period, setting up the third period heroics of Carter and Young.

“We showed great resilience in coming back and getting the win,” said Olson.

“This was good for us right here, this win,” said Young, whose team had won just two of its first 14 games, both against Ely. 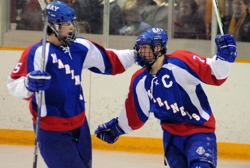 Silver Bay's Warren Carter celebrates one of his four goals on the afternoon (Photo by Tim Kolehmainen).

Silver Bay’s senior captain was a one-man wrecking crew on offense Saturday afternoon at Bagley, netting four goals as the Mariners hung with Bagley/Fosston until dropping a 7-6 overtime decision.

Carter helped the Mariners rally from a 3-0 deficit in the first period, scoring twice to give Silver Bay a short-lived 4-3 lead. After Bagley/Fosston regained the lead, Carter twice tied the game with goals in the third.

“We just came out slow. We weren’t playing to our full potential,” said Carter after the game. “We should have come out much harder.”

His offensive outburst was perhaps most impressive as Carter was in just his second game back from injury. He had played the previous night at Red Lake Falls, but didn’t seem to miss a beat Saturday.

The leading returning scorer for the Mariners, goals had been harder to come by this winter. Through the first 13 games, Carter had just four goals and three assists. But he was certainly due.

Silver Bay coach Shawn Bartlette described Carter as a shifty player with good hands, but not one with tremendous top end speed.

“When he gets that puck in front of the net, he has a good ability to put it in the net,” said Barlette.

Those hands and shiftiness were on display on Carter’s hat trick goal, in which he weaved through intense traffic on a short-handed rush before tucking the puck past Bagley/Fosston goaltender Andrew Gebhardt.

Carter described his game in much the same way. “Try to get around the defensemen, use screens were I can.” 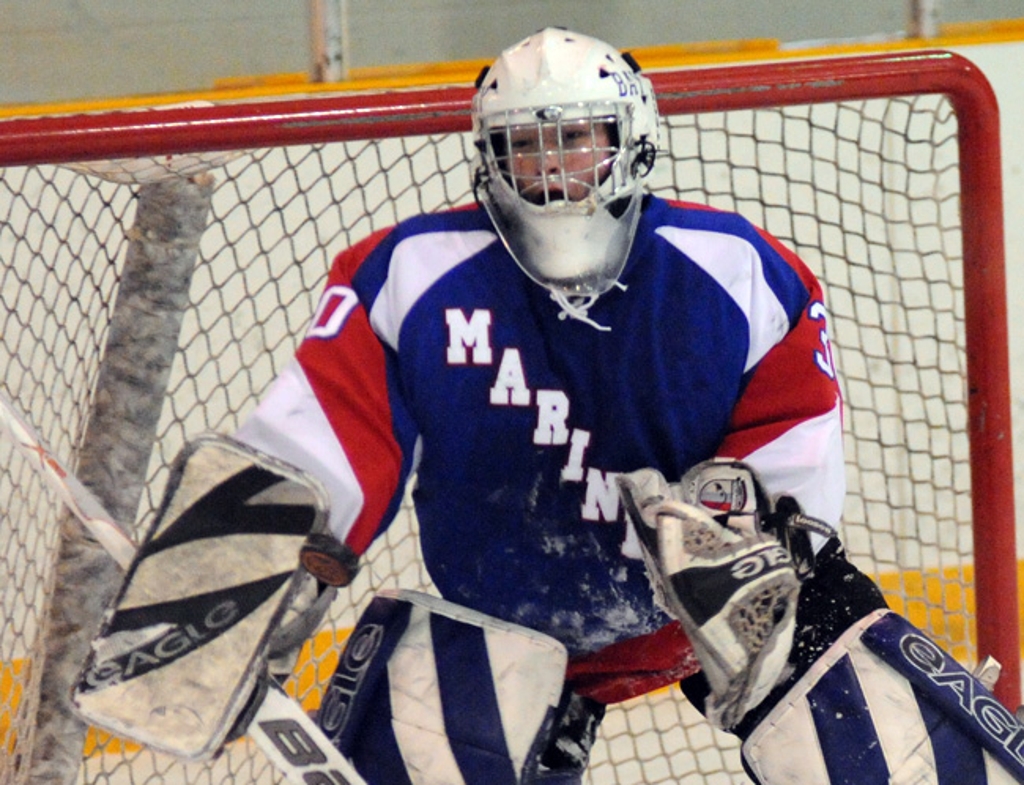 Our archived photos of the game number more than 300, so if there are any photos you may wish to purchase that aren't located in the gallery, please contact us at tim@breakdownsportsusa.com

1. Brenton Bergh, Bagley/Fosston
The junior forward did just what his coach requested, crashing the net on a long shot by Brady Anderson and hammering the rebound past Silver Bay goaltender Sam Andrus for the game-winner, just 1:15 into overtime.  Bergh also had a pair of assists for a three-point night.

2. Cole Young, Bagley/Fosston
One of just three seniors on the Flyers' roster, Young was a leader with his three-goal game.  He scored twice in the third period, each one giving the Flyers a lead.

3. Warren Carter, Silver Bay
The senior forward came back from injury with a flurry, scoring four goals as the Mariners rallied from several deficits in regulation to force overtime.  His third-period shorthanded goal tied the score at 5-all, then his fourth goal with 1:27 left sent the game to overtime.