Q&A with Jay Friberg of Tartan

Imposing defensemen is proud to be team captain 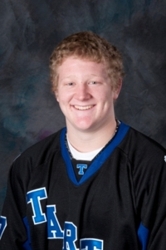 At 6-1 and 215 pounds, Tartan defenseman Jay Friberg is an imposing figure on the ice. He took a few moments away from intimidating opponents to answer a few questions.

Most memorable moment as a high school athlete? Being selected as the captain of the team this year

How old were you when you first started to skate? Since I was old enough to walk

Three things that you couldn’t play hockey without: My stick taped my way, my skates sharpened and my team around me.

If I couldn’t play hockey, I would…: [Be] a super fan for the other sports teams

Has playing hockey opened any doors for you? Yes, it has. It has opened the door of [leading] a team as a captain.

One small tip before a big game: Never give up

College or pro hockey? College, because it seems to be a better atmosphere with all the student fans.

Who is your hockey idol? Wayne Gretzky.

Something you would like to improve? My speed and being able to read the ice faster.

What is the best part about high school life? Sports -- and all the fans that come to the games.

What game on the schedule always gets the competitive fires burning? The North St. Paul games