State champions, the next generation

'The Week Ahead' features Class AA rematch between Minnetonka and Edina 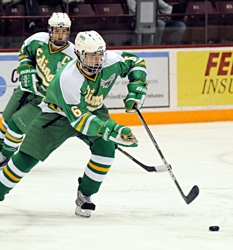 When we last visited this rivalry, Minnetonka and Edina were squaring off in the Class 2A state championship game last March. This rematch doesn't have the same cachet as that game, but it should be a great game nonetheless.

Edina (9-2-2), which beat the Skippers in that title game to win the 10th state championship in school history (combining the efforts of Edina East and Edina West in the 1970s), returned many of the same players that led it to the crown. The Hornets were expected to remain among the elite teams in the state and they've done just that through the first two months of the season.

But it hasn't been easy.

Just call them the Cardiac Kids.

Injuries have played a part, as defenseman Parker Reno will miss the season due to a knee injury suffered in the Upper Midwest High School Elite Hockey League and high-scoring forwards Lou Nanne and Jake Sampson have missed time, as well.

Steven Fogarty (10-11-21) leads the Hornets in scoring and has a great combination of size, speed and skill. He's the catalyst on offense along with Boston College-bound Michael Sit (5-15-20) and speedy Ben Walker (9-9-18).

Defensively, Harvard commit Max Everson (3-11-14) is the anchor of the unit. He's a hard-nosed, physical defenseman who is nearly impossible to beat one-on-one. 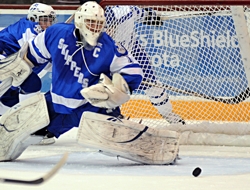 Minnetonka's Alex Glockner has been solid in goal this winter. Photo by Tim Kolehmainen

On the other hand, the Skippers (10-3-1) weren't expected to be among the top state contenders this winter, largely because of the graduating class they lost. Gone from the state runner-ups were D1 forward Max Gardiner, defensemen Justin Holl, Andrew Prochno and Troy Hesketh and goaltender Jim Kruger.

Lettieri, the son of former Minnesota Kicks' goaltender Tino Lettieri and grandson of hockey legend Lou Nanne, has been a godsend to the offense in his first year up from Bantams. He and Coatta are the only players with more than six goals through 14 games.

Defensively, the Skippers had growing pains early, but have really solidified in recent weeks, thanks to the defensive awareness of their experienced forwards.

Common opponents say this rematch could be a barn-burner.

Are these the two best teams in Class 1A? It can be argued against, particuarly among northern public school fans, but this is the best the Twin Cities offers among the small schools. Breck (8-3-0) is the two-time defending state champion, but lost a ton of seniors to graduation from last year's club. The Mustangs have had some growing pains, particularly in the Schwan Cup Gold Division, but those are their only three losses so far this winter. St. Thomas Academy (8-3-0) also tested itself with a tough Gold Division bracket in which it lost two of three games. The Cadets have yet to crank up their offense, as they're only averaging 3.82 goals per game. AJ Reid (10-10-20) is the only double-digit goal-scorer.

A rematch of the Section 8A title game from last winter, this very well could determine the top seed in this year's section playoff. Warroad (11-4-0) is on a big-time rolll, having won eight straight games while only allowing nine goals in that span. Junior goaltender Andy Foster (10-4-0, 1.90, .923) has picked up right where he left off last winter, providing a huge boost in goal for the Warriors. Warroad already has defeated Thief River Falls, 5-2, back on Dec. 21. The Prowlers (9-5-1) have pumped up their offense after the graduation of All-State goaltender Zane Gothberg. Micah Ranum (14-16-30) leads an offense that scores 5.20 goals per game.

It might not happen often, but each of these superpowers enters this week off a loss. Wayzata (12-3-0) was beaten for the second time by a shorthanded Moorhead squad this past weekend, while Eden Prairie (10-3-0) lost in overtime to Duluth East despite outshooting the Greyhounds by a more than 2-to-1 margin. Eden Prairie's Kyle Rau (18-13-31) and Wayzata's Tony Cameranesi (13-24-37) have to be considered among the favorites for the Mr. Hockey award. This game kicks off the amazing Lake Conference schedule, which also features Minnetonka, Edina and Hopkins battling it out from week to week.

The South Suburban race heats up with this rivalry between Burnsville and Eagan. The Blaze (9-3-2) are unbeaten in the conference (7-0-1) through eight games and can put some real distance between themselves and the rest of the conference. After a slow start, highly-regarded goaltender Bodhi Engum (9-3-1, 2.65, .901) has come on strong in recent weeks. Eagan (10-4-1) has been up-and-down, beating some top-level teams but also losing to unranked opponents. The Wildcats need a victory to get back on track. Will Merchant has 19 goals to lead the team, while no other player has more than Michael Zajac's nine goals. Eagan and Burnsville tied 2-2 back on Dec. 9, the only non-victory for the Blaze in conference play.

These two programs played one of the most memorable games in state history, a five-overtime victory for Apple Valley in the 1996 Class AA state semifinals over Duluth East. To put the time frame in perspective, this year's seniors hadn't started kindergarten when that game was played. While no one in this game had much of a connection to that classic (except Duluth East coach Mike Randolph), this one could also be a great game. East (12-2-0) is coming off a big week in which it beat both Grand Rapids and No. 1 Eden Prairie. Apple Valley (9-5-0) needs a victory against a big-time program, especially as the Eagles have lost two straight -- to Burnsville and Lakeville South.

The champions of the Schwan Cup Gold Division (Hill-Murray) and Silver Division (Holy Angels) get together for what should be a great private school battle in Richfield.  Hill-Murray (10-3-1) has recovered nicely from a slow start, thanks to a balanced lineup led by senior Ben Bahe (15-9-24). Fourteen Pioneers have scored at least two goals and 18 players have at least one point. Holy Angels (8-4-0) had its own slow start, losing two if its first three. Senior Joseph LaBate (14-10-24) and the brother combination of Cullen Hurley (13-14-27) and freshman Connor Hurley (5-20-25) have led the way for the Stars.

Quick ... which team has a better record so far?  If you guessed Totino-Grace (11-1-0), you're correct. The Eagles are rolling right along, but have yet to face their toughest North Suburban Conference rival. Sophomore T.J. Roo (12-22-34) leads a balanced offense that has four double-digit goal scorers (Roo, Danny Heck, Xavier Fust and Derek Loedermeier). Benilde-St. Margaret's (11-2-0) is the defending NSC champion and has had Totino's number over the years. Grant Besse (17-8-25) continues to prove he's an elite goal-scorer as just a sophomore, while defenseman Patrick Daly (3-18-21) just committed to the University of Wisconsin.

After Grand Rapids' two-loss week (to Hermantown and Duluth East), the door has been opened for Cloquet (12-4-0) to jump into the No. 2 seed in Section 7AA. Grand Rapids (11-3-1) still has the leg up courtesy of its season-opening 4-1 victory over the Lumberjacks back on Nov. 30, but the gap is closing. A Cloquet victory in this one could make the difference negligible heading into the final three weeks. Nolan Meyer (22-12-34) has been a terrific addition to the Lumberjacks after his transfer from Duluth East, while Karson Kuhlman (10-19-29) is the top-scoring freshman in the state. Jack McFarlane (14-20-34) is the son of NHL scout Tom McFarlane and is tied with Meyer and Ben Michaud (10-24-34) for the team lead in scoring.

Bemidji (14-1-1) has quietly been compiling one of the best records in all of high school hockey, but the Lumberjacks get a big boost in schedule strength beginning with this home game against Section 8AA rival Brainerd. Continuing their winning run could push the Lumberjacks into the top-10 in the Class AA rankings. Jeremiah Graves (12-1-1, 1.33, .935) backstops a defense that is allowing just 1.38 goals per game. Brainerd (11-4-0) was last year's darling in Section 8AA, but is coming off a disappointing 3-2 loss to Little Falls. The Warriors are a physical and aggressive team that can put the puck in the net. Josh Archibald (18-27-45), Mitch McLain (18-16-34) and Matt Pohlkamp (17-15-32) are all among the top scorers in the state.