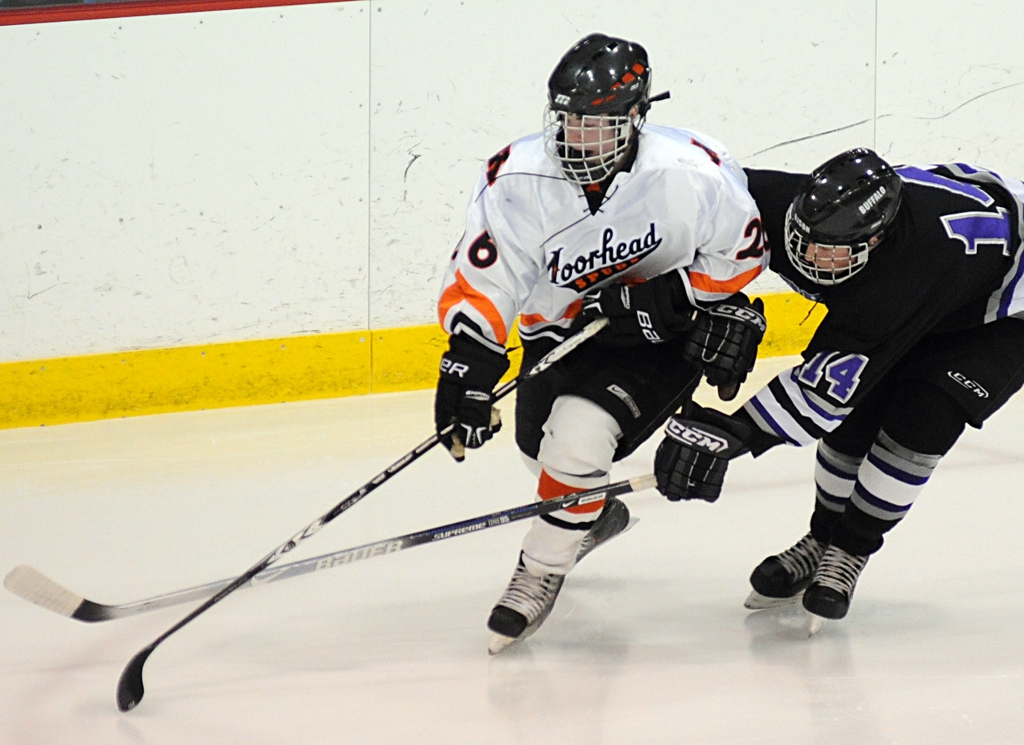 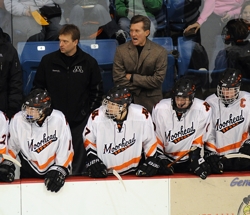 For much of the winter, Moorhead coach Dave Morinville has been juggling his forward lines, searching for the right combination. He knew there was no overnight fix, not after the Spuds lost 75 percent of last year’s scoring to graduation, leaving little experience returning. Sure enough, the result was a slow offensive start in which the Spuds struggled to find the net.

But after a 6-0 victory over Buffalo (3-10-2) Tuesday night at the Moorhead Sports Center, at least one piece of the combination seems to have fallen into place for Moorhead (9-4-1).

The line of juniors Logan Ness and Bryant Christian and senior Brendan Johnson combined to score all six goals, including three in a 1:44 span late in the first period that put the Bison away. Ness finished with a hat trick and two assists, Christian had two goals and two assists and Johnson had a goal and two assists.

“Tonight, that line carried us,” said Morinville. “They had the hot hand tonight.

Ness kicked off the game-winning outburst by tipping a shot from the point past Buffalo starting goaltender Blake Schmidt with 4:57 left in the first period. Just 1:31 later, the junior forward glided through the slot, took a couple of whacks at a rebound and hammered it home. Thirteen seconds after his second goal, Ness rang a snapper off the cross bar. The puck fell behind Schmidt before Christian tapped it in for a shocking 3-0 lead.

“It felt great, because I’m supposed to be one of the scorers for the team this year and I started out really weak,” admitted Ness, who added that Tuesday night should add to his confidence going forward. The hat trick doubled his goal total on the season.

“Logan Ness is a goal scorer,” said Morinville. “When he gets a chance, he has a heavy shot. His big thing was that he was shooting for the sake of shooting. And I think there’s a big difference when you shoot to score.

“It sounds simple. You have to shoot like you want to score.”

Ness admitted that he’d been missing the net on most of his shots, trying to be too fine in an effort to score. After a talk with Morinville, he changed his focus.

“You can’t score if you miss the net, right?” asked Ness.

The Ness-Christian-Johnson line has been together only for the last few weeks, although Christian and Ness played youth hockey together in Moorhead. They’d been separated at the varsity level until just after the holidays. With efforts like Tuesday night, they’ll be tough to split up.

Each member of the line also scored a goal in the second period, with Christian and Ness each getting a power play goal. After two periods, Moorhead led 6-0.

Meanwhile, Buffalo was equally shocked by the line’s scoring burst. The young Bison had played a tight-checking opening 15 minutes against Moorhead, until a short lapse broke the game open.

“We’re trying to put together a complete game,” said Buffalo co-head coach Cory Laylin. “We have a few lapses here and there. We have some flashes of a solid team and then we take a minute or two of here and there and that can be the difference in the game.”

Each team played two goaltenders in the game. Schmidt (10 saves on 13 shots) was pulled after allowing the three first period goals and was followed by Zach Zumbusch (23 saves on 26 shots). Michael Bitzer (10 saves) played the first two periods for Moorhead before giving way to Evan Cochran (eight saves).

1. Logan Ness, Moorhead
The junior admitted to a slow start to the season, but he certainly jump-started it Tuesday night against Buffalo.  Ness scored three goals (doubling his season total) and added two assists for a five-point night.  He got the Spuds going with two goals just 1:31 apart late in the first period and nearly added a third 13 seconds later.

2. Bryant Christian, Moorhead
Another member of the Ness-Christian-Brendan Johnson line who had a big night, the junior had two goals and two assists.  Christian now leads the Spuds in scoring on the season with 17 points (seven goals, 10 assists).

3. Brendan Johnson, Moorhead
It may seem unusual to name all three members of the same line as the Nos. 1-2-3 stars, but that's how strong a game the trio had.  Johnson, a senior forward, recorded a goal and two assists. 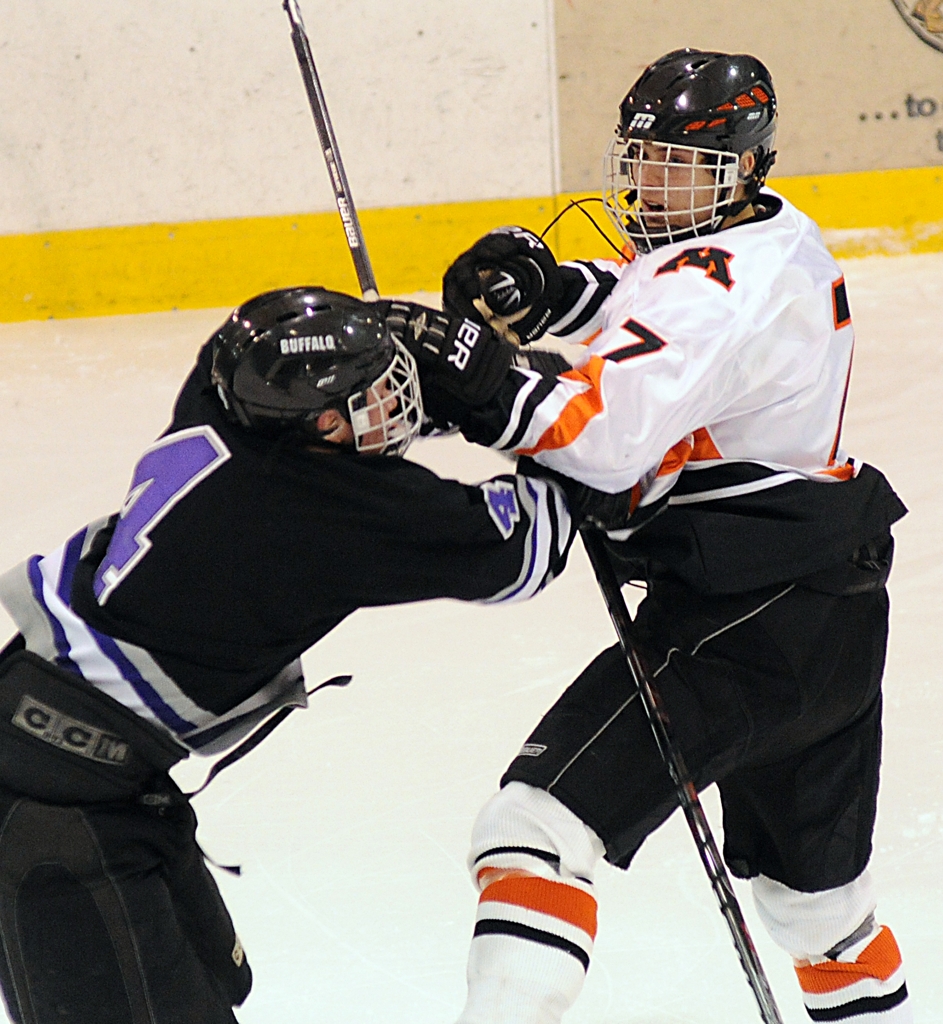 Buffalo's Tyler Burg (4) and Moorhead's Evan Cook (7) mix it up during the Spuds' 6-0 victory (Photo by Tim Kolehmainen). 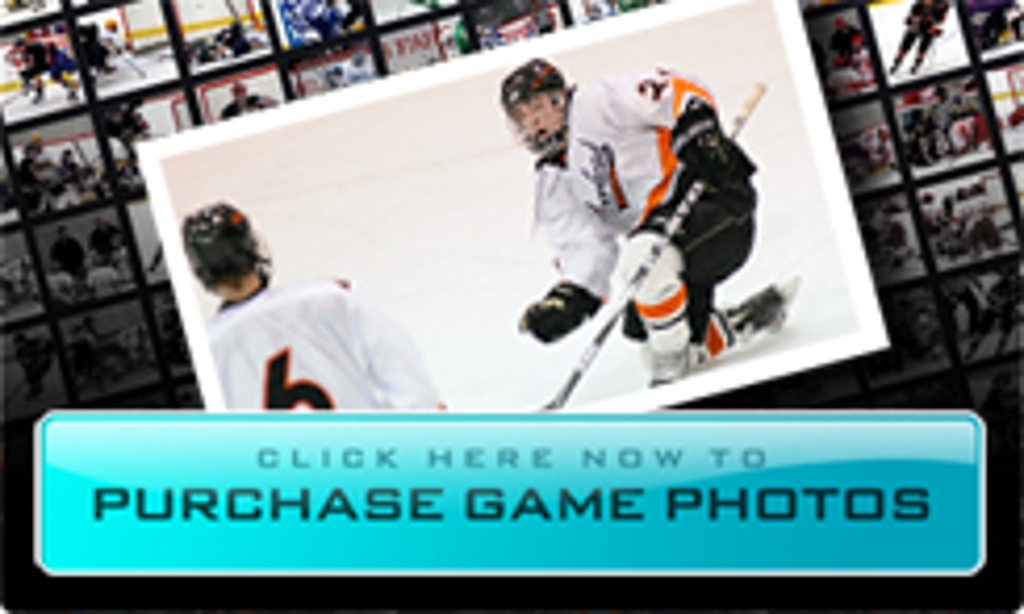 Our archived photos of the game number more than 300, so if there are any photos you may wish to purchase that aren't located in the gallery, please contact us at tim@breakdownsportsusa.com