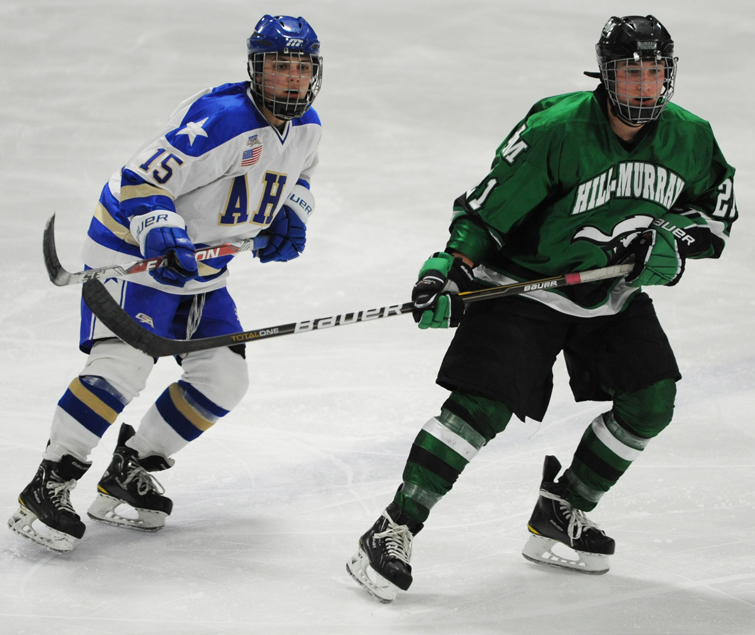 Looking at the statistics, it’s easy to see the talent those nine seniors bring to the Pioneers.

Together they combined for 8 points (3 goals, 5 assists) and 9 saves during the Tuesday, Jan. 18, 6-1 victory over Holy Angels.

It has been the impressive play by underclassmen, however, that has created excitement around the Pioneers.

“They're doing great and we also have Luke Voltin who's a sophomore and big, strong kid,” Hill-Murray coach Bill Lechner said. “They have great futures ahead of them. Our JV is doing well. Every year we purposely make our JV full of freshmen and sophomores knowing they'll be competing against older teams.

“It helps keep that flow going.”

Part of that flow involves skating younger players with the older ones.

“I mean playing with Ben (Bahe) is where everyone wants to be, I suppose,” LaValle said. “I was playing with him on the power play. He's just a smart player and knows what he's doing out there. It's nice to have a player like that.”

LaValle found himself playing with Holler and Voltin during the Jan. 18 game against Holy Angels. The line scored the first two goals of the game and combined for 6 points (2 goals, 4 assists).

“Voltin got that pass from Holler and he came into the zone and I was wide open in the slot and he gave it to me. It was a nice feed and I just put it home,” LaValle said about his first goal.

Lechner is starting to get more comfortable with what he is seeing each night.

“Like we told the guys, you don't want to be over-confident in January,” Lechner said. “We're starting to gel. We're getting some nice combinations. We're starting to like each other and believe in each other. We're moving the puck well and trust our systems.

“We're starting to get to where we want to be.” 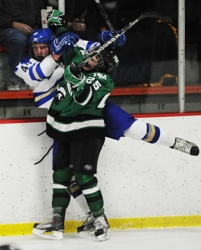 Hill-Murray is orchestrating an impressive comeback after a shaky start to its year, including a 6-1 victory over Holy Angels on Tuesday, Jan. 18.

“During the course of the years Coach Schafhauser and I have been together, we've traditionally guessed on lines,” Hill-Murray head coach Bill Lechner said. “We respectfully let the older guys get the first shot at the first line and the power plays. If they succeed, great. If they don't, you still try hard to get W's which we didn't early on. If it's not quite working, you gotta make a change.”

“We've moved the lines around three or four times in the last month and we're getting close,” Lechner said. “We're mixing and matching with guys that like each other and with different age groups.

Six Pioneers scored during the 6-1 winning effort over Holy Angels.

“We've been switching it up,” LaValle said. “It happens every year - if something doesn't work we change it up. Right now I think we got it going.

“It's working out well right now.”

Losing two out of the first three games of the season was not what Lechner and the Pioneers had in mind, but they have used the rough start as motivation.

“We divide the season into four chapters, so to speak,” Lechner said. “The first chapter is before the Christmas tournament. We say we're not going to be perfect and we're probably not go undefeated. We've done that in the past and we couldn't hang on to it. We got to state and we had nothing left.

“We've learned through the years by trial and error that it's ok to take a loss or two. You need to swallow your pride because you're going to be rated No. 2 in the state and all of a sudden you're No. 10 in the state and nobody believes in you. I say to ignore that and keep fighting through and it's been fortunate that it's starting to pull together now.”

Now, the Pioneers will work on keeping it together.

“We had good games this month and we're just hoping to keep it going,” LaValle said. 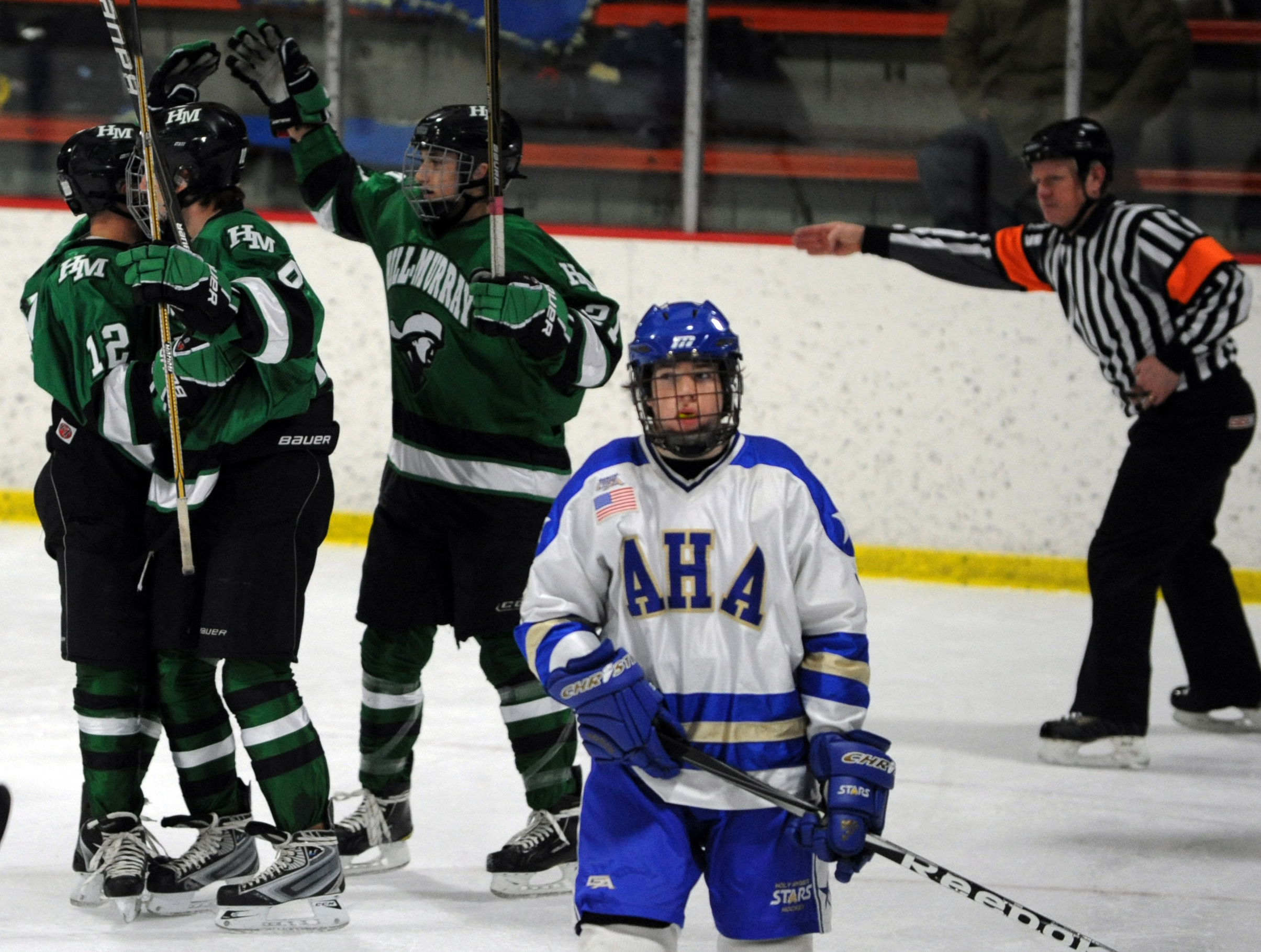 Six Pioneers scored and Hill-Murray's defense only allowed 10 shots on goal during the 6-1 victory over Holy Angels.

Zach LaValle and Ryan Holler scored the game's first two goals and each registered a goal and an assist. Luke Voltin and Kevin Schulze each provided two assists.

After jumping to a 2-0 lead in the first period, the Pioneers kept firing shots on Holy Angels' goaltender Brett Pierce and found scoring in each period.

Holy Angels had a tough time finding any scoring chances and only managed to put one shot past Hill-Murray's goaltender Tim Shaughnessy on a goal by Mario Bianchi.

Pierce made 25 saves on the Pioneers' 31 shots.

Up next for the Pioneers is a Classic Suburban conference game when they host Henry Sibley at Aldrich Arena on Saturday, Jan. 22, at 8 p.m.

Holy Angels will travel to Eden Prairie on Thursday, Jan. 20, at 7:30 p.m. to take on the third-ranked Eagles.

1. Zach LaValle, Hill-Murray
The sophomore forward started the game on a high note scoring a quick goal 1:11 into the first period. LaValle would also register an assist on Ryan Holler's goal just under 10 minutes later. LaValle's play in the first period stood out on his line with Holler and Luke Voltin and set the tone for the rest of the game.

2. Ryan Holler, Hill-Murray
Holler assisted on LaValle's first period goal and added his own 10 minutes later into the period. As a senior, Holler is the oldest Pioneer on his line with LaValle and Voltin (both sophomores) - the line that provided the game's first two goals. Holler's leadership as a senior and co-captain was apparent.

3. Joseph LaBate, Holy Angels
The senior forward was the definition of determination during the 6-1 loss. Despite the game's result for his team, LaBate played great hockey at both ends of the ice. Although his effort did not lead to many scoring chances, he did provide an assist on the Stars' lone goal. 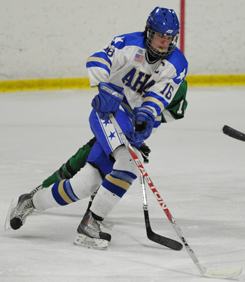