Bonner happy he stayed for senior season at Osseo 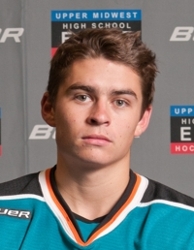 Graduation took a heavy toll on Osseo. Among the departed: twins Sam and Tom Windle, Patrick Bonner and James Hansen – the core of what many believed was Osseo's most talented team in several years.

Facing the prospect of a rebuilding year, leading scorer Tim Bonner explored his hockey options elsewhere. But ultimately, he is back in black and orange for his senior season and leading the Orioles on and off the ice. The 5-8, 175-pound Bonner centers the line of Casey Cardille and Tyler Dahlberg. The trio entered this week having scored 40 of the team's 57 goals.

Already this season, Bonner surpassed 2002 Star Tribune Metro Player of the Year Travis Morin in career goals at Osseo. And Bonner is a threat to Morin's all-time points mark as well.

Bonner spoke with Star Tribune reporter David La Vaque after Orioles' Friday, Jan. 14, loss against Maple Grove about staying at Osseo, leading teammates and his other athletic claim to fame – a hole-in-one.

Question: Given the group that graduated out last season, I thought Osseo might be going away for a few years. But you guys are 9-5 and playing well.
Answer: We have a lot of young guys but they can all play really well. It's just a matter of getting experience under our belts. Playing the big games like [Maple Grove] will help a lot. There was a lot of pressure going into this game.

Q: Your line has scored the majority of the team's goals. Do you three feel extra responsibility to come through?
A: We know we're the spark plug of the team and we try to get out there and be that. We had some chances [against Maple Grove], but sometimes you have nights where you can't put the puck in the net.

Q: Even though you guys didn't score, you can tell that you all know what you're doing. Is it as fun to play on that line as it looks?
A: Yeah, definitely. We just move the puck so well. We know where each other will be without having to look. Casey and I have played together growing up, but this is the first time we've played with Dahlberg. He blends in really well.

Q: Were you considering leaving high school hockey after last season?
A: It was an option. I was talking to a couple USHL teams and I got drafted by Aberdeen in the NAHL. I think if I was a little more forthcoming with the USHL teams about my plans, I would have had a better shot at it. Both teams I tried out for told me they wanted players who were more serious. I was one of the last kids cut from both of those teams. But I really liked staying home. You can't just leave your friends like that.

Q: Have you been trying to play more of the mentor role for some of your younger teammates?
A: One of our biggest problems has been throwing the puck around. I tell the younger guys to keep their composure because they have more time than they think.

Q: What is your overall message to your teammates?
A: Have confidence in yourself. Everyone who is on this team made it because they can play. You tell them that they could play growing up and it shouldn't be any different now.

Q: Switching to golf, I read that you made a hole-in-one when you were 13 years old.
A: Yeah, at Eagle Lake Golf Course. It was easily the luckiest shot I ever made. It was about 130 yards to the hole and I was probably hitting a 5-iron back then. It rolled up the grass of the fairway, it broke and rolled right into the hole. My brother and James Hansen were jumping around and screaming.