“I think it was a pretty strong effort up and down the lineup versus Princeton,” Johnson said. “I think everyone was excited to have the complete team back, which hadn’t been the case since early January.”

Suspensions, injuries, and illness plagued Buffalo in their loss to Chanhassen.

Senior Luke Ramsey was one of four regulars that returned to the lineup against Princeton and immediately made his impact known, scoring a pair of goals. He opened the scoring, with assists from seniors Tom Rooney and Nick Mueller, at 2:49 of period one.

Ramsey would later add an insurance goal making it 4-0 early in period three.

Buffalo came into the game averaging 3.1 goals per game. But most of their success, particularly in the conference where the team sits currently in first place at 7-1-0, has come from the strong defensive play. Buffalo ranks near the state leaders in team defense averaging just 1.9 goals against per game. 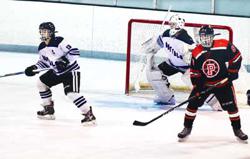 Nathan Mueller stopped all 17 shots in goal to record his 11th win and fifth shutout this season.

“I think it has become a source of pride for us to limit other teams’ chances and goals against,” Johnson said. “Because of the guys we have on defense and Nathan in goal, as a coaching staff, we have preached defense as a core value for this group.”

Buffalo’s defensive numbers would be even better if not for two lopsided losses coming earlier this year against two of the top teams in the state.

“Besides the Wayzata and Delano games, we have given ourselves a chance to win because of the buy-in from the team that we can hold opponents in check,” he said.

Princeton came into last Thursday’s contest with a losing record, but were the defending Section 5A champions from a year ago.

Next up for Buffalo is a 7 p.m. road game Thursday, Feb. 2 at Rogers. A key non-conference game at section rival Brainerd takes place at 2 p.m. Saturday, Feb. 4. Both the Bison and Warriors are fighting for one of four home seeds in the opening round of the section.