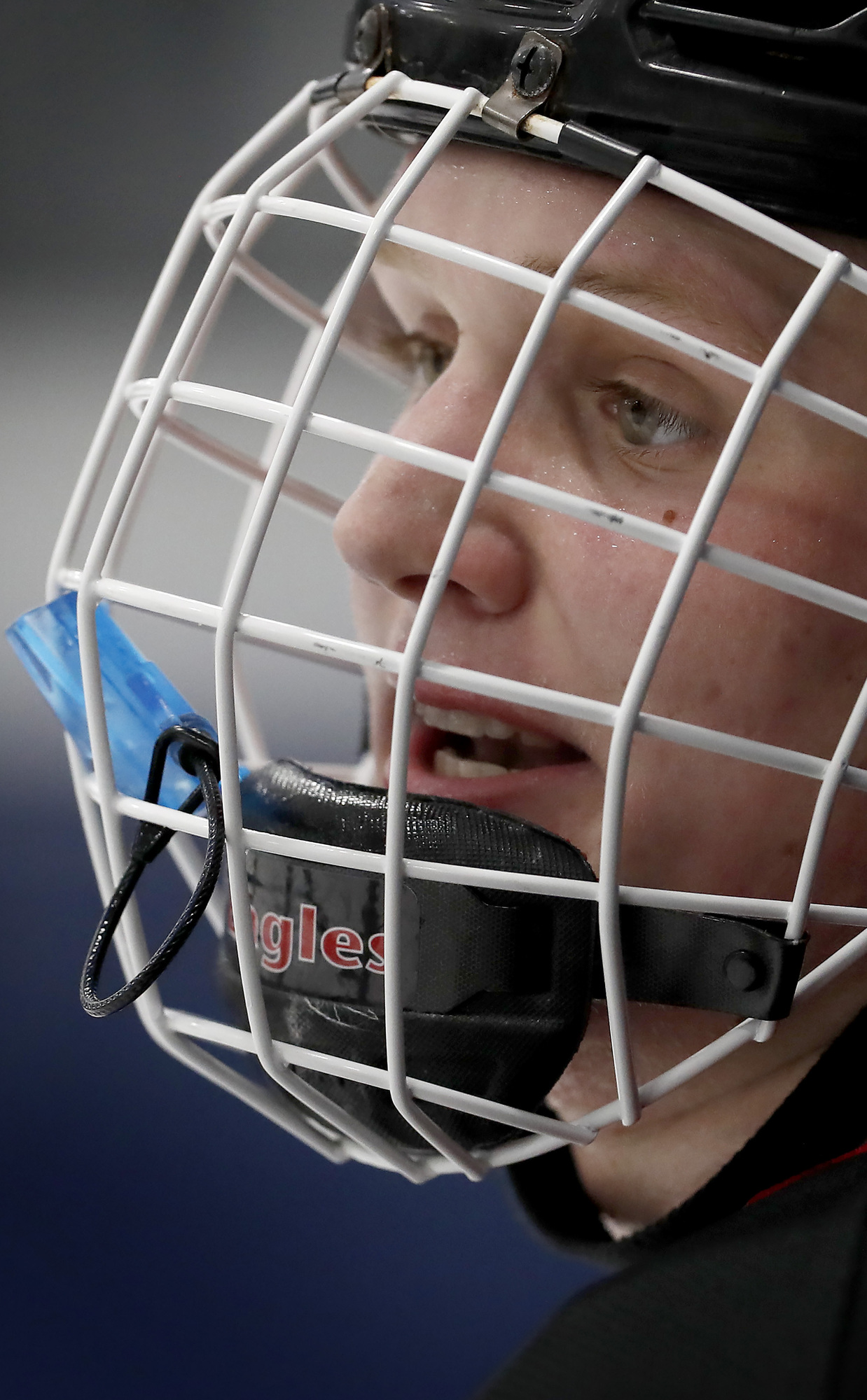 “Casey!” a young Minnetonka fan called out. “Can I have one of your sticks?”

Mittelstadt smiled before once again letting an equipment seeker down easy.

“I’m sorry, but I still have to pay for my sticks,” he said.

Not for much longer.

Considered a once-in-a-decade player by NHL scouts, Mittelstadt skates with a burst and reads plays like he already saw the game footage. He is projected to be a mid-first-round selection in June’s draft in Chicago. That makes the senior among the most coveted Minnesota high school players since 2007, when Cretin-Derham Hall defenseman Ryan McDonagh went 12th overall.

“Barry Sanders could run as fast laterally as he could forward,” Smith said of Detroit’s Hall of Fame running back. “Casey can do that with the puck, plus see his teammates and make plays.”

While several of his talented peers left high school hockey early, and with his parents encouraging him to do the same, Mittelstadt became the hockey-mad state’s poster child by deciding to stay through his senior season.

It wasn’t always this way. A self-described “pudgy kid’’ before high school, he battled through rejections by top select hockey teams as recently as eighth and ninth grades.

Now shadowed by foes on the ice and sought by media away from it, Mittelstadt takes the attention in stride. Unlike his stick policy, he gives of himself freely. Center two sophomore wings? Whatever is best for the team. Postpone a trip to Chipotle with teammates for yet another interview? Sure, no problem.

That’s all part of being the next big thing, a track Mittelstadt started once he committed to the Gophers before ever skating a varsity shift. He became the next hope for Eden Prairie fans who cheered Mr. Hockey recipients and state champions Nick Leddy and Kyle Rau.

Making good on his considerable potential, Mittelstadt led Eden Prairie to the state tournament in 2015 and ’16. He electrified the Xcel Energy Center crowd by tallying 12 points (five goals, seven assists) in three games last March, the most since Dave Spehar posted 13 (nine goals, four assists) for Duluth East in 1996.

A state title remains the ultimate prize. Mittelstadt made his intentions known in May when he tweeted, “one more go at the dream with the boys I grew up with.”

The dream, after a rough patch of games in late December, is drawing closer. His Eagles started 2017 with a 11-0 record. Mittelstadt averaged three points per game — 10 goals and 23 assists — in the hot stretch.

Had he listened to his parents, he would be playing this season with the Gophers.

“My wife, Dede, and I said, ‘We think you should go,’ ” said Tom Mittelstadt, who spoke for Eden Prairie hockey fans and the sport’s stay-in-high school advocates when he added, “‘But we’re glad you’re home.’”

There is no consensus whether a young player with NHL potential should leave high school early to better grow his game. So Mittelstadt’s decision to stay brought advocates and doubters.

“There’s an increased understanding of the draw that keeps kids staying back,” said Fred Bandel, a Florida Panthers scout who also worked for Montreal and Toronto during the past two decades. “But it’s still a battle or at least a discussion point, depending on the management’s philosophy.”

Yet Mittelstadt’s trajectory is unchanged. NHL Central Scouting rated him fifth among North American skaters in January’s midterm ranking. A big reason is the way he excelled against better competition.

He scored twice to earn player of the game honors in the CCM/USA Hockey All-American Prospects Game last September in Philadelphia. Mittelstadt was one of two active high school players on a roster of 42 American-born high school seniors and some college freshmen.

Mittelstadt, 6-1 and about 200 pounds, started last fall in the U.S. Hockey League with Green Bay. When he left after 16 games to rejoin Eden Prairie, he did so as the USHL’s leading scorer with eight goals and 13 assists.

“He’s as good of a playmaker as I’ve seen,” said Greenway legend Mike Antonovich, a Columbus scout with more than 30 years of experience gauging prospects.

“He had enough backbone to say, ‘I’m going to be a high school player this year,’ ” said former Gopher Scott Bell, a Pittsburgh scout. “He’s not a sheep; he’s a lion and that’s a real positive.”

Universal praise might give some players the idea they can coast. Not Mittelstadt.

Getting cut from the CCM High Performance Program as an eighth-grader and not getting chosen for a select team as a freshman rattled Mittelstadt. But he kept grinding. Skating stride. Stick handling. Shot. Adversity helped him sharpen all the skills that wow scouts these days.

A few months later, he was invited to join the Upper Midwest Elite League, impressed with his play and got that scholarship offer.

“For a few years there I was not where I wanted to be, but I used it as motivation then and I guess, in some ways, it still kind of fuels me now,” Mittelstadt said. “I have a fear of going back to being that guy again.”

Basketball, not hockey, was Tom Mittelstadt’s youth sport. But he understands perseverance and sought to impress its importance to his son.

Bad stretches, such as the Eagles’ 2-4-2 slump to finish December, failed to defeat Mittelstadt. Even as he drew extra attention on the ice, once again he kept working toward his goals.

“Coming back this year was going to be hard for him,” Smith said. “It’s not easy when, even with his talents, coaches have a scheme and the defense is going to do everything they can to stop you. He gets slashed and whacked. It’s frustrating, but he’s showed toughness by playing through it.”

“Any given night in a high school game I’ve got two or three guys on me,” he said. “It actually was kind of nice in the USHL to get out there and have only one guy on me.”

Happy to be home

Accelerating his classload last year in preparation for an early jump to college left Mittelstadt with just a handful of credits to earn this year. His father joked that his son lives “like a broke rock star” who can go to the rink early most days for extra ice time.

The back of Eden Prairie’s practice jerseys read “For Those I Love, I Will Sacrifice.” But Mittelstadt bristled at the notion that he personified the motto.

“I don’t see what I’m doing as a sacrifice for them,” he said. “I’m just happy to be here. I can’t really imagine being anywhere else.”

His core group of buddies includes seniors Noah Deraney, Tommy Hartle, Nicky Leivermann and Nolan Sullivan, “the group he wants to have a last hurrah with before hockey becomes a business,” Smith said.

Whether it’s Chipotle runs, pasta dinners or sitting in the locker room for hours after practice enjoying his teammates, Mittelstadt said, “I love the whole process.” In those circles, all of it melts away — draft status, expectations of the state’s hockey fandom, aggressive defenders, even kids hoping to score a stick.

“The main thing is focusing on the games and making sure you get it done,” Mittelstadt said. “I don’t think it’s all been a distraction or anything bad. For me, the main thing is, I don’t always like all the attention on me. I have teammates who make a difference.”