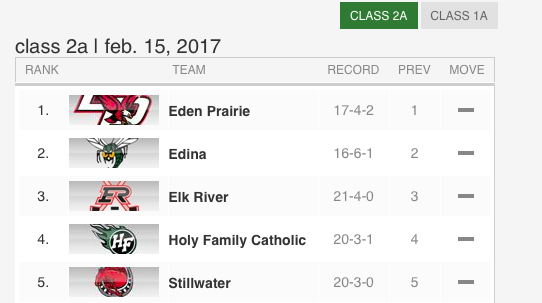 Eden Prairie (17-4-2) received 10 first place votes and remained ranked No. 1 in the Class 2A state coaches' poll after winning its last two games by a combined score of 24-2.

The rest of the Class 2A top eight remained the same as last week. No. 2 Edina bounced back from its Feb. 4 loss to Eden Prairie with a 5-3 win over No. 12 Minnetonka. Sophomore University of Minnesota recruit Ben Brinkman notched two goals and an assist.

No. 5 Stillwater (20-3-0) made a push to rejoin the Class 2A top three, but even the Ponies' wins over Forest Lake, Woodbury and Cretin-Derham Hall by a combined score of 26-5 were not enough to push past any of the higher-ranked teams.

No. 1 Hermantown (21-1-1) extended its unbeaten streak to 22 games and received 10 first place votes in the Class 1A coach's poll.

The Hawks' only loss, 5-1 to Class 2A Wayzata, came in their first game of the season. The following game they tied Class 2A-No. 20 Lakeville South and have beaten every opponent since by a combined score of 135-32.

Mahtomedi (12-11-1) jumped from seventh to fifth in the coaches' poll after beating former No. 5-ranked St. Cloud Cathedral, 3-1. Senior Luke Posner recorded two goals and an assist in the win. St. Cloud Cathedral (16-6-2) dropped to sixth following the loss.