The Lakers ended their regular season winning seven of their last eight games. 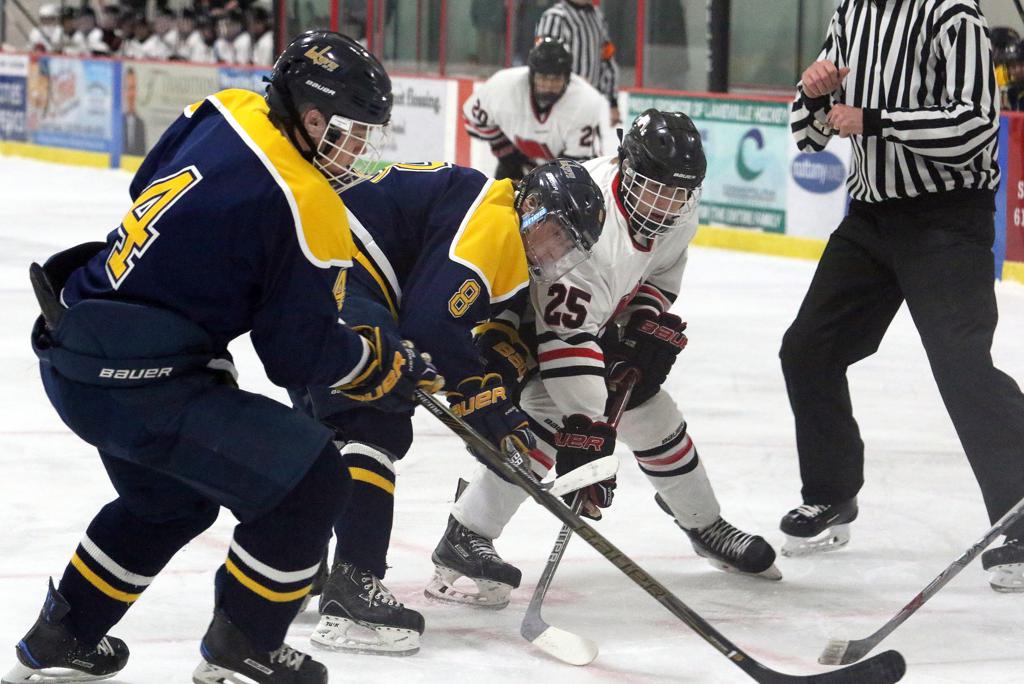 Prior Lake's Ryan Murray (4) and Carter Collins (8) battle for the puck against Lakeville North's Shane Griffin (25) in the first period of Prior Lake's 3-2 overtime win Saturday at Ames Arena. Photo by John Molene, SportsEngine 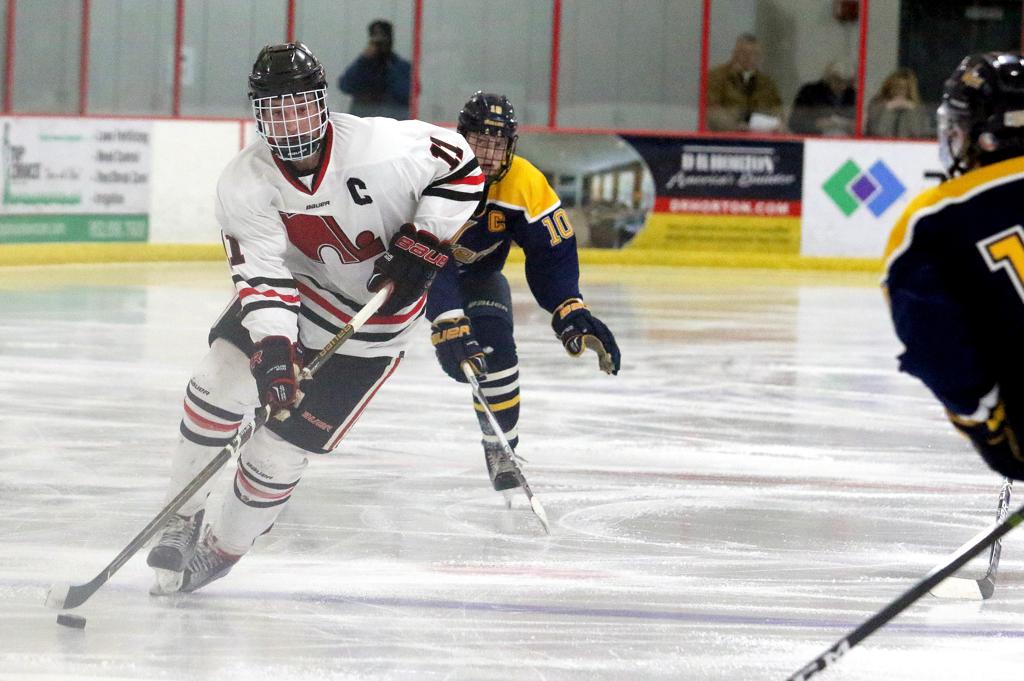 Lakeville North defender Keaton Pehrson (11) brings the puck down the ice for the Panthers during the first period. Photo by John Molene, SportsEngine


Prior Lake coach Joe Pankratz might have said it best, following his team’s 3-2 overtime victory on the road at Lakeville North Saturday afternoon.

Heavily outshot and outplayed for major stretches, Pankratz didn’t try to sugarcoat anything.

“Today we had no business winning this game,” he said. “We didn’t play very well at all. But our guys stuck to it and we kept putting pucks on net to see if we could make something happen.”

Eventually, something did indeed happen.

Trailing 2-1 in the final minutes, Prior Lake shelved the goaltender that kept kept them afloat for an extra attacker, and with 41 seconds remaining, the Lakers leveled the score with a goal from senior defenseman Jack Harris.

In the overtime session, speedy sophomore Jackson Jutting threw a shot on net from the high slot that beat Lakeville North, ranked No. 6 in Class 2A in the state coaches' poll, goaltender Buzz Eigner, setting off pandemonium for the Lakers, who escaped with a narrow victory. In the process, they captured first place in the South Suburban Conference from the clutches of the defending champs.

It capped off a fiery clash that drew eight penalties, and could have offered many more.

“These kids know each other, and it means more than the 25th game of the season usually does,” Pankratz said. “Obviously, it was for the conference championship.”

Prior Lake’s backstop, senior goaltender Danny Long, made 35 saves in helping preserve the victory, and kept the Lakers involved during stretches of heavy pressure.

It would be difficult to overstate Long’s footprint on this game.

“I just knew I had to play my kind of game and do what I can to help the team win,” Long said afterwards.

A similar script took shape today, the final game of the regular season, but with a different result for No. 16-2A Prior Lake (16-9-0, 14-3-0), who picked up their seventh win in their last eight games.

“We are just playing a good team game, and if we play like we did today, we will be fine,” Long said.

The victory closes another chapter of a increasingly heated rivalry as both teams head into the section tournament.

For the Lakers, who found some success late last season and took a step forward with a section win that pushed them on to Mariucci Arena for the first time in program history, the team seems to be peaking at the right time.

“We’re playing some pretty good hockey right now,” Pankratz said. “The first half of the season was tough, we had a couple things we had to get through, but the team right now is playing very well. We’ve got quite a few guys that this is their first year playing varsity, so it took awhile to get some things together.”

Prior Lake sophomore Jackson Jutting’s shot from the high slot found the back of the net midway through the overtime session to help lift the Lakers (16-9, 14-3) to a 3-2 victory over Lakeville North Saturday afternoon at Lakeville's Ames Arena.

Prior Lake, ranked No. 16 in Class 2A in the state coaches' poll, was outshot 37-14 for the game, but walked away with the victory, and the South Suburban Conference title after knocking off No. 6-2A Lakeville North (18-5-2, 13-3-1) in another chapter of a increasingly heated rivalry.

Trailing 2-1 in the final minutes, the Lakers pulled their goalie and leveled the game at 2-2 with 41 seconds remaining when Jack Harris scored for Prior Lake. In the overtime period, Jutting’s goal proved the difference as the Lakers earn a season split with the Panthers.

Lakeville North goalie Buzz Eigner stopped 11 shots in goal for Lakeville North. His counterpart, Danny Long, made 35 saves in net for the Lakers. 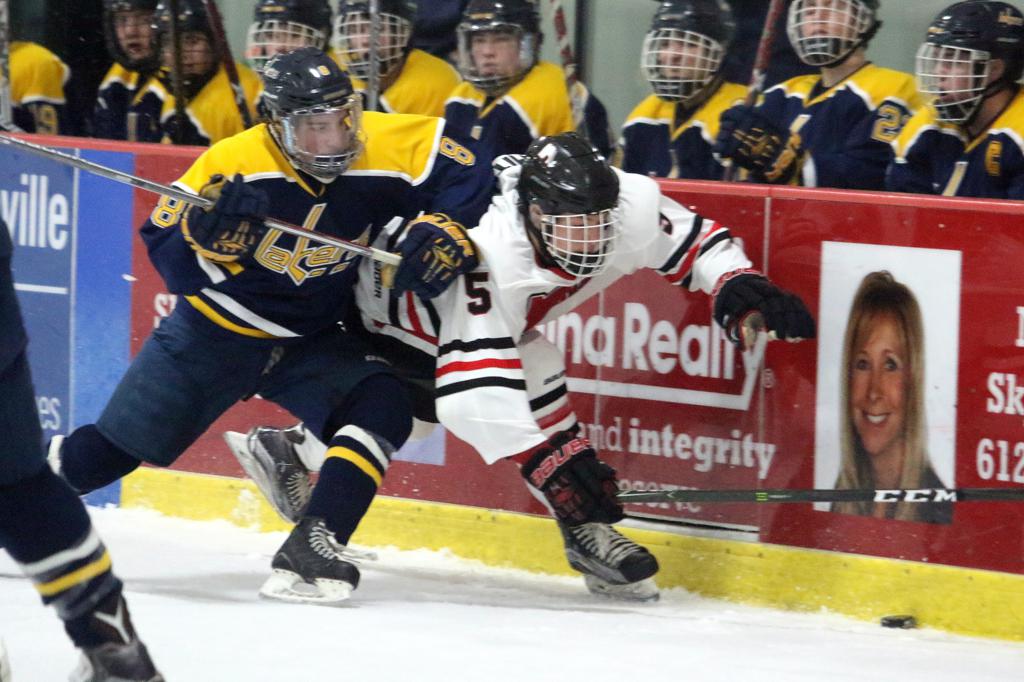 Prior Lake forward Carter Collins battles Lakeville North's Reed Smith (5) in front of the Prior Lake bench in the second period. Photo by John Molene, SportsEngine