Greenway bests Hibbing/Chisholm 2-1 in the Class 1A, Section 7 semifinal

The Raiders held off the Bluejackets to advance to the section championship game. 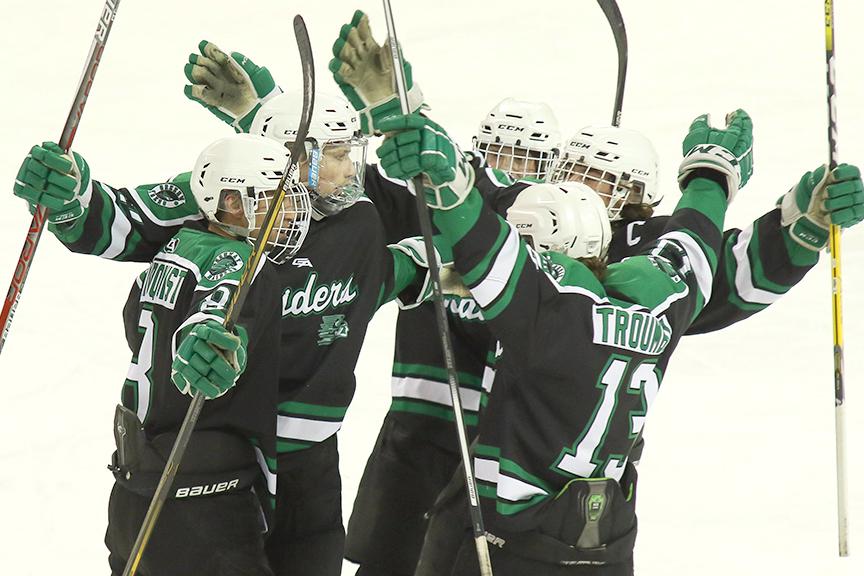 Greenway/Nashwauk-Keewatin players celebrate a goal by teammate Michael Chupurdia (top, left) during Saturday's 2-1 win over Hibbing-Chisholm in the Class 1A, Section 7 semifinal at Amsoil Arena. Photo by Dave Harwigviewthroughmylens.net@gmail.com

The last time Greenway played in a section championship game, Grant Troumbly and Taylor Lantz were toddlers. That was in 2001, when Gino Guyer and Andy Sertich teamed up to lead Greenway to a third place finish in the Class 2A state tournament. This time, the Raiders’ new top line pairing has them playing for the championship once again. After a 2-1 win over Iron Range rival Hibbing/Chisholm, they're back in a section final.

Troumbly and Lantz combined for the game-winning goal four and a half minutes into the third period, as Troumbly found Lantz, who deked his way through the offensive zone. Lantz dished the puck back to Troumbly, who finished off the game-winner.

“Taylor gets the credit,” Troumbly said, deflecting his role in the goal to emphasize their chemistry. “He’s easy to work with, and he’s shifty. When I give him the puck, he usually finds a way to get it back to me.”

It has been a long, trying road for Greenway. The Raiders dropped back to Class 1A for the 2005-2006 season, and the program’s numbers diminished severely in the late 00s. Lately, however, the Raiders have surged back into contention, and made their first section semifinal as a Class 1A team a year ago. This year, they took the next step.

This season alone has had its up and downs. Greenway hadn’t beaten Hibbing/Chisholm in 13 years before a win in December, and an injury to Troumbly left them without one of their leading scorers for half the season. Off-ice scares and tragedies also weighed on the Raiders, as a player suffered an injury in a car accident and a classmate passed away this winter. But the Greenway team rallied together, and now will play on Section 7A’s final stage.

The Raiders faced trying times again in the third period. After two fairly even opening stanzas, the Bluejackets pushed forward in the third period, unleashing sixteen shots on Greenway goaltender Austin Anick, who saved them all. With seven minutes remaining, Anick’s pad slipped precariously close to the goal line as he covered a puck, but it was never quite squirted across.

The Raiders’ reward for beating Hibbing/Chisholm is a daunting one: they must face powerhouse Hermantown in the Class 1, Section 7 final. The Hawks are defending state champions, have made seven straight State Tournaments, and pounded Greenway 11-2 in their regular season meeting.

“They’re getting tired of hearing it, but 37 years ago, everyone bet on the Russians,” said Clafton of his team. “We’re trying to fight that mindset. That’s the plague that’s spread. Anything is possible.”

Not that the Raiders will rely on miracles alone. Clafton rattled off a laundry list of areas where they’ll have to up their game on Wednesday, including avoiding undisciplined penalties, getting more pucks to the net, and getting traffic in front of Cade McEwen. He lauded Hermantown coach Bruce Plante for the work he has done in building his program into a perennial power.

Still, Clafton will do his best to channel his inner Herb Brooks over the next week. “He keeps saying, ‘this is our time now,’” said Troumbly with a grin. 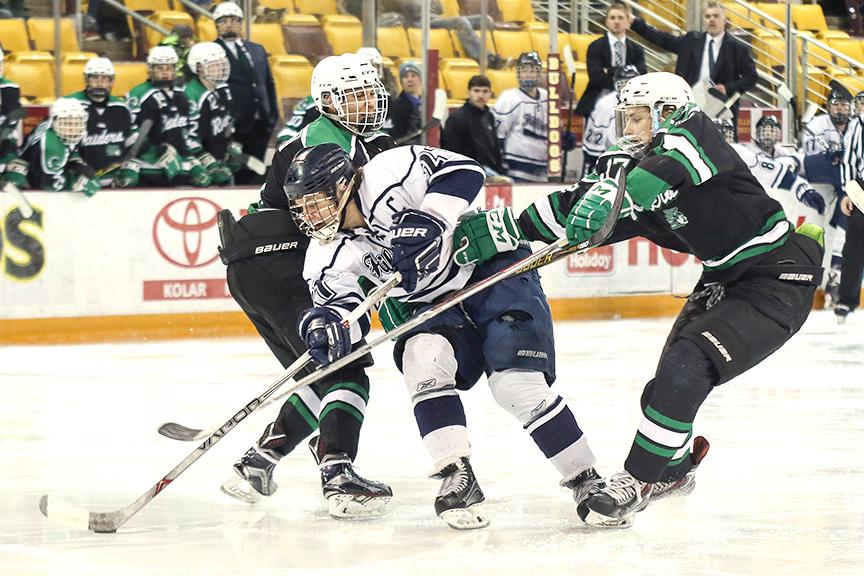 In a hard-fought clash between two age-old Iron Range rivals, Greenway outlasted Hibbing/Chisholm 2-1 on Saturday to advance to the Class 1A, Section 7 championship on Wednesday night.

The Raiders struck first on a power play bomb from the point by Michael Chupurdia, which held up as the lone tally in a fairly even first period.

Greenway had several near chances in the second period to build a two-goal lead, but Bluejackets goalie Christian Renskers made a huge save on Grant Troumbly midway through the period. Hibbing/Chisholm built some momentum from that save, culminating in a goal from defenseman Michael Kubena, who popped in a pass directly in front of the net to tie the game at one.

The Raiders, however, simply went back to work. Troumbly finished off a give-and-go passing sequence with linemate Taylor Lantz at 4:28 of the 3rd period to give Greenway a lead it wouldn’t relinquish.

The Bluejackets unleashed 16 shots on goal in the third period and moved leading scorer Jarrett Lee, who had started the game on defense, back to his normal forward position. It was all to no avail, however, as Greenway goalie Austin Anick stopped all 16 shots and 35 of 36 on the game to earn the win.

The third-seeded Raiders (19-7-1) advance to take on top seed Hermantown in the section title game on Wednesday night. Second-seeded Hibbing ends its season 18-9.