Edina sweeps aside St. Louis Park in the Class 2A, Section 6 semifinals 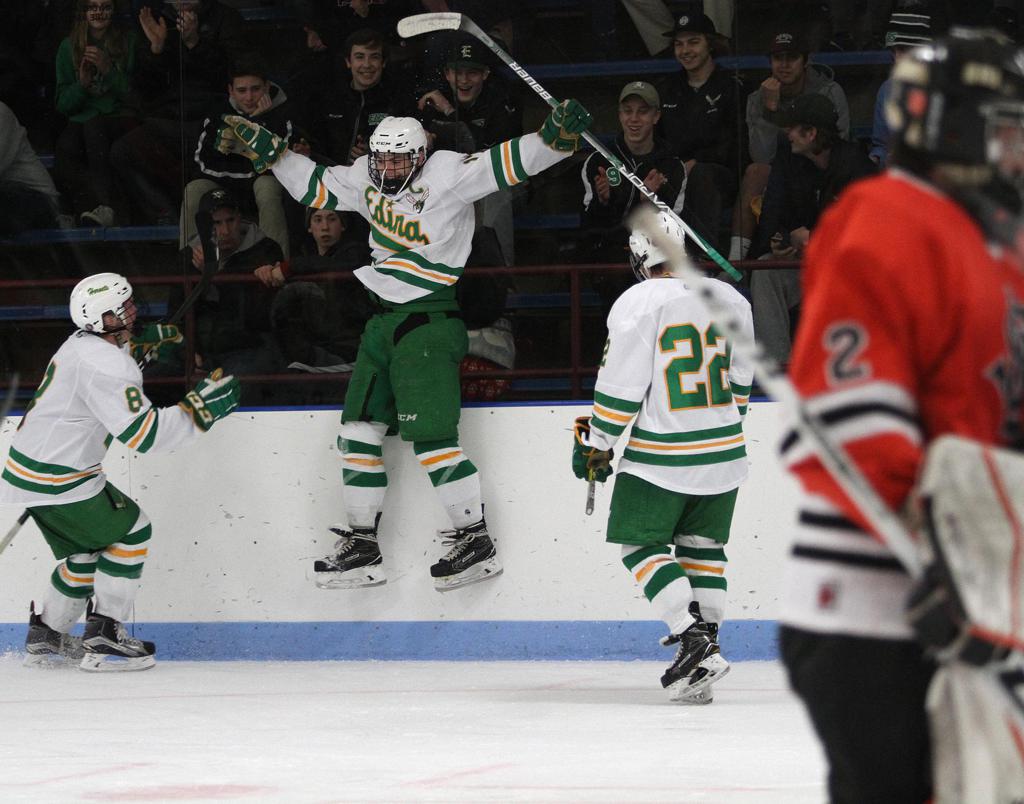 Ben Brinkman is the sort of dude you’d hate to meet in a dark alley.

He’s big, he’s strong and he has a bit of mean streak.

Well-lit hockey arenas aren’t a good place to run into Brinkman, Edina’s ultra-talented sophomore defenseman, either. Bauer Neudecker can attest. The St. Louis Park senior, a Mr. Hockey finalist who amassed 40 goals and 34 assists this season, might as well have been playing in a broom closet for all the room Brinkman gave him to roam.

“You just have to take the body and not give him any space,” Brinkman said on Saturday after holding Neudecker scoreless while leading the Hornets to a 7-1 Class 2A, Section 6 semifinal win over the Orioles at the Bloomington Ice Garden. “If you give him room, he can do a lot of good things for his team.”

There were several one-on-one confrontations Saturday between the ultra-quick Neudecker, who stands about 5-foot-6, and the hulking Brinkman, who stretches over 6-feet and carries about a 40-pound advantage. Turns out Brinkman, who has committed to play at Minnesota, is pretty fast, too. He rarely let Neudecker scoot beyond his considerable reach.

And while Brinkman was scoring twice on power plays, Neudecker was being held off the scoresheet for just the third time in 27 games this season. One of Neudecker’s other two scoreless games came early in the season in a 5-2 loss to Brinkman and Edina.

Brinkman is one of Edina’s captains. Sophomores don’t often make Edina’s roster, much less wear the C. Edina coach Curt Giles couldn’t remember the last time, if ever, he had a sophomore captain. But then, it’s not often he has a player like Brinkman.

“He’s physically mature, obviously, but he’s mentally mature, too,” Giles said. “He looks at things differently than most sophomores. It’s really funny, because sometimes he’s still a kid, and you forget that.”

As a sophomore, Brinkman said he doesn’t feel like it’s his place to do a lot of leading through talking.

“It was nice to be named a captain,” Brinkman said. “But we have a ton of captain-material type people on this team.

“I just try to work hard every day and lead by example.”

Following Neudecker’s lead, the Orioles (18-8-1) went from Class 1A doormat to Class 2A giant slayer (St. Louis Park upended Benilde-St. Margaret’s in the section quarterfinals). While Saturday’s matchup with Edina (20-6-1), ranked No. 2 in Class 2A in the latest state coaches’ poll, didn’t go as planned, the game only adds to the foundation Neudecker helped pour.

“It was unbelievable to see how many fans we had supporting us,” Neudecker said. “It was incredible. I’ll never forget it.

“I can’t wait to see this team in the next couple of years and how much it improves even more.” 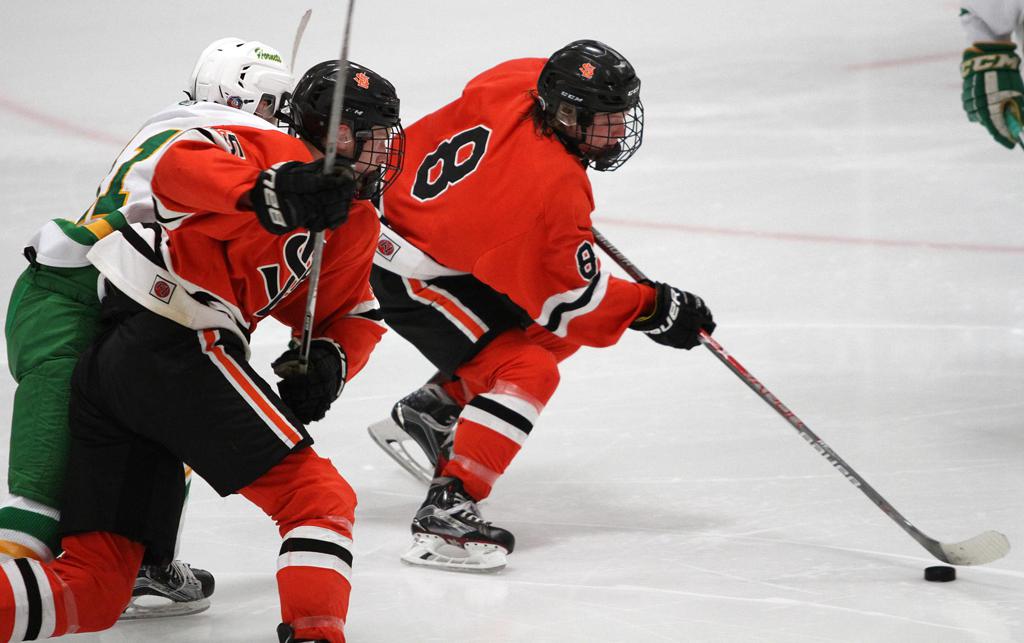 Edina (20-6-1) advances to play Wayzata (9-17-1) in the section final at 8 p.m. on Wednesday at Mariucci Arena in Minneapolis. Edina has defeated Lake Conference rival Wayzata three times this season.

Brinkman, who has committed to play at Minnesota, scored early in the second period to put the Hornets ahead 3-0. He added another power-play goal midway through the second as Edina stretched its lead to 5-0.

Lewis Crosby also scored twice and added an assist for the Hornets, ranked No. 2 in Class 2A in the latest state coaches’ poll. Jett Jungels had a goal and two assists for Edna.

St. Louis Park (18-8-1), making a rare appearance in a Class 2A section semifinal, completed one of the best season’s in the programs history. Neudecker, one of 10 Mr. Hockey finalists, finished the season with 40 goals and 34 assists. 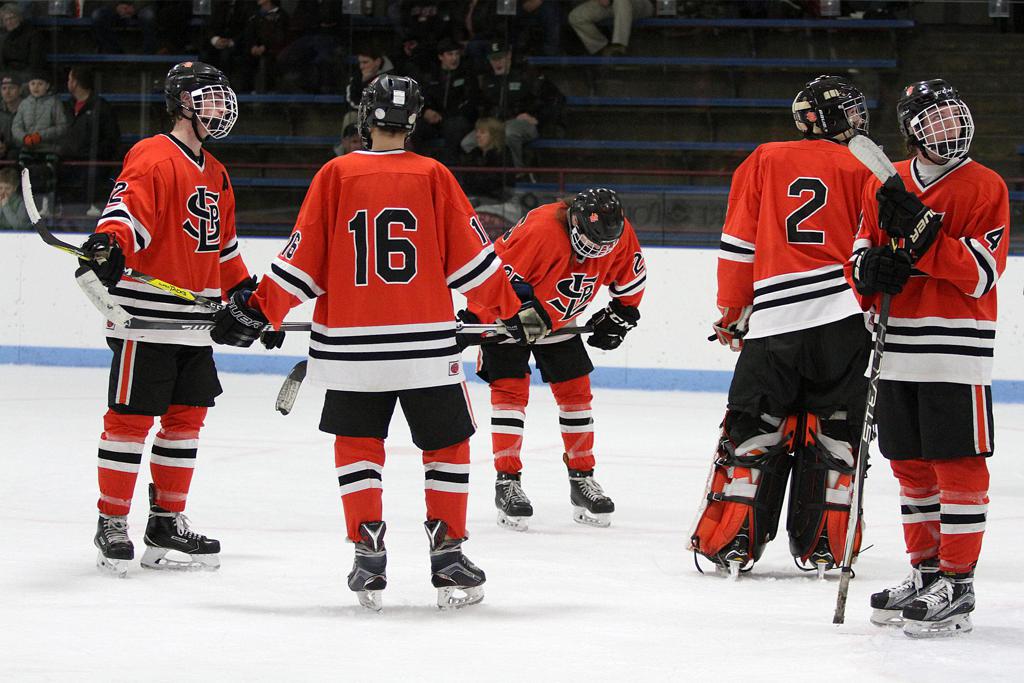 St. Louis Park watches the continuous game clock run down after Edina opened up a six-goal lead late. The Orioles end their season with a 18-8-1 record. Photo by Drew Herron, SportsEngine 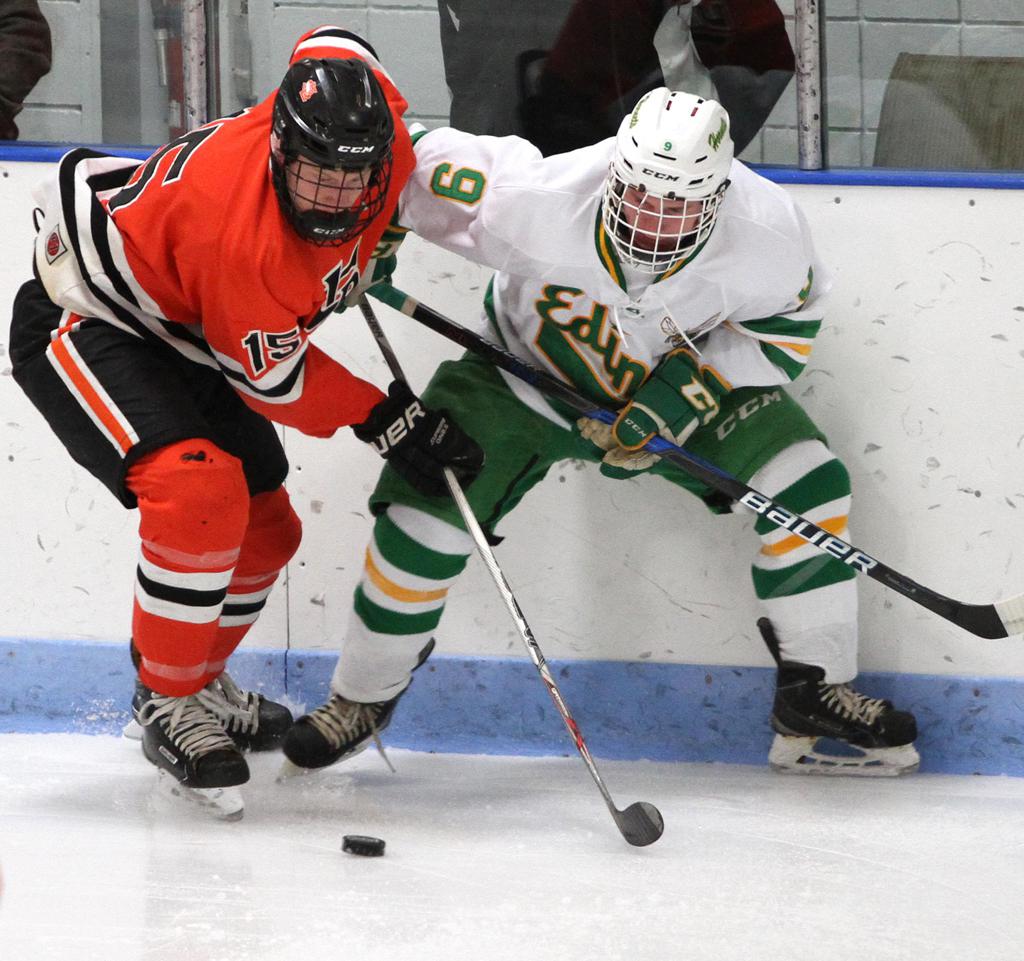