Hermantown takes down Greenway to reach the Class 1A state tournament

Jesse Jacques recorded four points to lead the Hawks past the Raiders. 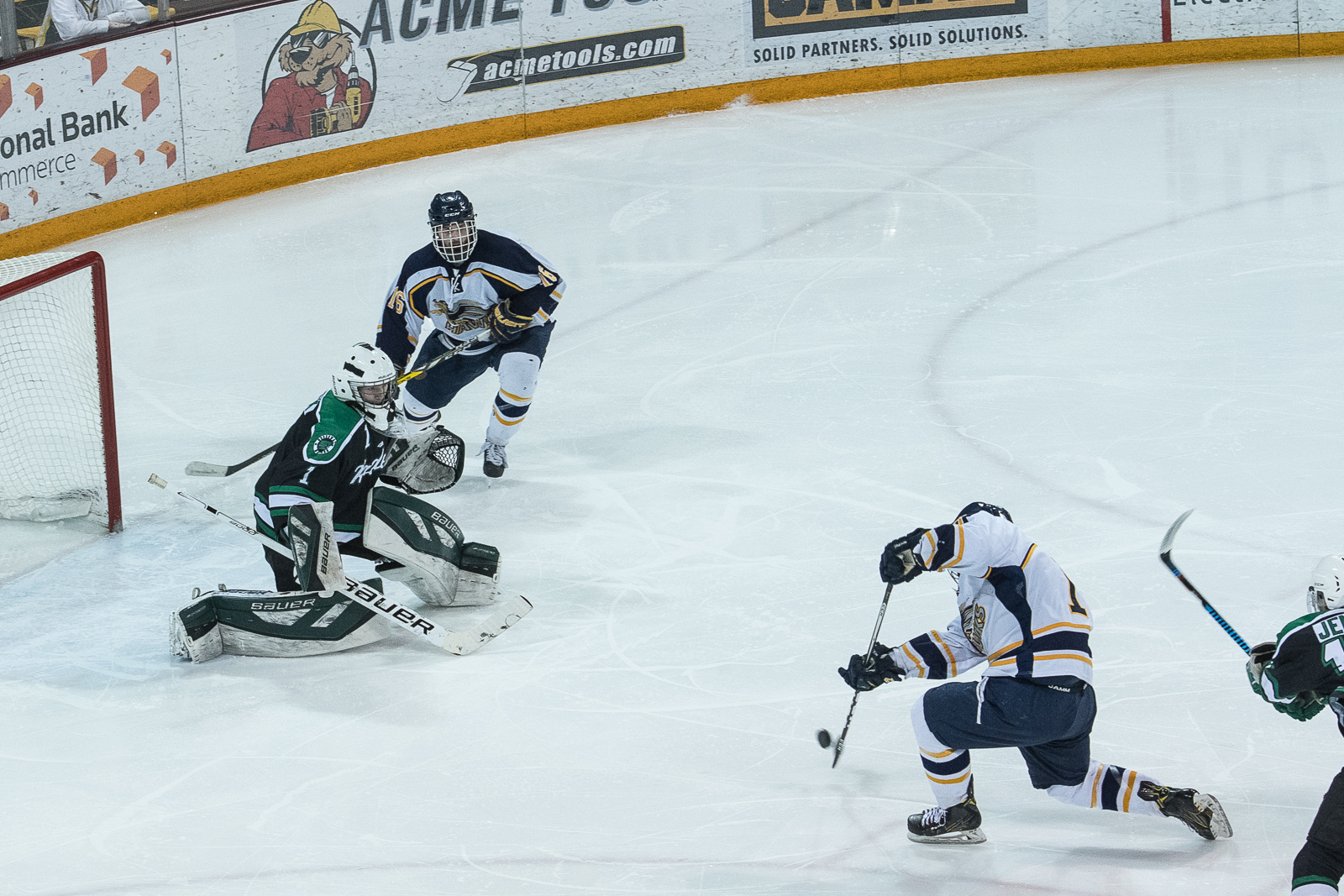 Hermantown's Tyler Watkins (18) scores to put Hermantown up 4-0 to start the third period of the Class 1A, Section 7 championship on Wednesday night. Photo by Matthew Moses, SportsEngine

Hermantown has become the powerhouse to beat in Class 1A hockey in recent years, and the Hawks were ranked No. 1 for most of the season. With a team that boasted two Mr. Hockey finalists and a finalist for the Frank Brimsek award for the state’s top goalie, the Hawks were overflowing with talent, but with that came constant pressure to perform.

“It’s been that way the past three years,” said senior Jesse Jacques of the target on their backs. “We get that every year. We get everyone’s best game, and we like that.”

Hermantown certainly drew out the best in Greenway in the the Class 1A, Section 7 final. The Raiders knew they faced a herculean task in trying to stop the Hawks, and would need an ideal game plan. For the better part of the first period, they stuck to that plan, and held their own.

“They executed the game plan as good as they could do it,” said Greenway coach Grant Clafton.  “Ninety-nine point nine percent.”

The Raiders kept a forward high and played strong defense for long stretches of the game, while also generating just enough chances in transition to send a few murmurs through the crowd at Amsoil Arena. But it still wasn’t quite enough to topple Hermantown.

“They just came in waves,” Clafton said of the Hawks. “They make plays all up and down the ice, and there’s always someone there.”

Key to Hermantown’s success were late goals in the first and second periods. Ryan Sandelin’s first period tally got the Hawks on the board after a long run of quality play from Greenway. Jacques’s goal late in the second, meanwhile, gave Hermantown a seemingly insurmountable 3-0 lead.

Jacques took matters into his own hands on that effort, winning a draw and firing the puck straight through the Greenway center and past unsuspecting goaltender Austin Anick, whose 39 saves gave Greenway a fighting chance.

“Jesse is a big game section final player,” said Hermantown coach Bruce Plante, noting that Jacques scored a hat trick in the final a year ago. “He and Ryan [Sandelin] really lead us.”

Even as those two seniors scored the Hawks’ first three goals, their depth and balance showed all night. Plante lauded the strength of the Hermantown defensemen in holding the blue line, and on the occasions when he was tested, Cade McEwen made important saves in goal to keep his team in control. Whenever opponents have strong shifts that might swing the momentum, the Hawks always seem to have an immediate response.

As the pressure has mounted, the Hawks have also found ways to maintain levity. The team continues to pass around a pink bike helmet to each game’s most valuable player, and the team will stick with its yellow school bus on the road to St. Paul this coming week. The Hawks build continuity and tradition, and Plante, the constant throughout, always keeps the mood light. The formula worked for an eighth straight season, as the Hawks added yet another chapter to their long run of dominance over the Class 1A in northeastern Minnesota.

On another front, things stay the same for Hermantown: this feeling never gets old.

“This is what you play the game for,” said Plante. “Every group is different, and now we have some new sophomores and some juniors who played JV last year who get their first kick at the can. They bring the excitement.”

Jacques, now headed for his third state tournament, concurred with his coach. “The experience is the same, but with these guys, it’s a new group, and it’s a blast with everyone.” 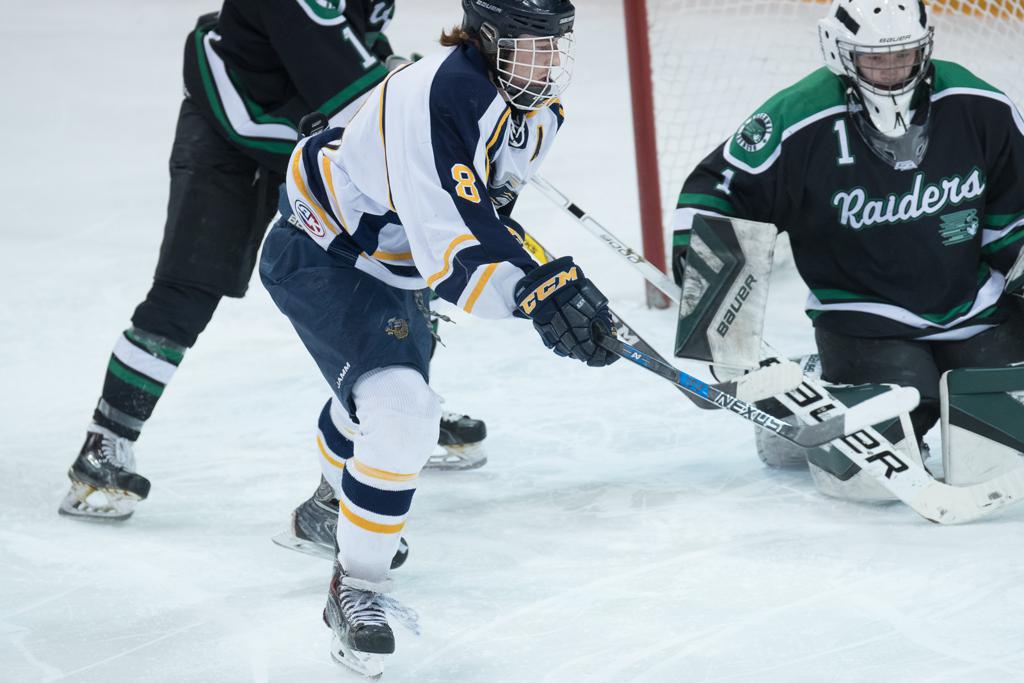 Jesse Jacques (8) of Hermantown eyes the rebound the put the Hawk up 2-0 in the second period. Photo by Matthew Moses, SportsEngine 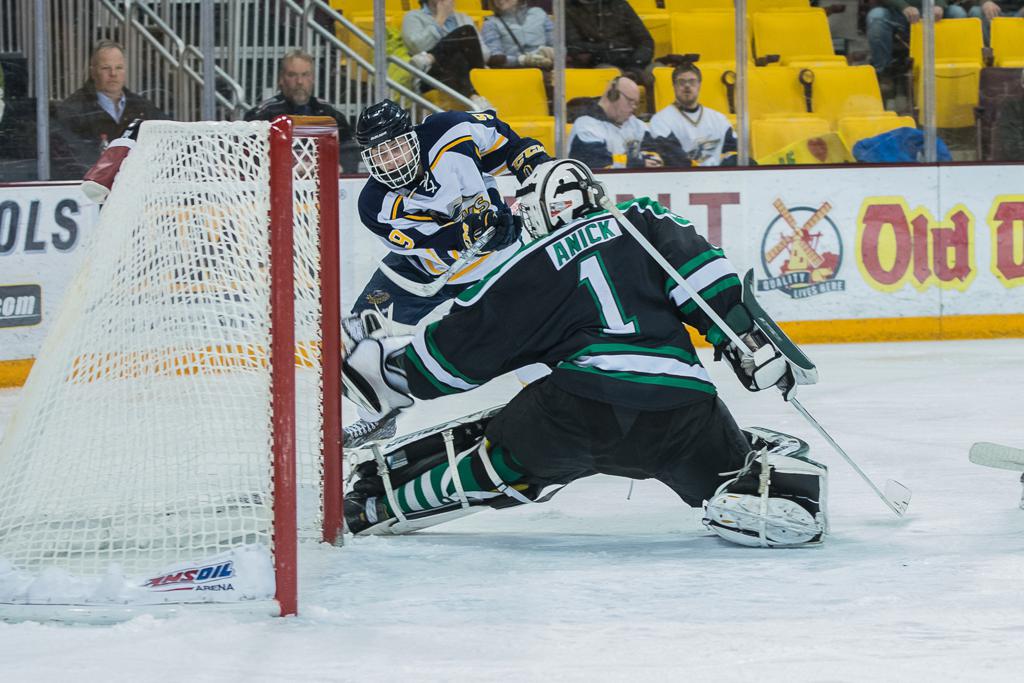 Greenway's Austin Anick faced a total of 44 shots, while getting the save on this shot by Hermantown's Brady Baker. Photo by Matthew Moses, SportsEngine

Greenway came into Wednesday’s Class 1A, Section 7 final hoping for a miracle, but in the end, the favorite marched on. Hermantown defeated Greenway 5-1, a convincing performance that left no doubt that the Hawks are ready to defend their state championship.

Despite the final score, the game wasn’t without a little intrigue. After an early barrage from Hermantown, the Raiders settled in applied strong pressure in the middle stages of the first period. As so often happens, though, the tables turned in the blink of an eye, as Ryan Sandelin finished off a feed from Jesse Jacques to take a 1-0 lead at 15:12 of the first.

A goal from Jesse Jacques at 1:51 of the second period doubled Hermantown's lead, and while Nikolai Rajala deflected in a shot to put Greenway on the board at 6:17 of the third, a pair of Tyler Watkins goals in the third period gave the Hawks a comfortable final cusion.

Austin Anick made 39 saves in a losing effort for the Raiders, while Hermantown goaltender Cade McEwen stopped 15 shots in the win. The Hawks (26-1-1) advance to the state tournament next Wednesday, while Greenway ends its season 19-8-1.