Riley Bowman notched two goals and Matt Dahlseide had a goal and two assists to lead the Spartans over the Eagles. 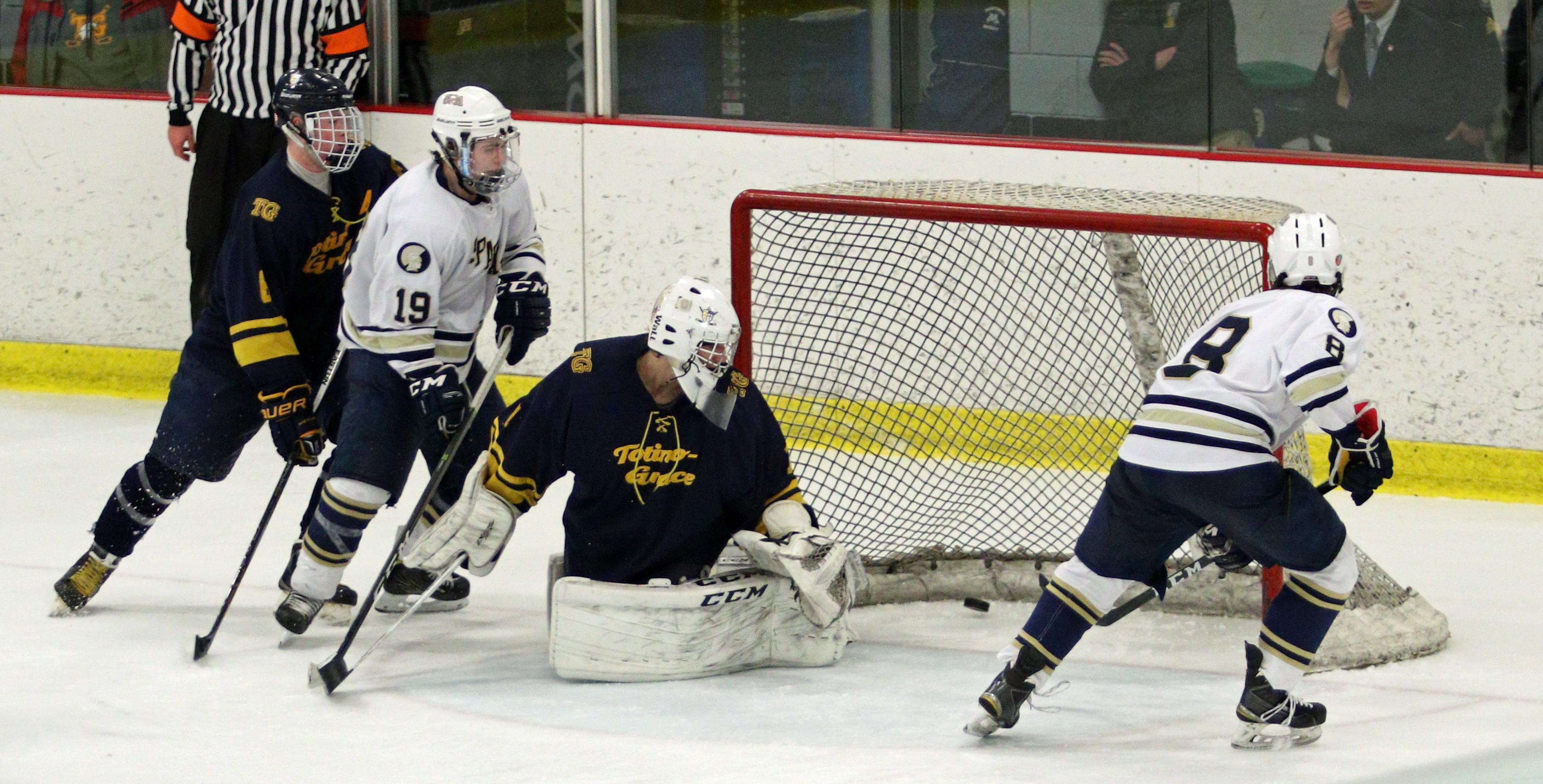 Will Kelly (8) scored twice in the third period for St. Paul Academy to pull past Totino-Grace in a 5-3 victory. The Spartans will play on Friday night in the Section 4A championship game. Photo by Cheryl Myers, SportsEngine

“He still plays a key role with us--even through his break--and today he was on the bench as another coach for us,” St. Paul Academy coach Matt Funk said. “Today he told us when (Sam Hentges) was on the ice for them so we had our right matchup out there.”

Having an extra eye on Totino-Grace’s senior captain helped hold him to a one goal night, and as a unit, the Spartans simply created more chances on their 37 shots than the Eagles did.

After securing a 4-1 lead halfway through the third period following Will Kelly’s first goal of the game, Totino-Grace rallied back by netting two unanswered goals.

A Spartans timeout proved to calm things down and Kelly scored minutes later to put the game out of reach.

“We called the timeout just to get our guys heads back in the defensive zone,” Funk said. “Up 4-1, I think we relaxed too much.”

Tied 0-0 in the first period, the Spartans had three power-play chances but failed to capitalize on any. They came close near the 10-minute mark when Hentges made a move at the top of the circle and fired a shot far left that hit pipe but bounced out.

St. Paul Academy scored the lone goal of the period on rush by Matt Dahlseide. Skating down the left end of the rink, Dahlseide beat his defender along the boards and sent a cross crease pass that found Riley Bowman in front of the net for the easy tap in.

In the second period Bowman nearly scored his second goal, but his shot hit pipe and Spartans forward Cam Fagerlee sent a pass the length of the ice that connected with Dylan Dubuque, who was alone at the opposite blue line.

One-on-one with junior Spartan goalie Andrew Beran, who stopped 25 of 28 shots, Dubuque put a move on Beran and beat him for the equalizing 2-2 goal.

A pile up of Eagles skaters formed in celebration of the momentum-swinging score and a potential upset started brewing.

But St. Paul Academy let Totino-Grace enjoy its score all of 17 seconds before Bowman got his second chance at his second goal and this time he buried on the following rush.

Four goals were scored in the third, but the Eagles could not find enough offense to match St. Paul Academy’s quick strikes.

In the Eagles net, Michael Bonfe turned away 32 of 37 shots.

“We had our chances to tie it, and they are a nice team with some talent,” Totino-Grace coach Mark Loahr said. “They earned this one.”

The Spartans advances to Class 1A, Section 4 final and will take on the winner of St. Paul Johnson and Mahtomedi. 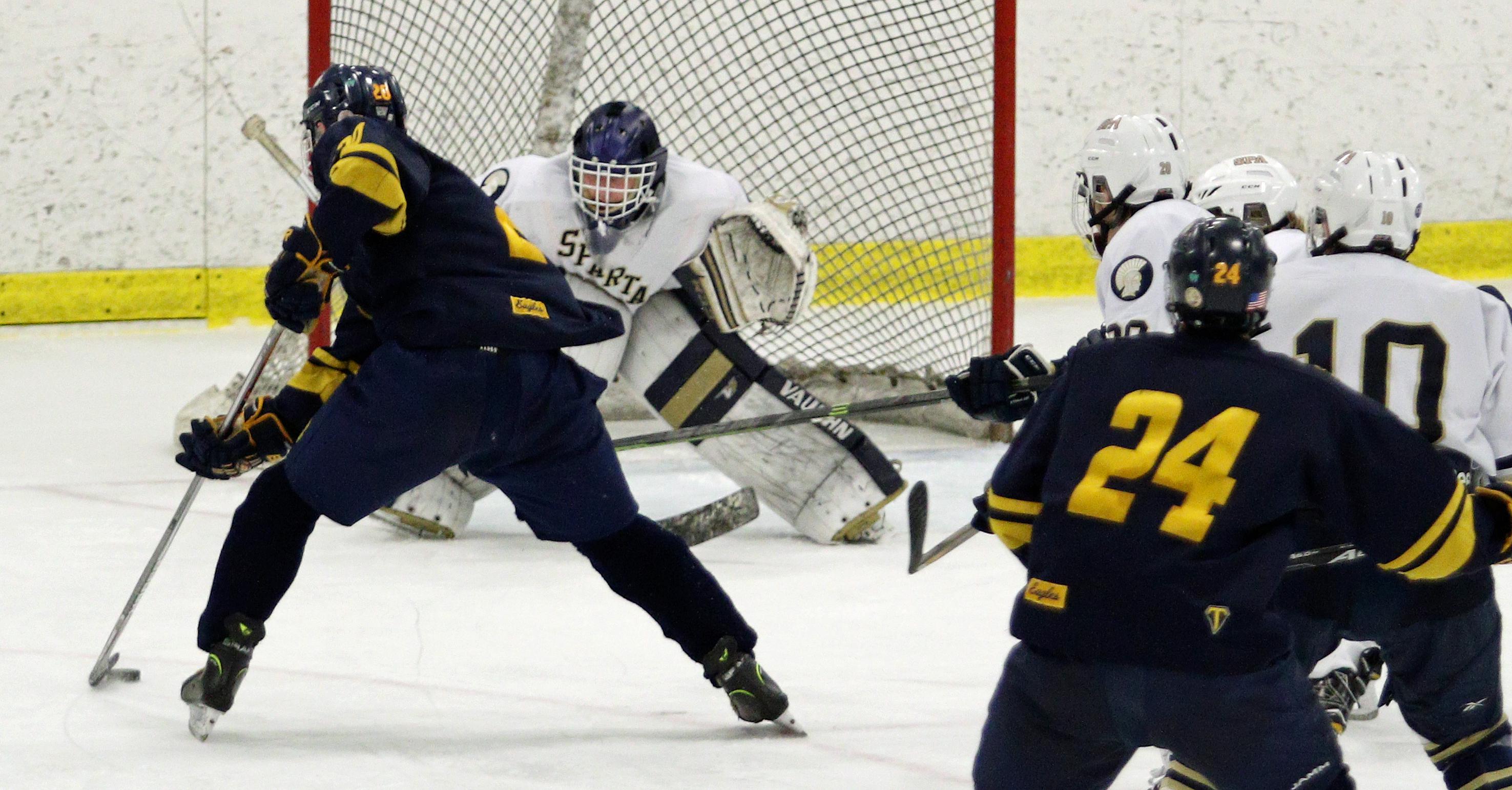 Sam Hentges (20) scores an unassisted goal for Totino-Grace midway through the third period turning the momentum in the Eagles' favor. Photo by Cheryl Myers, SportsEngine

St. Paul Academy (23-4) defeated Totino-Grace 5-3 behind Riley Bowman and Will Kelly, who each netted two goals during the Class 1A, Section 4 semifinal inside Roseville Ice Arena.

Matt Dahlseide assisted on both of Bowman’s goals. The connection between the two forwards proved too much for Eagles goalie Michael Bonfe who stopped 32 of 37 shots.

Dahlseide added a goal in the third period and Kelly’s first goal followed, but Totino-Grace (11-14-2) scored back-to-back times, cutting the lead to one.

But Kelly, with under four minutes remaining, netted the Spartans’ fifth goal and St. Paul Academy, ranked No. 4 in Class 1A in the state coaches' poll, was able to hold off Toino-Grace’s late rally.

St. Paul Academy advances to Class 1A, Section 4 final and will take on the winner of St. Paul Johnson and Mahtomedi.