After losing twice to Breck last year, Bears dominate round one of 2011 rivalry 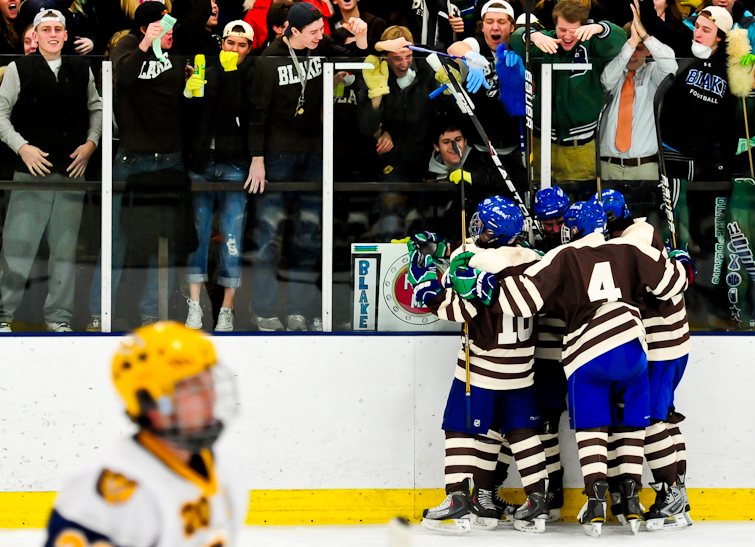 Blake celebrates a first period goal during the Bears' 4-2 victory over Breck on Thursday, Jan. 27. Photo by Adam Crane

When Breck and Blake meet on the ice, things heat up.

It’s safe to say the rivalry between the two teams is not going away any time soon after a hard-fought battle on Thursday, Jan. 27, won by Blake 4-2. 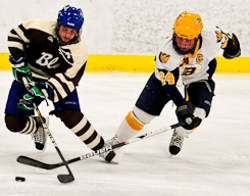 “This is a big rivalry for us every year,” Blake forward George Ordway said. “To be honest they’ve gotten the best of us the last couple years so it was time for a little payback.”

The Bears got their revenge after being beaten by Breck in two games last season, losing by a combined score of 12-2.

Blake goaltender Ryan Hayes was in goal for both of the losses in 2010 but made 24 saves in the winning effort.

“All those games (last season) I think about what I can control,” Hayes said. “No matter what’s on paper, I know that we’ll give them a fight.

As the first period of the Jan. 27 began, The Blake School Ice Arena quickly filled to capacity and fans lined the boards to grab a glimpse of the rivalry game.

“Talking back and forth between these kids, it’s a really deep rivalry,” Hayes said. “Some of the kids on my team have been going to these games since preschool. (As a Blake player) once you hear the word ‘Breck’ when you’re born, there’s just hate on the other side. But you step on that ice and it’s just a game.

“There’s some trash talk like any rivalry that happens. Off the ice, they’re great people and it’s a great school but I’m glad Blake got the win.”

The rivalry was even felt by Bears’ coach John Hamre.

“Within the schools, it’s a special rivalry among the kids,” Hamre said. “That’s what the high school years in a student athlete’s life is about – building those memories with their friends. A lot of the kids have played against kids on the opposing team in spring, summer and fall hockey and in other sports.

“So there’s a history and a school rivalry built up and that adds a little extra zest and fun to the matchup. We’re fortunate to come out on top this game and we know the next game is going to be another hard-fought battle.

“That’s what makes it fun. That’s the great thing about high school hockey.”

As good as it gets 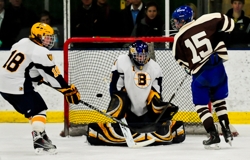 A third period power-play goal by Ryan Bullock (not pictured) gets past Breck goaltender Max McCormick and finds the back of the net during the Thursday, Jan. 27, game. Photo by Adam Crane

Blake was playing for more than just a mark in the win column going into their latest matchup against long-time rival Breck.

They were playing for pride.

“Hockey has a long memory and the kids have long memories,” Blake coach John Hamre said. “Every game against good teams you want to prove yourself and we have the upmost respect for their team and program. It was a strong team on our schedule and we wanted to get out there and play Blake hockey. In our locker room that means something.”

This time, Blake skated away victorious as they defeated Breck 4-2 on Thursday, Jan. 27, at The Blake School Ice Arena.

“It’s two good teams and a lot of speed going back and forth,” Hamre said. “It’s obvious the kids sense the school rivalry and so it’s what high school hockey should be. It’s real spirited play at both ends of the rink and lots of kids having a lot of fun really competing hard.”

It also helps having upperclassmen leadership excited to play.

Blake senior forward George Ordway and senior goaltender Ryan Hayes stood out for the Bears in the team effort.

Hayes, however, admits he was shaky at first.

“In warm-ups I was seeing the puck ok,” Hayes said. “In the locker room before the game I focused and told myself I could do this.

“I believed in my team.”

Hayes’ team never lost the lead throughout the game making it easy for him to settle in and get comfortable.

“Every goalie has that game where it just clicks and it did tonight,” Hayes said. “It feels really good to beat Breck.”

Things also clicked for Ordway who registered three points (one goal, two assists) in the matchup.

“I was feeling it tonight,” Ordway said. “My hands felt good and I was fired up to play, for sure. My teammates made some nice passes and I got the puck, tried taking advantage of it and do the best I could. This game has been on our schedule and we’ve been looking forward to it for a while.”

A scary moment for Blake came in the second period when Ordway was checked hard into the boards by Breck’s Wesley Iverson. Ordway lay on the ice for several seconds before skating off the ice on his own strength. Iverson receives a two-minute boarding penalty.

“It was alright,” Ordway laughed. “I was alright. I didn’t really see it coming but no worries. I think we scored on that power play so it felt good.”

Blake scored on not only that power play but the other two extra-man advantages in the game.

“Certainly in the game played tonight, in a 4-2 game, three power-play goals means a lot,” Hamre said. “We emphasize in practice quick puck movement and working on things as a unit. Good things happen on special teams if you can move the puck quickly. We have some simple ideas and concepts that the kids try to work together on and we got some good bounces tonight. We know it’s going to be a battle and one heck of a tough game the last game of the regular season at their rink.”

For now, the Bears will enjoy their victory.

“We know they’re a good team,” Ordway said. “It’s always a fun rivalry. We kind of felt like this might be our year. We’ve been preparing for this game for a while and we were excited to start. It was a great team effort and we were excited from the beginning.

“That’s when good stuff happens – when everyone is working hard together.”

Although Blake earned a big win during an even bigger rivalry game, the Bears know not to dwell.

“Enjoy the moment now but know that we have to keep improving,” Blake coach John Hamre said. “We gotta keep getting better because it’s a long ways until the end of the season and we still have goals ahead to work for. Every day we work to get a little bit better.”

“It’s just one step in the road,” Blake goaltender Ryan Hayes said. ‘It’s great to get the win but even though it’s late in the season, it’s still really early in our progression. We haven’t won anything yet. We’re still building on this. It’s a great feeling but we’re coming back tomorrow with a ‘not too high, not too low’ mentality looking to finish the season and make it through sections.” 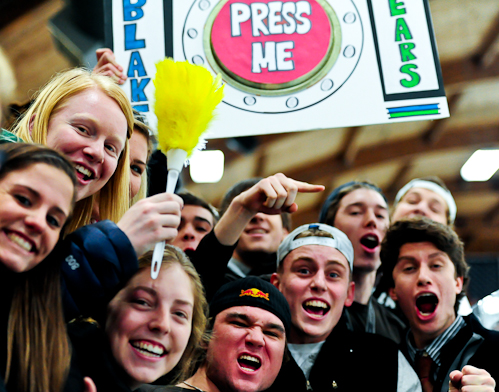 The Blake student section was in full force during the Thursday, Jan. 27, game against rival Breck. Photo by Adam Crane 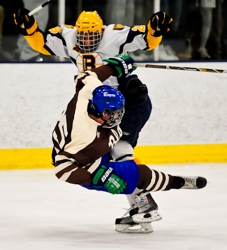 Not many teams would sign up to play three straight games against St. Thomas Academy, Totino-Grace and Blake.

Breck did just that and played all of the tough, Class 1A Top Ten matchups on the road.

While the Mustangs were winless during the road trip, surrender is not an option for the reigning Class 1A State Champions as well as Breck coach Les Larson.

“We’re a young team,” Larson said. “We have to refocus, rededicate ourselves and keep working.

“We also need to execute. I think the desire was there tonight (Thursday, Jan. 27, against Blake) but we turned over the puck 40 times. That’s not like a Breck hockey team. I think lack of consistency usually shows you immaturity.”

Having defeated Blake during both games last season, winning by a combined score of 12-2, Breck is no stranger to the rivalry game.

“It’s always the same,” Larson said. “It’s intense. Both sides want it bad. Sometimes both sides get a little carried away but this was a quality hockey game.”

Ryan Hayes made 24 saves and George Ordway had three points (one goal, two assists) in Blake's 4-2 victory over rival Breck on Thursday, Jan. 27.

The Bears took advantage of their three power-play opportunities scoring each time they held the advantage.

It was Breck's third straight loss as the Mustangs have also been defeated by St. Thomas Academy (Jan. 22) and Totino-Grace (Jan. 25). All three games have been on the road.

The Mustangs look to break out of their funk when they return home to host the St. Paul Saints on Saturday, Jan. 29, at 3 p.m.

Blake will take on St. Paul Johnson on Saturday, Jan. 29, for a 3 p.m. at The Blake School Ice Arena. 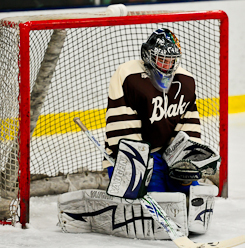 1. Ryan Hayes, Blake
The senior goaltender snagged 24 saves during his team's 4-2 victory. Hayes (pictured above) sprawled and crawled as he earned each save and he showed great poise in-between net.

2. George Ordway, Blake
It was a scary moment in the second period when Ordway was checked hard into the boards but it didn't put a damper in his play. The senior forward was all over the ice and took advantage of each shift. Ordway scored one goal and added two assists in the contest.

3. Johnny Austin, Blake
The ninth grader picked a great time to score his first goal of the season. Austin (pictured below) had a game to remember scoring the first goal of the rivalry game and assisting on two others. 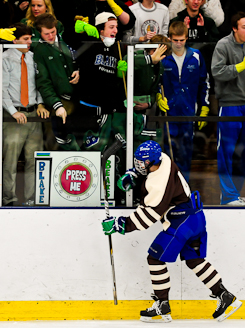