Bradley Golant scored twice in the third period of the Cougars' 3-1 victory over the Panthers. 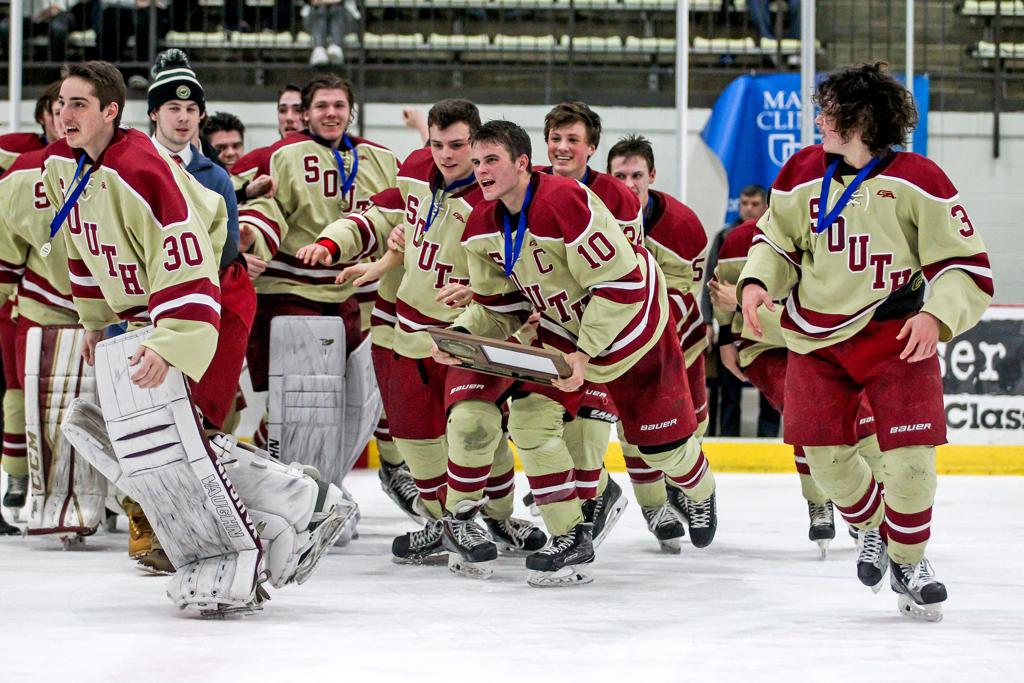 Lakeville South seniors Joshua Ess (10) and Bradley Golant (3) lead the charge to celebrate the Class 2A Section 1 championship after a 3-1 victory over Lakeville North. Photo by Mark Hvidsten, SportsEngine

He plays hockey at a single speed.

Unleashing Golant on the opposition is akin to dropping a lion into a herd of sheep. Coaching him is simple enough. Just send him over the boards and watch the mayhem ensue.

Golant, a 5-foot-8, 160-pound senior forward, left a trail of destruction on Thursday in the Class 2A, Section 1 championship game, scoring twice in the third period to lead No. 2-seeded Lakeville South to a 3-1 victory over top-seeded Lakeville North at the Rochester Rec Center.

The victory avenges South’s two regular-season losses to the archrival Panthers and sends the Cougars to the state tournament for the first time since 2012.

“He’s the hardest worker I’ve ever seen,” Lakeville South senior defenseman and University of Wisconsin commit Josh Ess said. “The guy deserves it for sure.”

“Hard-working plays. Rebounds at the net. Back doors. The guy knows how to put the puck home. I’m happy for him.”

Golant, who also plays tennis at Lakeville South, leads the Cougars with 17 goals this season. His 31 points is second only to Ess’s 33. If Lakeville South was going to beat Lakeville North, playing in its 12th consecutive section title game, it only figured that Golant was going to have to play a starring role.

“I have been dreaming for this moment since I was a little kid,” Golant said. “And I finally got my opportunity to play in the section final, and I just worked my butt off the whole game, and we got it done.

Golant said he has been attending the Section 1 final in Rochester for years, just waiting for his chance on the big stage. Not to get ahead of himself, but he’s also been thinking more than a little about a potential trip to the state tournament. Specifically, he’s been readying himself for the YouTube phenomenon that is the Minnesota State High School All Hockey Hair Team.

Blessed with flowing, curly locks, Golant said he has been growing out his hair since last spring. All in anticipation of skating out on the Xcel Energy Center ice in St. Paul in front of about 20,000 fans and a statewide television audience.

“Yeah, I’ve been getting ready for the state tournament, baby,” Golant said. “The all-hair team, hopefully I can get on that.”

Golant’s first goal came on a gorgeous back-door play during a Cougars power play. He took a cross-ice feed from Jack Olsen and deposited the puck into an open net before Lakeville North goaltender Buzz Eigner could catch up to the play.

His second goal came off a rebound of a Zach Zemlak point shot. Both goals sent the Cougars’ bench, not to mention the raucous Lakeville South student section, into a frenzy.

“It’s like putting gas to a fire,” Ess said about the Cougars’ reaction to Golant’s goals. “The guy is electric.”

As for his hair, expect it to be nothing short of spectacular next week. 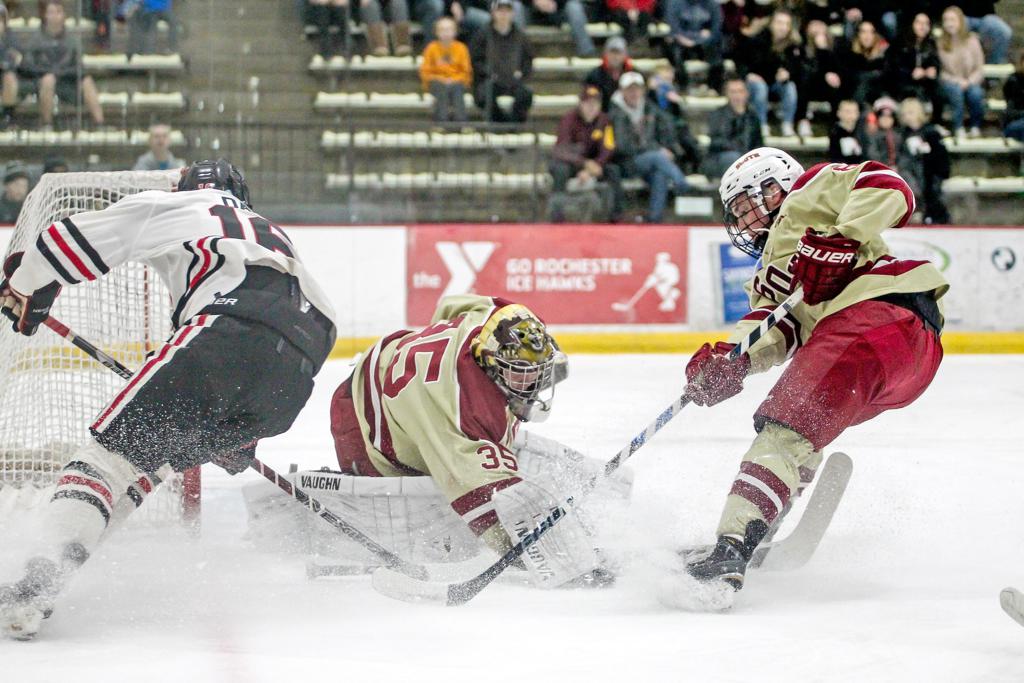 Senior forward Bradley Golant scored twice in the third period to propel No. 2-seeded Lakeville South to a 3-1 victory over No. 1 seed Lakeville North on Thursday night in the Class 2A, Section 1 championship game at the Rochester Rec Center.

Golant scored on a back-door play on a power play two minutes into the third period to break a 1-1 tie, then scored again on a rebound just outside the crease just more than three minutes later. The goals were the 5-foot-8, 160-pound Golant’s team-leading 16th and 17th of the season.

Lakeville North, making its 12th straight section final appearance, beat Lakeville South by scores of 3-2 and 6-2 in the regular season. 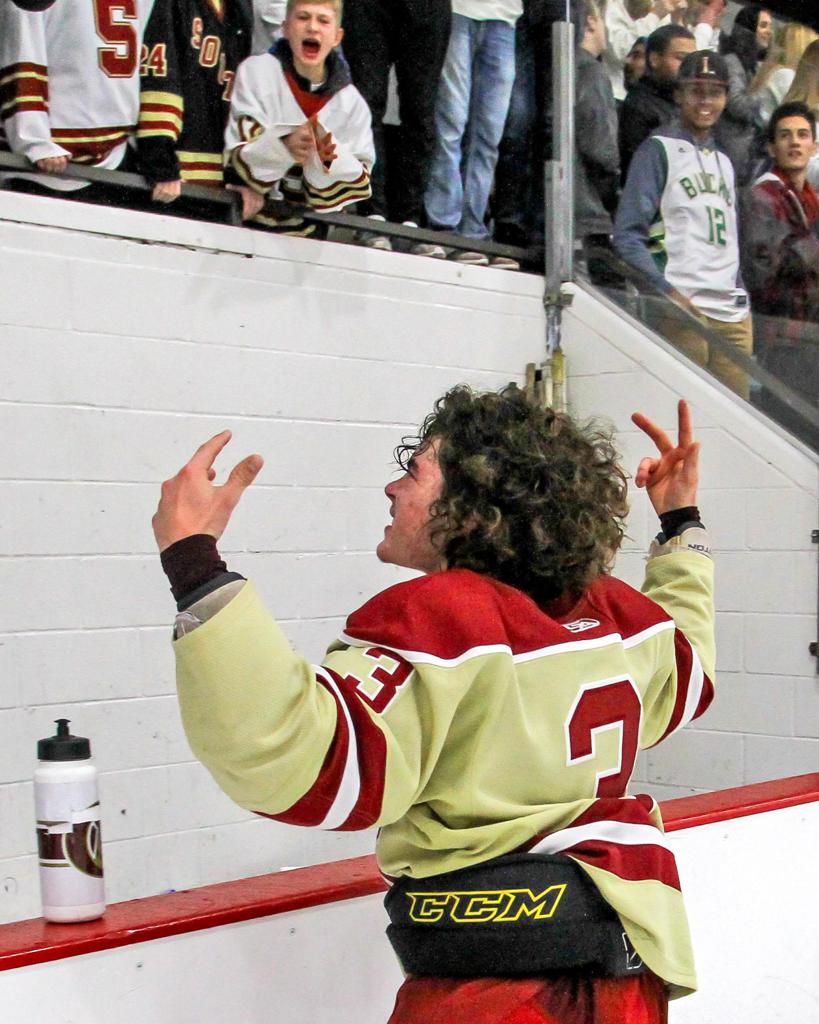