Grand Rapids knocks off Duluth East in a double-overtime thriller

Micah Miller assisted on the Thunderhawks first two goals before scoring the winner in the second overtime. 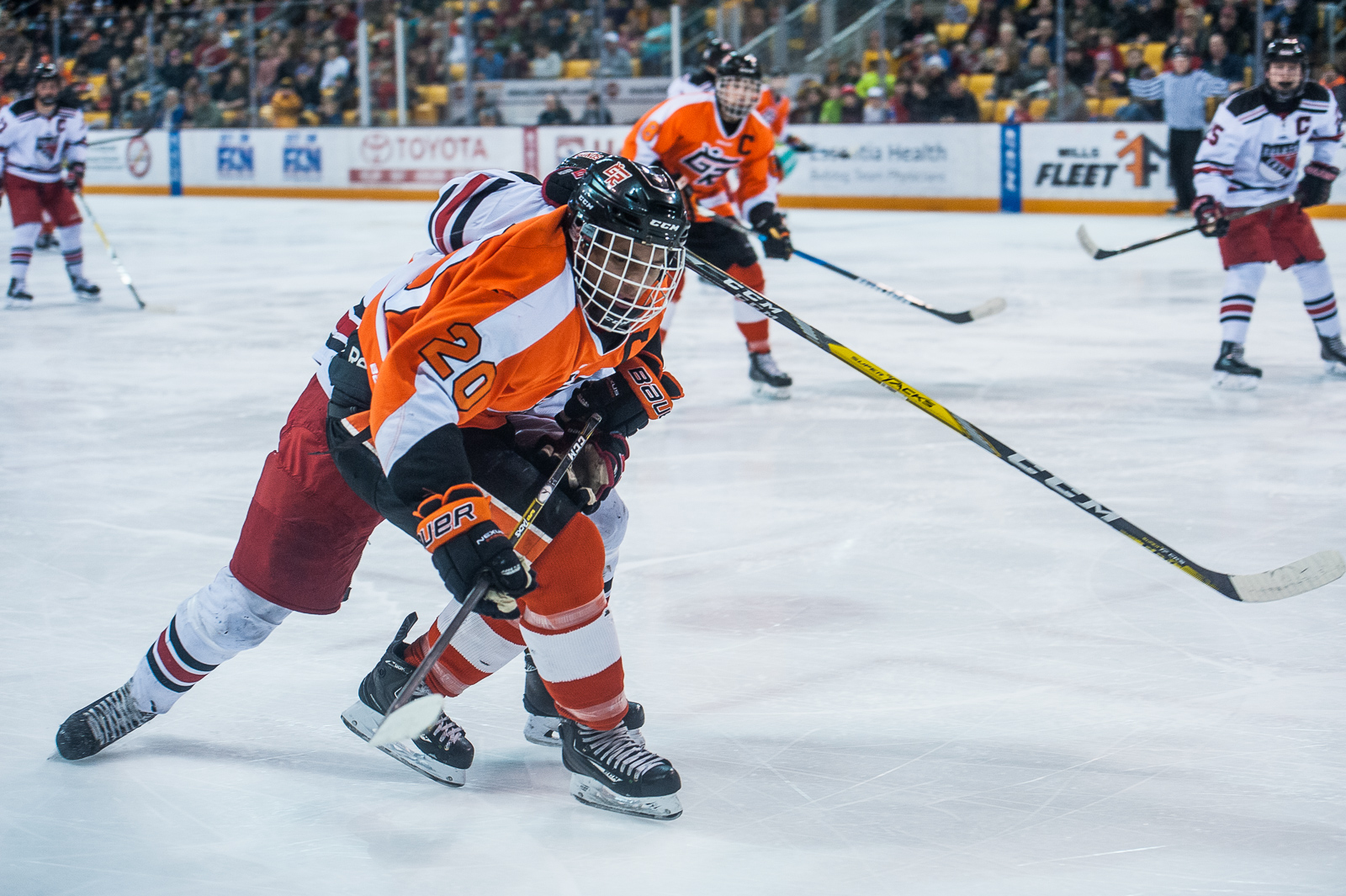 Micah Miller had two assists and the game winner in Grand Rapids' 3-2 double-overtime win in the Class 2A, Section 7 final. Photo by Matthew Moses, SportsEngine

Grand Rapids showed what Minnesota high school hockey is all about after an exciting 3-2 double-overtime victory against Duluth East to claim the Class 2A, Section 7 championship and advance to the state tournament for the second straight year.

The teams met at Amsoil Arena on Thursday in front of a crowd of 7,054 people in a rematch of last year’s Section 7 championship match-up.

Both the Thunderhawks and the Greyhounds played physical and fast through all three periods and the first eight-minute overtime to force a second overtime, where Grand Rapids eventually came out on top.

Senior captain Micah Miller solidified the Thunderhawks' spot in the state tournament with a top-shelf goal from the hash marks ten minutes into the second overtime.

Grand Rapids starting goalie Zach Stejskal remained calm throughout the five periods of hockey with a performance that can only be described as phenomenal, making 45 total saves.

“We owe everything to Zach,” said Thunderhawks head coach Trent Klatt. “He was the calm that just allowed us to sit back, relax and play hockey. He was everything that we asked him to be.”

Klatt was not the only person to praise Stejskal on his performance tonight, as teammates Micah Miller and Blake McLaughlin both agreed he was the backbone of the team’s success this evening.

“Zach really stood on his head tonight, he was amazing,” said Miller.

“We probably owe him some breakfast in the morning to be honest,” added McLaughlin with a laugh.

Klatt has reached two straight state tournaments and is in his second year leading the Grand Rapids team. Klatt knew coming into Section 7 that he would face coach Mike Randolph and Duluth East, and he was right.

“This is section 7, this is what Mike Randolph has done. It’s East’s section and any team that’s going to come out of this section has to go through him. He does a fabulous job, puts great product on the ice and you have to beat him.” said Klatt.

It is no wonder that it took over 78 minutes of play for the Thunderhawks to emerge victorious. After several different scoring opportunities from members of the Grand Rapids roster, Miller was able to end the game for the team.

When asked about team goals for the state tournament, Grand Rapids agreed that the ultimate goal is to win it all.

“We are looking for a state championship, that’s what we’ve been looking for all year. Just gotta take it shift by shift and take it one game at a time to advance through the tournament.” said Miller.

“This group is certainly a group that’s been there before,” said Klatt, “We’re gonna go down there and give it our best effort and see what happens.” 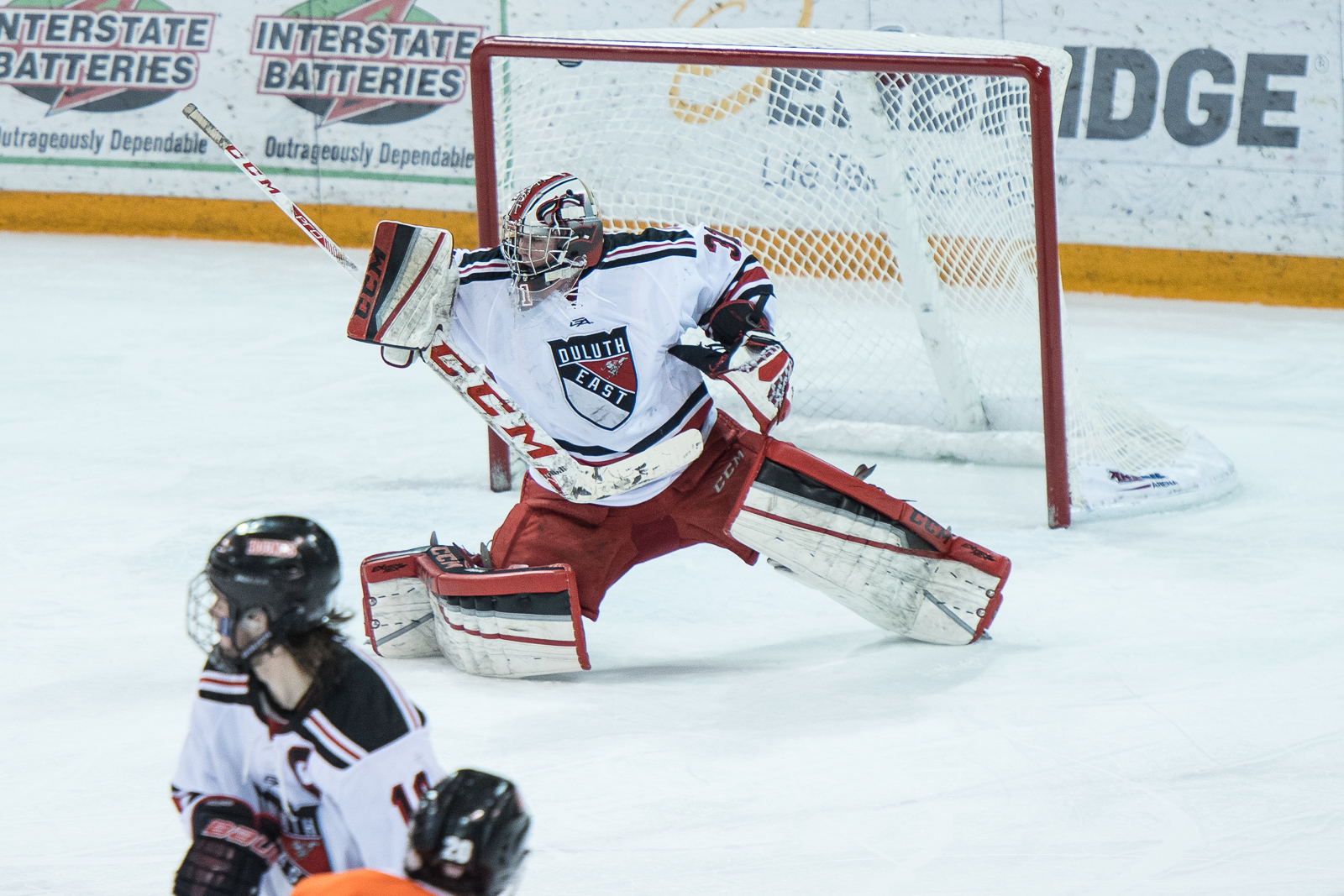 Grand Rapids will be heading to the Class 2A state tournament again this season after defeating Duluth East 3-2 in double overtime at Amsoil Arena.

A goal from Micah Miller late in the second overtime propelled the Thunderhawks (20-7-1) past the Greyhounds (18-9-1) to take the title of Class 2A, Section 7 champions for the second year in a row.

At the end of the first period, the shots on goal were tied at 12 per team, foreshadowing the even play pattern the rest of the game seemed to follow.

The second period was similar to the first, with Grand Rapids capitalizing on a power play goal just 55 seconds into play, but, once again, the Greyhounds answered, erasing their one-goal deficit less than four minutes later with an even strength goal from forward Garret Worth.

The scoring dried up after Worth's goal, with the third period and the first overtime leaving the scoreboard at 2-2. At the end of the first extra period, the shots on goal were tied once more at 42-42.

The atmosphere was electric as a crowd of 7,054 filled Amsoil Arena with deafening noise at the start of the 15-minute second overtime. Both teams put forth all the effort they had left, forcing turnovers in both zones, but were unable to put a shot on net.

The Thunderhawks finally capitalized with 6:42 left to play in the second overtime. Micah Miller blasted a shot past Kirk Meierhoff, causing the team, and the fans, to erupt and sending helmets, sticks and gloves flying from the Grand Rapids bench accross the ice in celebration.

Thunderhawks goalie Zach Stejskal finished with 45 saves while Kirk Meierhoff made 46 for the Greyhounds.