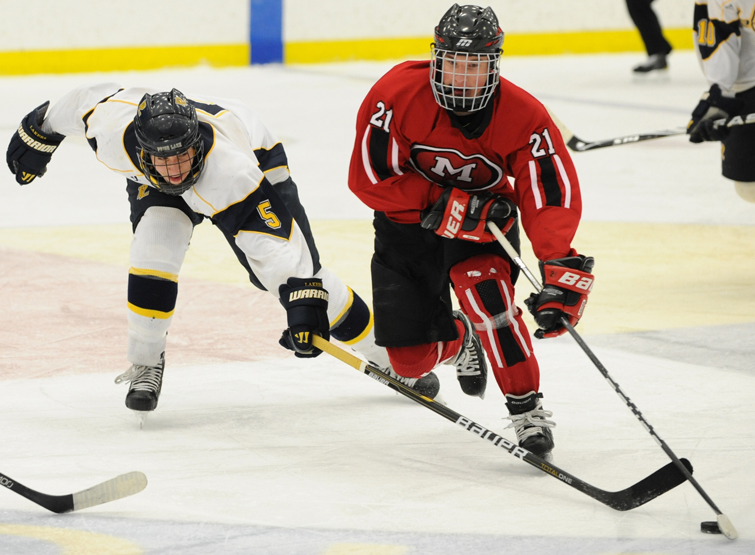 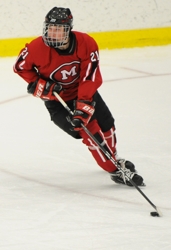 Ville Rantanen was in Finland, making decisions about his future.

He wanted to come to the United States as foreign exchange student. He wanted to play hockey.

“You can choose from the different states,” said Rantanen, a senior from Helsinki. “I didn’t get to choose the city.

“I just chose Minnesota for the hockey.”

Rantanen was placed in Mankato, where he attends West High School and has helped shove the Scarlets on the state radar screen with his eye-popping scoring exploits. Through 19 games, the 6-foot, 180-pound wing has scored 39 goals, the most in the state through Jan. 28.

“He’s a good player,” Prior Lake coach Joe Pankratz said after his Lakers held Rantanen to an assist in a 3-3 tie on Friday, Jan 28, at the Dakotah! Ice Center. “I would say the point total is different if he is playing in the South Suburban or another conference, obviously.

Through two periods against the Lakers, Rantanen didn’t distinguish himself as anything more than a player with noticeably quick feet and hands. He struggled to find openings in the Prior Lake defense and had only a couple of scoring chances.

All of that changed in the third period and overtime session, when Rantanen – who has been held without a goal in just three games this season counting Friday – emerged as the most explosive player on the ice. Rantanen unloaded a barrage of heavy shots on Prior Lake goaltender Kyle Miller, most of them ticketed for the upper corners of the net. 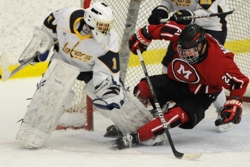 “I was just kind of waiting for him to make his move,” said Miller, who finished with 31 saves, about 10 of them coming courtesy of Rantanen blasts. “I thought he would deke a little more, but he took his shot.”

Playing in the Big 9 Conference and against mostly southern Minnesota competition certainly hasn’t hurt Rantanen’s point total. He scored a combined 11 points in two games against Mankato East, which has won just one of its 18 games so far.

Rantanen scored 19 goals in the Scarlets’ first five games, but his production has slowed in the season’s second half as West’s schedule has become more difficult and opposing defenses pay close attention to the Flying Finn.

“I don’t know if maybe the season is getting to him, you know, being away from home,” Mankato West coach Curtis Doell said. “He is just not getting the full 51 minutes in.

“He turned it on again in the third period. When he is moving his feet and skating and shooting the puck instead of trying to beat everybody on the ice, he is a lot more successful.”

Fueled in part by Rantanen’s scoring – his 61 points puts him second in the state through Jan. 28, eight behind leader Tyler Heinonen of Delano -- Mankato West is 12-5-2 after going 11-14-1 last season. The Scarlets are in contention for the Big 9 Conference title and are considered one of the teams capable of beating Section 1A favorite Rochester Lourdes and earning a trip to the state Class 1A tournament.

Rantanen said he’s had to adjust to a more physical style of play than what he had grown accustomed to in Finland. He’s also noticed that opposing teams have been paying attention to the state scoring charts.

Doell has seen it, too.

“He’s got to realize we are playing the North American game,” Doell said about Rantanen. “Everybody is hitting, everybody is going for you. They know who you are, so they are all coming.” 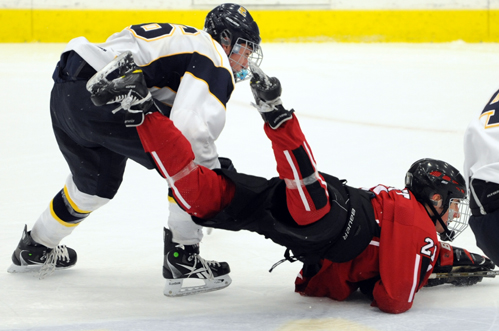 Ville Rantanen of Mankato West takes a tumble in front of Prior Lake defender. Photo by Helen Nelson

Prior Lake notched one of the biggest wins in the program’s history earlier this season when the Lakers upended Bloomington Jefferson 4-2 on Jan. 20 at the Dakotah! Ice Center in Prior Lake.

“When we played Jefferson, we played really well,” Pankratz said. “We just did a lot of things right.”

Two nights after the big win over the Jaguars, the Lakers lost 3-1 to high-powered Eagan. The score was 2-1 late in the third period when the Wildcats scored a shorthanded goal to ice the victory.

“We had a good run there where we were playing pretty well,” Pankratz said after Prior Lake tied Mankato West 3-3 on Friday, Jan. 28. “Right now we’re not playing as good as we can play.”

Prior Lake, formerly a member of the Missota Conference, is now in the newly formed South Suburban Conference, a league that features state powers such as Burnsville, Apple Valley, Bloomington Jefferson and Eagan.

The Lakers are 5-10-3 and could play the spoiler role in the Section 2AA playoffs. Burnsville, Edina and Holy Angels are likely to receive top seeds in the section tournament, and Prior Lake could face Jefferson again in the playoffs.

Mankato West at Prior Lake

State goal-scoring leader Ville Rantanen, a Mankato West senior, was held to a single assist as the Scarlets skated to a 3-3 tie with Prior Lake on Friday, Jan. 28, at Dakotah! Ice Center in Prior Lake.

Rantanen, a foreign exchange student from Finland who has a state-best 39 goals, didn’t have many scoring chances in the game’s first half.

But, like his Mankato West teammates, Rantanen got better and better as the game wore on and had numerous booming shots and slick one-on-one moves in the third period and in the 8-minute overtime session.
Prior Lake appeared to have the game all but won late in the third period when senior forward Ryan Dorn scored with 1:37 left in regulation. The Big 9 Conference-leading Scarlets (12-5-2) needed just 10 seconds to answer, however, as freshman defenseman Scott McKissick’s floater from the left point found its way to the back of the net.
Other than that late flurry of goals, Prior Lake junior goaltender Kyle Miller and his Mankato West counterpart, senior Jake Kaufman, were busy exchanging spectacular saves.
Miller made numerous stops on rising shots from Rantanen, while Kaufman faced several flurries of point-blank shots from the Lakers. Miller finished with 31 saves while Kaufman had 39.
Landon Brown and Andrew Frentz each scored goals for the Scarlets, while Matt Andrews and Matt Crist has goals for the Lakers (5-10-3).

1. Jake Kaufman, Mankato West
After a somewhat shaky start in which he gave up a couple juicy rebounds, Kaufman settled into a brick-wall groove. He stopped rush after Prior Lake rush and was at his best in the late stages of the third period and overtime, when the pressure mounted and the intensity reached its pinnacle. Kaufman finished with 39 saves.
2. Kyle Miller, Prior Lake
This night belonged to the goaltenders. The Lakers junior didn’t see much of state goal-scoring leader Ville Rantanen in the opening two periods, but all that changed in the third and overtime when Rantanen unloaded a barrage of heavy shots ticketed for the upper corners. Miller was in position to stop all of them, and finished with 31 saves.
3. Ville Rantanen, Mankato West
The senior from Finland started slow and had just one assist, but by the third period and in overtime he was generating at least one and usually two great scoring chances every shift. 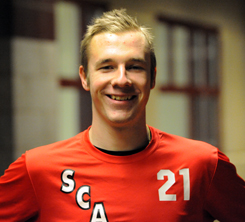