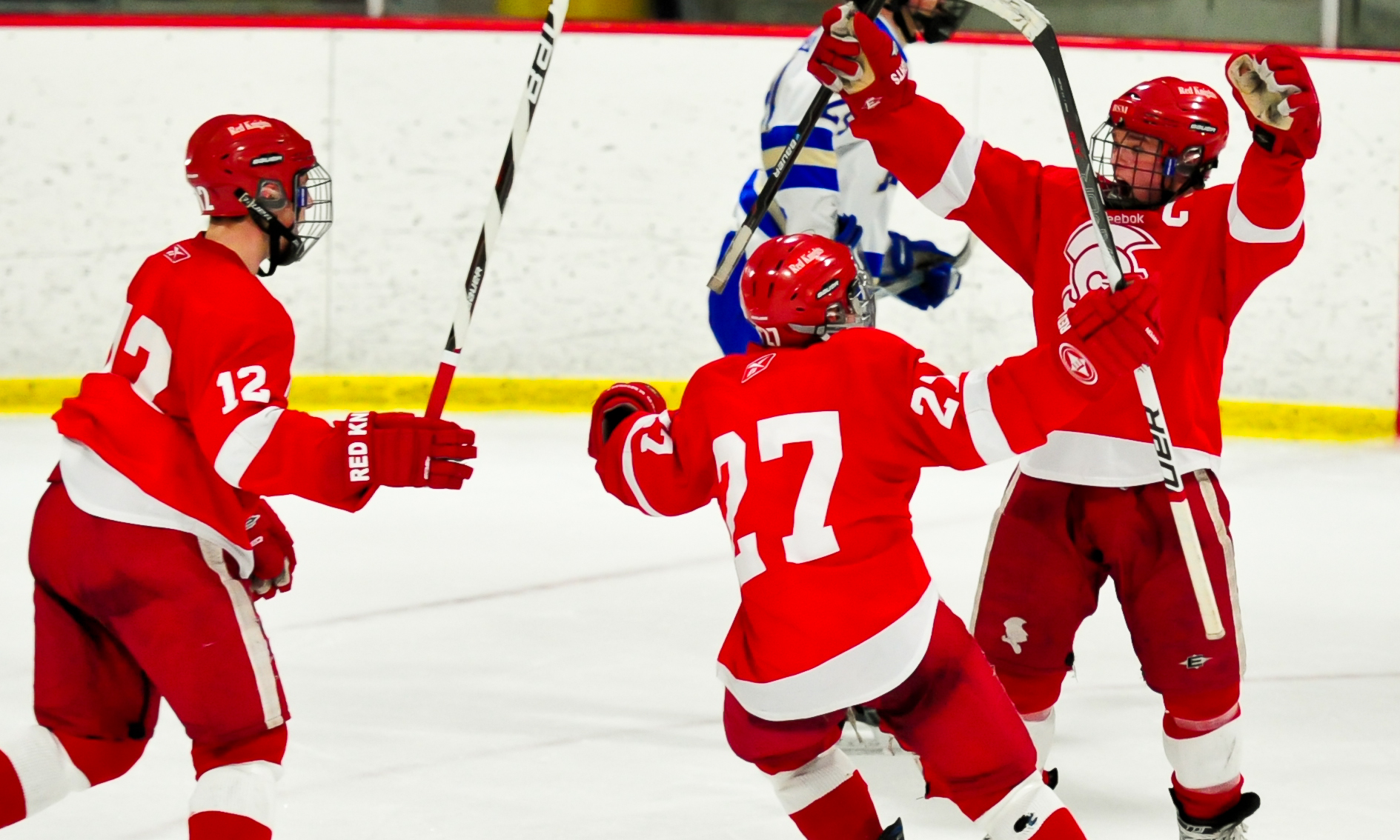 Red Knights' forward Pat Steinhauser (far right) celebrates one of his four goals with teammates Grant Besse (No. 12) and Dan Labosky (No. 27) during the Saturday, Jan. 29, matchup against Holy Angels. Photo by Adam Crane

In a game that saw nine different goal-scorers, it may seem hard to pick out one star of the game.

That wasn’t the case, however, during Benilde-St. Margaret’s 8-6 victory on Saturday, Jan. 29, over Holy Angels.

From the beginning of the game, it seemed like it was Pat Steinhauser’s night.

The Red Knights’ senior forward registered six points (four goals, two assists) in the victory and scored in each period. 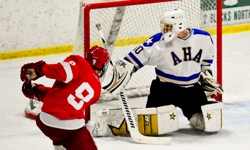 “It was one of those things where we made three mistakes and three mistakes ended up in the back of our net,” Red Knights’ coach Ken Pauly said. “All of a sudden we were down 5-2 and I was kind of worried.

Neither did the rest of the Red Knights.

“We were a little bit upset and coach told us to keep going,” Steinhauser said. “That’s what we did. We’re not a team that quits and we pride ourselves to come back. When you get down like that, there’s a lot of game left to play and that’s what we were thinking.”

“I just felt that (Quale) wasn’t sharp tonight,” Pauly said. “I don’t blame him for any goals but I just didn’t feel like he was sharp. After the fourth one I was thinking I might have to make the change. After the fifth one, we had the two-man advantage on the power play. I thought it was a perfect opportunity to settle our power play down and take advantage to change the goalie and get him warmed up.

“It’s just like changing a pitcher and getting a new look.”

The Red Knights would score on the 5-on-3 power-play – a goal by Jake Horton, assisted by Steinhauser and Christian Horn – and Benilde-St. Margaret’s found the momentum slowly shift in its direction.

“Well in retrospect (calling a timeout) was a great move by them,” Holy Angels assistant coach Jeff James said. “They have a lot of dangerous offensive players and when they move the puck around they can really make it tough and challenging. They did that tonight and we weren’t able to react as well as we’d like. We’d like to have a couple of those back, of course. Credit to them.”

Benilde-St. Margaret’s would regain momentum by scoring four straight goals of its own – including Horton’s power-play goal – and kept that momentum throughout the game.

Steinhauser completed his hat trick during the four-goal run by the Red Knights and assisted on two others.

“The seniors stepped up to do their job," Horn said. "(Steinhauser) really came through for us tonight.

"Honestly, we just showed a lot of character out there. Our team came out to play. We were down 5-2 and we knew we could climb back. The boys wanted it and they showed it. We have to get a little better defensively but offensively we showed that we wanted this win.”

“Coming in, we wanted to grind it out,” Steinhauser said. “We wanted to use our speed going against these guys. We knew they were a big team and they knocked down Eden Prairie. We knew there wouldn’t be any light chances so we had to work for them.”

Steinhauser and Horn combined for 10 points (five goals, five assists), seven of them coming on the power play.

“This was a big game for them,” Red Knights’ coach Ken Paul said. “I won’t say they have struggled but they haven’t been happy with their production lately. Horn has been out for a while too (with a concussion). So when it gets down to it, for those guys to have a breakout game was big.

“The last couple of weeks it’s been the sophomore line (with Grant Besse, Dan Labosky and T.J. Moore) that’s been carrying us. It was good to have Steinhauser’s line carry us tonight.”

Horn has missed two games this month after suffering a concussion during the Jan. 11, game against Edina.

He admits that the successful performance against Holy Angels was a welcome one.

“It’s a boost of confidence, that’s for sure. You love coming back and skating. It feels great to come back and play a good game and have a great game with the guys. That third line really did their job, too.

In this case, that fun resulted in a win for Horn and the Red Knights.

“It’s a nice win,” Pauly said. “It’s not exactly what you want for playoffs because you lose games when you play that way. There were some freaky bounces that happened to us early on.

“The fact that we had the offensive capacity to come back being down 5-2 says a lot.”

Now the Red Knights have one thing on their mind: the top spot in the state.

“We want to be the number one team in the state, there’s no doubt about it,” Horn said. “We’ve been fighting for that spot all year and people keep doubting us. We’re just trying to put that stamp on. We’re here and we’re here to stay.”

Q and A with Jeff James

Holy Angels' assistant coach Jeff James took some time after the Saturday, Jan. 29 matchup against Benilde-St. Margaret's to speak about the game.

Question: From a fan’s perspective, the 8-6 game was an exciting one with a lot of scoring. What were your thoughts on the game?
Answer: Well from a coaching standpoint, I think both coaches feel that there’s some things that can be cleaned up here as we get ready for the playoff run. We were on the wrong side of it tonight. Hopefully we’ll bounce back and get what we’re really after at the end.

Q: There's no doubt tonight's game was a shootout. How are those games like to coach?
A: With Benilde, they’re loaded with a lot of skill and they play well-disciplined hockey. At times, if you don’t do the same thing the puck ends up in your net. From a fan standpoint it can be exciting. A lot of times it’s little breakdowns here and there that make the difference.

Q: Holy Angels has played well recently with a win against Eden Prairie (Jan. 20) and playing a close game with Benilde-St. Margaret’s. What has this last week said about the Stars?
A: I think it tells us that we’re in the thick of things here. We know we need to tighten up a few things here and there. A lot of teams seem to be milling around. No one’s really taken it and run away yet. Everyone is beating up on everyone. Sun will come up tomorrow and we’ll be fine. We just need to learn from this and build on it for our next time out.

1. Pat Steinhauser, BSM
The senior forward had a game to remember scoring 6 points (4 goals, 2 assists) in the offense heavy game against Holy Angels. The Holy Angels student section let Steinhauser have it in the first period by calling him "psycho" when the co-captain argued a no-goal call by the officials, but he scored a power play goal seconds later and truly had an "insane" game. He scored in each period and had three power play points.

"If there’s a better forward out there I don’t know who he is, cause that kid’s a stud," Pauly said referring to LaBate. "He can single-handedly beat you."

LaBate (pictured below) scored two goals - one on the power play - and added an assist for the Stars. The senior forward was a presence at both ends each shift.

3. Christian Horn, BSM
After suffering a concussion during the Jan. 11, game against Edina, Horn's late season play may have been in question. The Jan. 28 game against Holy Angels provided an answer as the junior forward notched 4 points (1 goal, 3 assists) in the victory over the Stars. 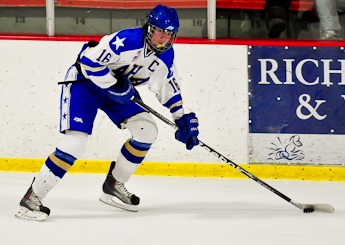 Holy Angels held a 5-2 goal during the second period after Mario Bianchi caught Red Knight's Justin Quale out of the net for a shorthanded goal.

Red Knights' coach Ken Pauly called a timeout prior to a 5-on-3 power play to rest his team and replace Quale with Anders Jecha.

Benilde-St. Margaret's would respond with four straight goals to end the second period with a 6-5 lead.

Despite another Bianchi goal that tied the game at six, the Red Knights' responded with a goal by Mike Blessing. Steinhauser capped the game off with his fourth goal with under seven minutes remaining in the third and the Stars could not respond.

Both Quale and Jecha made six saves but Jecha earned the win being in goal during Blessing's game-winner.

Brett Pierce made 33 saves for the Stars.

Up next for the Red Knights is a home game when they host Chisago Lakes on Tuesday, Feb. 1, at the St. Louis Park Rec Center.

Holy Angels will look to bounce back as they travel to Farmington on Tuesday, Feb. 1, for a Missota Conference game. 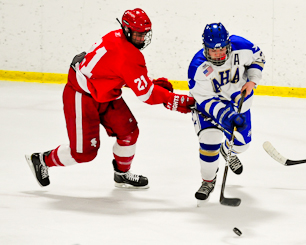