Round two of 'The Game'

The Week Ahead features rematch of northwestern rivals Roseau, Warroad 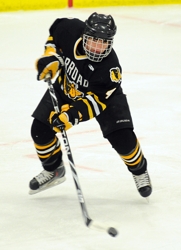 The "granddaddy" of all hockey rivalries enjoys its second showing this winter as Warroad visits Roseau on Tuesday night, Feb. 1.

What a way to kick off the final month of the regular season.

It must be noted that both programs have a razor-thin margin for error as they attempt to quality for the state tournament. Neither is the favorite in its section to this point, as Roseau has fallen behind Bemidji and Moorhead in the Section 8AA seeding race and Warroad has lost ground to Thief River Falls and perhaps East Grand Forks in Section 8A.

Maybe that will bring an even greater sense of urgency to "The Game," if that's possible.

That victory was part of an eight-game winning streak that allowed Warroad to climb out of an early hole. The Warriors suffered an uncharacteristic four-game skid in December, but Foster and his defensive corps helped kick off the resurgence. During the eight-game streak, Warroad allowed just nine goals.

Consistent scoring has been tough to dredge up for coach Albert Hasbargen, although his young "white" line of Austin Streiff, Tyler Elson and Casey Anderson has had its moments.

Defensively, it's tough to find a better pair than Carson Gray (4-15-19) and Hayden Timm (5-9-14), both rugged defenders who add a bit of offensive flair. They'll be key to helping jumpstart the Warriors' offense from the blue line, as well as protecting Foster. 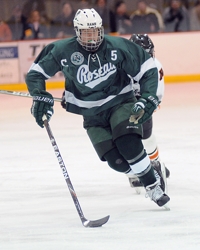 Roseau (8-9-0) also has had an uncharacteristically up-and-down season -- and finds itself needing to close with a flourish to host more than one playoff game.

The Rams lost their first five games of the season, but rallied with seven straight victories behind junior goaltender Jared Strand. Until allowing three goals to East Grand Forks in his seventh varsity start, Strand (7-3-0, 2.46, .865) had given up exactly one goal in each of his first six games.

Roseau couldn't sustain that momentum and lost four of its last five games, including tough losses to Section 8AA favorites Bemidji (7-3 on Jan. 15) and Moorhead (6-1 on Jan. 25).

Coach Andy Lundbohm attributed the streakiness to his team's youth in key positions. The Rams have also suffered injuries that have shaken the forward lines. Against Moorhead, both third-leading scorer Josh Erickson (7-15-22) and fourth-leading scorer Travis Connell (8-12-20) were out.

The one constant has been the excellent play of senior Shane Omdahl (16-12-28), whose goal total is double that of the next highest Ram.  He'll need a healthy crew around him to give Roseau a chance against the Warriors, although both Erickson and Connell are expected to be back in the lineup. 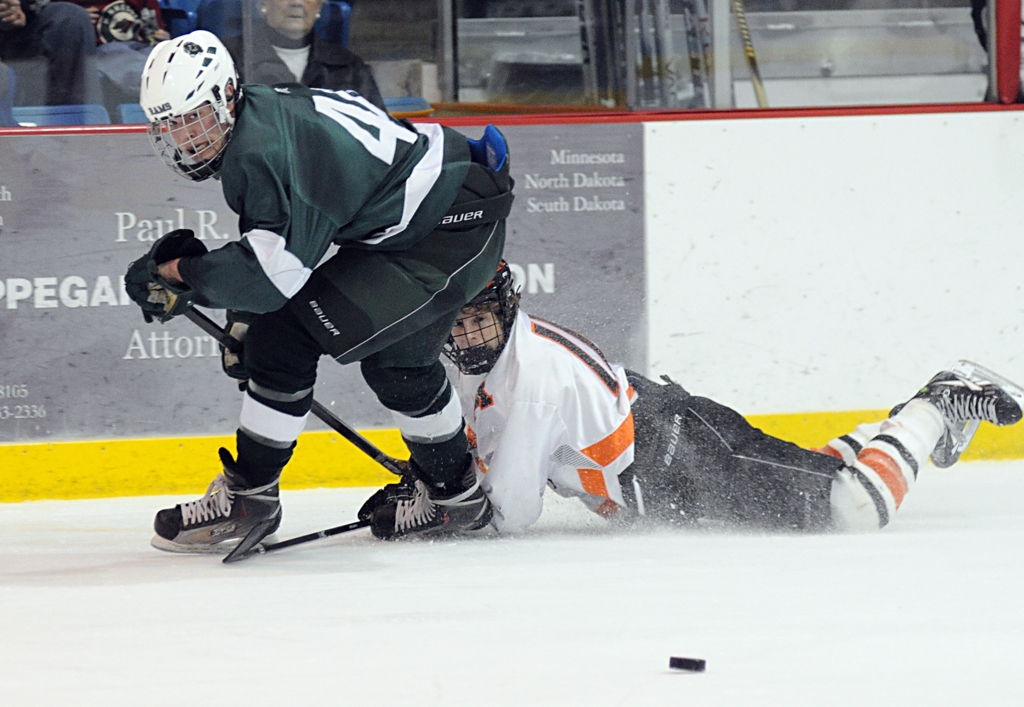 Game of the week

Heading into the final month of the regular season, these two South Suburban rivals appear to be neck and neck for the top seed in Section 3AA. This game should go a long way towards determining the favorite. Eagan and Apple Valley already have played once, with the Wilcats taking a 4-2 decision on Jan. 6 behind two goals from Will Merchant and 30 saves from Tommy Bodeker. Both teams have shown an ability to beat some of the state's top-ranked teams, but also suffered some confusing losses. For all the firepower of Apple Valley's A.J. Michaelson (21-26-47) and Hudson Fasching (14-23-37), Eagan's Merchant (22-11-33) has scored more goals this winter.

It was a rough last two weeks for these Lake Conference superpowers.  Edina dropped like a stone in the rankings after losing three straight games (including a 5-4 loss to Wayzata on Jan. 20).  Since that victory over the Hornets, Wayzata has gone 0-1-2, losing its last game in a surprising 6-0 rout to Minnetonka.  Now both the Hornets and Trojans are looking up at Minnetonka and Eden Prairie in the conference standings.  This game is a chance for the winner to recover from their January swoon, while the loser has an uphill climb.  Each has just one non-conference game remaining (Edina is at Buffalo on Feb. 17 and Wayzata plays Roseau in Moorhead on Hockey Day, Feb. 12).

The past few years, St. Thomas Academy has run into Mahtomedi in the Section 4A playoffs.  This year, it might be Totino-Grace that gives the Cadets their biggest battle.  The Eagles have surged up the Class A rankings recently, courtesy of victories over Duluth Marshall and two-time defending state champion Breck.  Scoring is balanced, with four players scoring in double-digit goals: T.J. Roo (16-24-40), Danny Heck (13-16-29), Xavier Fust (14-13-27) and Derek Loedermeier (13-13-26).  St. Thomas Academy has remained No. 1 in the Class A rankings despite five losses, but those were to Shattuck and four Class AA powers (Duluth East, Hill-Murray and twice to Minnetonka).

This public/private intercity rivalry took on a new look this winter, as Duluth Central essentially joined up with Duluth Denfeld and moved up into Section 7A -- territory Duluth Marshall hopes to protect as its own.  (Note: Central had played in 7A, but Denfeld was in 5A).  After an up-and-down start to the season, the Hilltoppers have been on a roll, winning six of their last seven games.  Last weekend, Marshall traveled to the northwest and shut down both Warroad (5-0) and Thief River Falls (4-2), solidifying its place among the top Class A teams.  Speaking of up-and-down, Central's season has been just that all the way through, as the Trojans have had no more than a two-game winning or losing streak.

While the Iron Range Conference title doesn't have the same cachet it has in past years, these are two perennial contenders for that title -- and the bad blood still remains. Grand Rapids surged into the Class 2A rankings a few weeks back, only to suffer back-to-back losses that knocked the Thunderhawks out. They've responded with four straight victories behind a stout defense that allowed only five total goals, shutting out both Hibbing and International Falls. Earlier this winter, Grand Rapids routed Virginia 7-1 and that has to stick in the craw of coach Keith Hendrickson and crew. The Blue Devils seem to go as their top line goes. Garrett Hendrickson, Travis Eddy and Tom Norlander have combined for 56 of the team's 99 goals.

At one point this winter, both teams were ranked No. 1 in their respective classes (Hermantown in Class A, Eden Prairie in Class AA), but both have fallen from that perch with recent losses. But they haven't fallen far, as they both come in ranked No. 2, making for an interesting battle between two of the best programs in each class -- with the added bragging rights of North vs. South. Believe it or not, there is a recent history in this tilt. The programs played in last year's Hockey Day Minnesota up in Hermantown, with the visiting Eagles taking a tight 4-3 victory behind a hat trick from Kyle Rau. Eden Prairie's Mr. Hockey favorite and many of his teammates are back, but Hermantown is a much different looking team.

Two of the best teams in Section 3A are angling for the top seed in the playoffs, although it hasn't meant as much in that section in recent seasons. New Ulm was last year's section champion and returns a solid club that has lost just four games through January, but Marshall has a nearly identical record. New Ulm gets the leg up thus far based on a 5-2 victory back on Dec. 9 in which the Eagles scored three first-period goals. The Eagles also have the most veteran netminder in the section in Blake Burgau. The Tigers are surging, though, with an eight-game unbeaten streak (7-0-1) since the turn of the calendar year and have a nice rotation of Andrew Noble and Zach McCoy between the pipes.

Both teams appear to be looking up at Thief River Falls in the Section 8A seedings race, but Warroad must win this rematch with East Grand Forks or be faced with the nearly unprecedented task of going on the road in the section semifinals. The Green Wave already defeated Warroad once in their barn, a 3-0 victory back on Dec. 17.  Warroad dumped 36 shots on Green Wave goaltender Hunter Aubol, but couldn't get one past him. Meanwhile, East Grand Forks' top line of Zack Lawdermilt (10-16-26), Cory Mack (8-11-19) and Tommy Hajicek (11-10-21) has been getting the job done and had two goals in that game. Warroad got hot earlier in January with an eight-game winning streak, but has gone just 2-3-0 since.

Another day, another top Lake Conference matchup. This game features the last two Class 2A state champions (Edina in 2010, Eden Prairie in 2009), and two teams who are almost a mirror image of each other in recent weeks. Edina is in the midst of its seemingly annual "January swoon," but has won two straight and might be pulling out of it. Eden Prairie also had a three-game winless stretch in mid-January (0-1-2), but has won three straight since then, including a big 4-2 victory over Minnetonka on Jan. 27. This game might feature the most Division I talent of any this season.