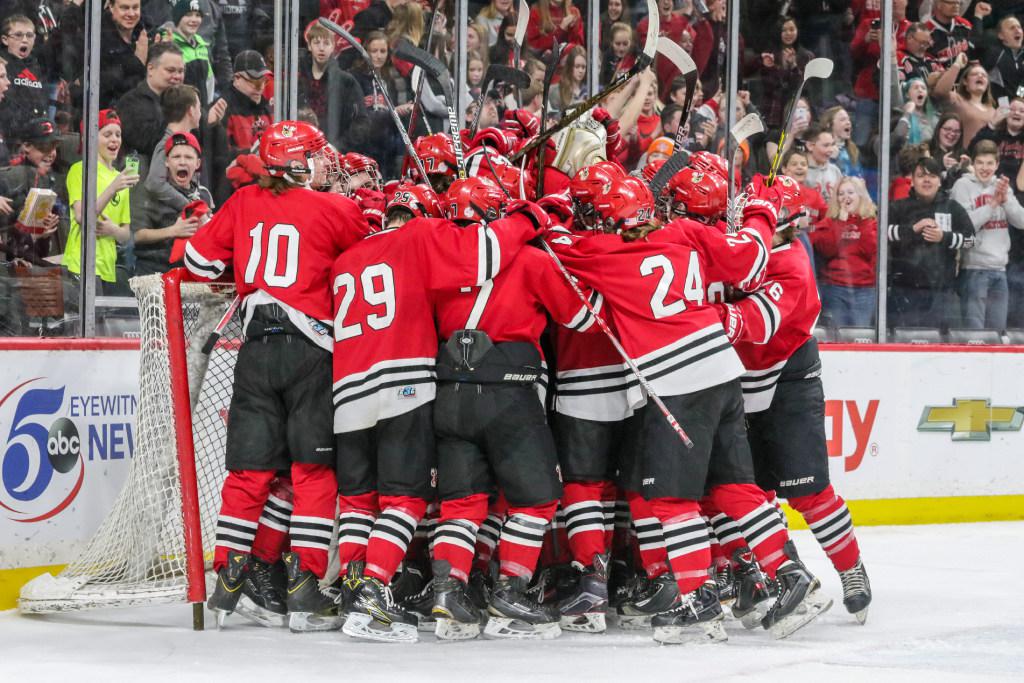 Northfield’s Ryan Bielenberg was stopping everything. Low shots, high shots, breakaways and close-range blasts. Through most of two periods the junior goaltender showed no signs of cracking.

“Frustration was the biggest thing that went through us,” said Monticello/Annandale/Maple Lake senior Nick Zwack, who at one point in the second period punctuated yet another fruitless shift by slamming his stick on the boards as he reached the bench. “We were furious on the bench, just knowing we were getting all these scoring opportunities and they just weren’t falling.”

Then, suddenly, bad luck turned to good. A fluttering, bouncing puck that had no business reaching the back of the net did with 2.3 seconds left in regulation.

Just like that the unseeded Moose defeated Northfield 3-2 on Friday at Xcel Energy Center to reach the state Class 1A championship game in their first tournament appearance.

“Just thinking about it still surreal to us,” said Zwack, who scored the winning goal on a shot to which he didn’t attach much hope. “It’s lucky that it did go in.”

Monticello/Annandale/Maple Lake (24-6-1) trailed Northfield (21-7-3) 2-0 with all but a minute left in the second period in the semifinal matchup of unseeded teams making their tournament debuts.

Moose coach Eric Nelson had been preaching all game to keep shooting and that, eventually, good things would happen. But even he had his doubts.

“Obviously their goalie was playing really well,” Nelson said. “We were kind of concerned about when that something was going to go in.”

Moose leading scorer Ben Ward beat Bielenberg with a minute left in the second period. Casey Chiodo tied it at 2 with 6:21 left in the third before Zwack, who scored twice in Wednesday’s quarterfinal game against Delano, completed the rally.

Bielenberg finished with 37 saves, including 28 in the second and third periods.

“They deserve it,” said Northfield coach Mike Luckraft said about the Moose. “They out-played us. Ryan just played phenomenal, he held us in there as long as he could.”

Zwack, a senior forward who has committed to play baseball at Xavier, took a feed from Charlie Voller along the board and fired a fluttering, low shot that beat Northfield goaltender Ryan Bielenberg.

Senior Casey Chiodo scored on a power play with 6:21 left in the third for the Moose (23-6-1), one-timing a low shot past Bielenberg to tie the score at 2.

Bielenbeg, a senior, stopped Troy Dahlheimer with a left leg pad save in late in the second period. Moose leading scorer Ben Ward fired a shot just over the crossbar on another breakaway chance late in the first period.

Conner Malecha put Northfield (21-6-3) ahead 2-0 early in the second after one-timing Nicholas Kvernmo’s no-look feed from behind the net.

Northfield’s Jacob Halvorson opened the scoring 6:39 into the first period, slamming home a rebound of a knuckling shot by Jackson Cloud that Monticello/Annandale/Maple Lake goaltender Tyler Klatt had trouble controlling.

Northfield defenseman Gage Hofstad made a great diving play in the crease to break up a Moose scoring chance midway through the opening period.

With 6:29 left in first a Moose goal by Honza Stibingr was waved off after it was reviewed by off-ice officials. Stibingr, following his initial shot, collided with Bielenberg in the crease just as the fluttering puck bounced off his midsection and went in.

The Moose finished with 40 shots compared to Northfield’s 21. 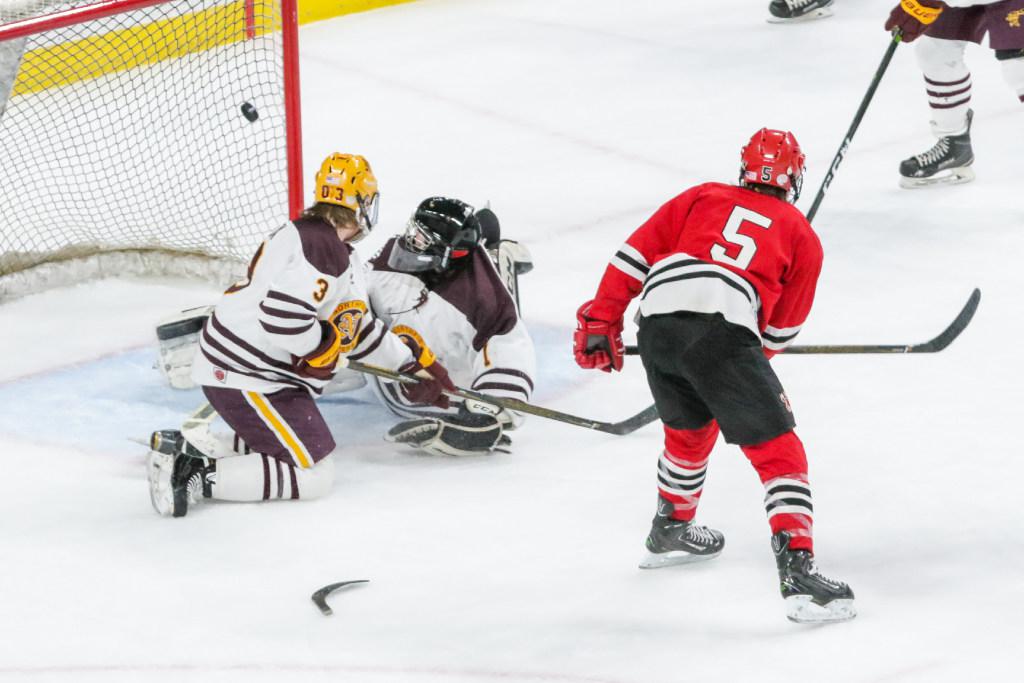