A physical and star-filled grudge match between familiar foes was narrowly decided. 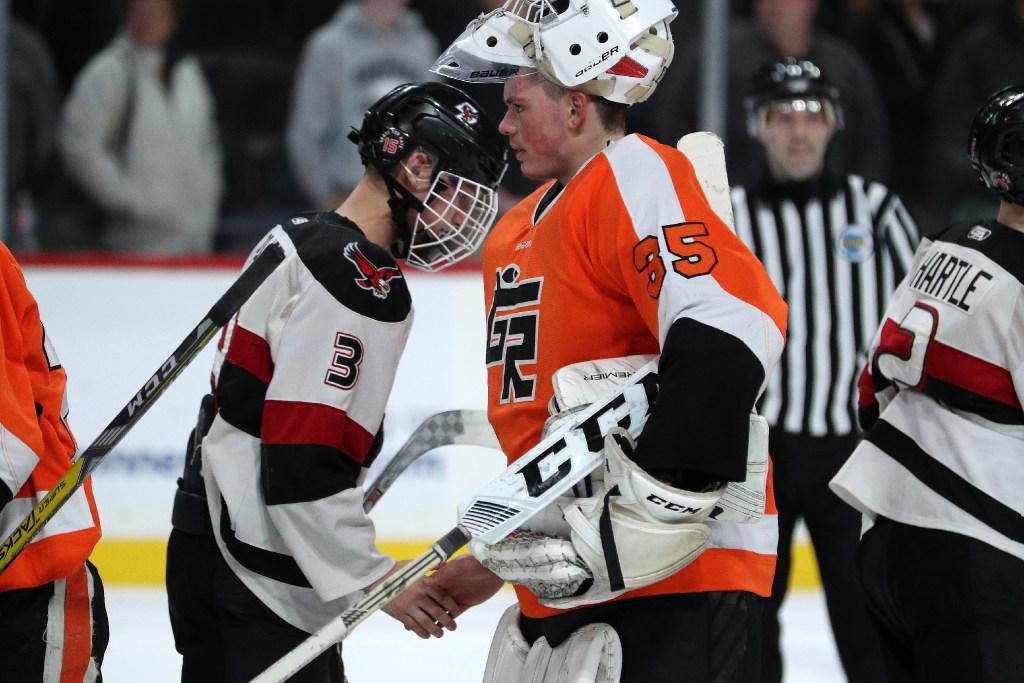 Nick Leivermann introduced himself to Micah Miller in the most physical of ways.

Keaghan Graeber did the same to Jack Jensen.

Casey Mittelstadt? He might as well have been a crash test dummy for all the abuse he took.

As fast as Friday’s Class 2A semifinal between Eden Prairie and Grand Rapids was, and it was played at a frenetic pace from the opening drop, the physical play was equally stunning. The hits just kept coming in Grand Rapids’ 3-2 victory over Eden Prairie at Xcel Energy Center.

“I knew that it was going to be a physical game, I just kind of expected it,” Graeber said. “I think when we played the body we got the better of it.”

The board-shaking theme of the game could be attributed to a variety of factors:

• It was a rematch of last year’s 6-2 Eden Prairie runaway in the state semifinals. A loss that no doubt fueled the Thunderhawks’ desire to hit anything wearing red, black and white.

• It was a rematch of a 3-1 Grand Rapids victory on Dec. 16 at a holiday tournament in Edina. There were 12 penalties called in that one, three of them for slashing.

• Both teams were trying to shut down the other’s top scoring lines. Best way to do that? Jolt the big guns with repeated body blows.

“Our kids are big and strong; we’ve played that way all year long for the most part,” Eden Prairie coach Lee Smith said. “That is just the nature of the way that game had to be played.”

Much attention was paid to the likes of Grand Rapids’ Orange Crush line of Division I-committed players Miller, Hain and Blake McLaughlin, and Eden Prairie’s future first-round NHL draft pick Mittelstadt. That left plenty of room for the supporting cast to leave its imprint.

Thunderhawks senior forward Connor Stefan’s winning goal was just his fourth of the season. Graeber, a Grand Rapids senior forward who hadn’t scored since January, scored a goal and set up another.

Ryan Lesko, a junior forward, scored just his sixth goal of the season for Eden Prairie.