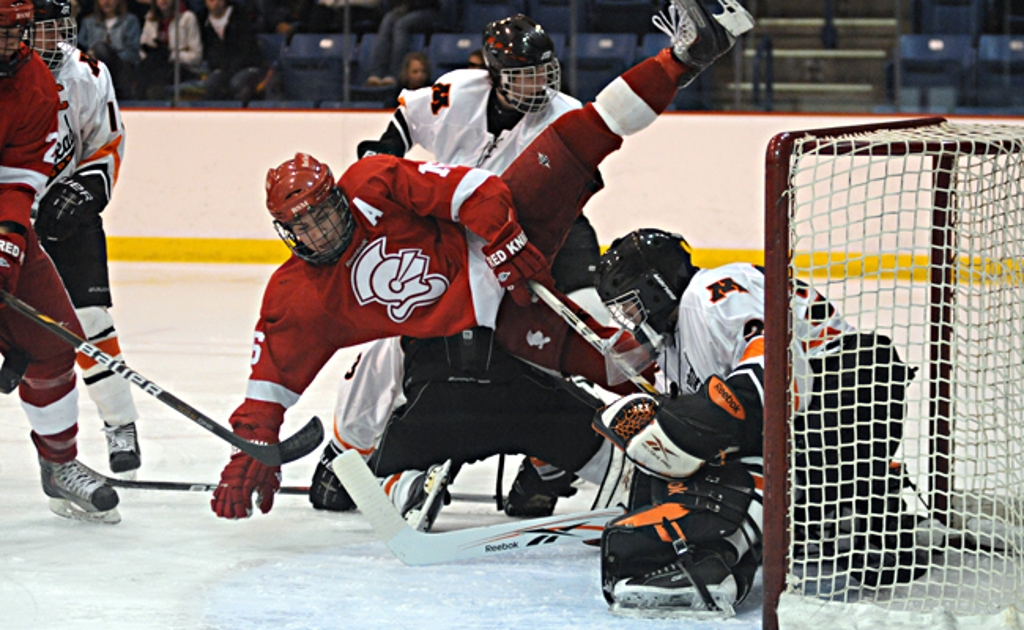 Benilde-St. Margaret's Jake Horton (No. 16) crashes the net during a Red Knights' power play. With two goals Thursday night, the junior defenseman has 14 on the season. Photo by Tim Kolehmainen 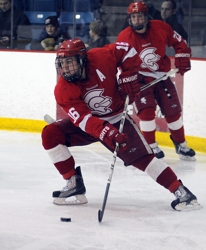 Jake Horton (No. 16) angles toward the Spuds' net. Photo by Tim Kolehmainen

If it was a statement game, the message rang loud and clear.

Benilde-St. Margaret’s, one of the few top teams not to take a turn at No. 1 in the Class AA rankings, took out its frustrations on Moorhead Thursday night at the Moorhead Sports Center.

“It’s about making a statement for the rest of the year,” said junior defenseman Jake Horton, who had two goals and two assists. “That’s really what our goal was for tonight was to make a statement. That’s why we came out flying so fast.”

“It’s not that we don’t think people respect us,” said Benilde-St. Margaret’s coach Ken Pauly, who smiled as he talked about the Class 2A rankings.

His Red Knights have been hovering in the top five much of the season, but haven’t had a spin at No. 1, while Eden Prairie, Hill-Murray, Edina and others have taken turns knocking each other off.

“Don’t get me wrong. People think we’re very good, but we’re sitting here at 17-2 and people are having these big arguments about who is No. 1, Hill-Murray or Eden Prairie. We feel like we belong in that discussion,” Pauly said. “It’s fun to talk about. But there’s a tournament at the end of the year, so all this ranking talk is just that.”

Nonetheless, it appeared to be a motivating factor for the Red Knights, who stormed out to a big lead after one period and didn’t look back against a Spuds team that was on its own winning streak.

Moorhead had won eight straight games, including the last two in overtime (4-3 over Centennial on Jan. 29 and 6-5 at Brainerd on Jan. 27). Since losing to Eden Prairie over the holidays, the Spuds were 10-1-0, with the only loss coming at Minnetonka on Jan. 8, 3-1.

But the Spuds had no answer for Benilde’s high-powered offense.

Jake O’Borsky, Christian Horn, T.J. Moore and Grant Besse added goals for the Red Knights, who have been an offensive juggernaut the past few weeks, scoring 62 goals in its last seven games (8.8 per game), all victories.

In the last 11 games since losing over the holidays to Eden Prairie, the Red Knights are 10-1-0 and have tallied 88 goals (exactly 8.0 per game). The only loss in that stretch was a high-scoring 5-4 decision to Edina on Jan. 11.

What more does a team need to do to stake its claim to No. 1?

“(Tonight was) a pretty big statement that we should be on the short list of who should be the No. 1 team in the state right now,” Pauly said.

“We were trying to show the state that we’re here to stay,” agreed Horn. “We kind of stay at the same spot (near) the top of the rankings and we’ve been winning. It’s time to show people what we have.

“We want to be the team at the end of the season holding up the trophy.” 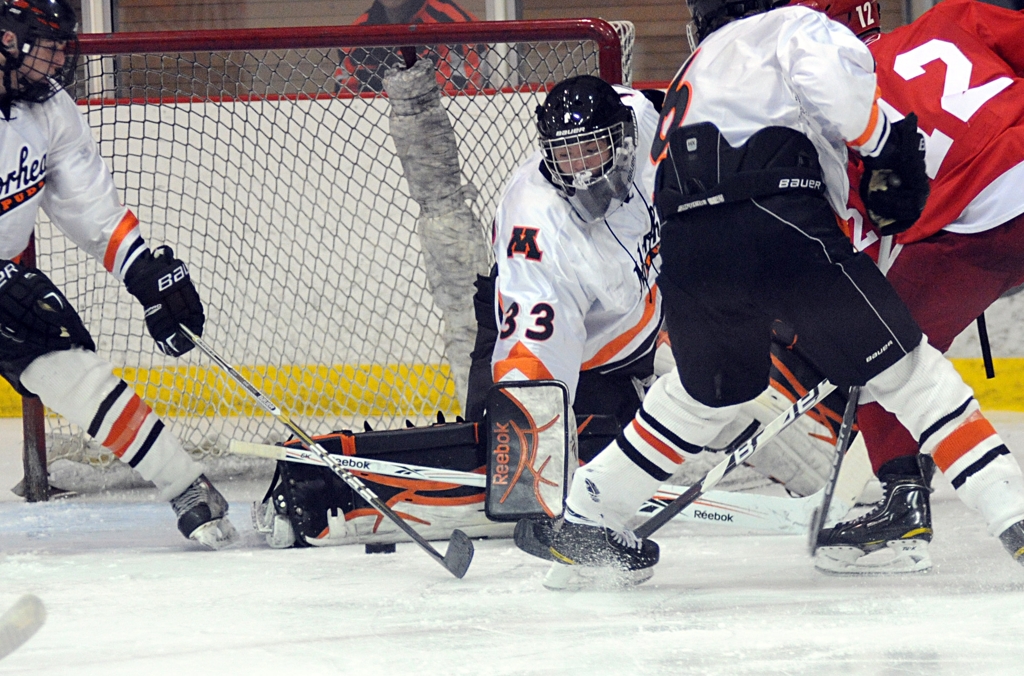 Moorhead's Michael Bitzer (No. 33) stretches to make a save Thursday night. Photo by Tim Kolehmainen 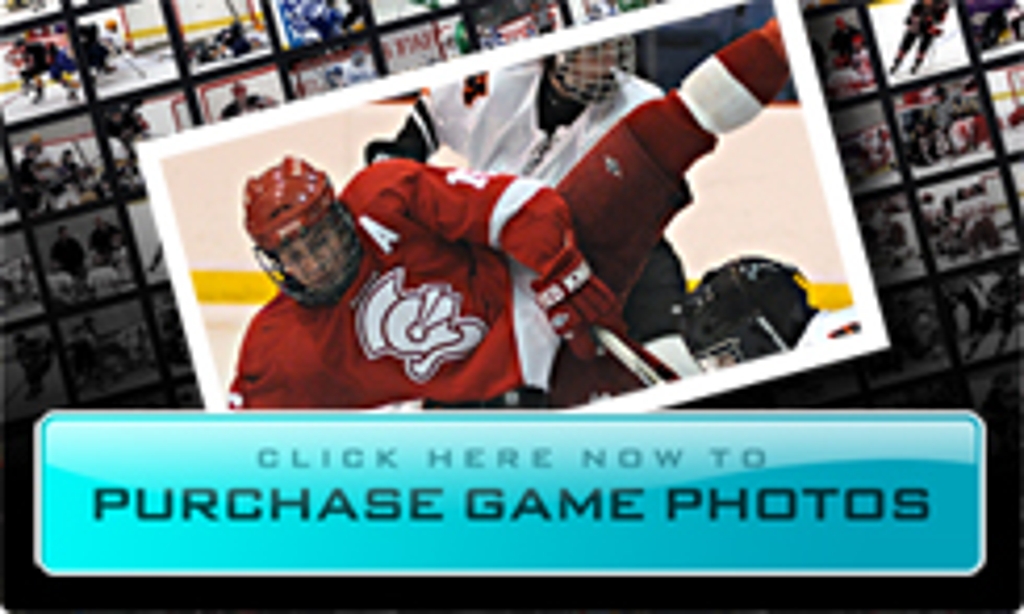 Junior defenseman Jake Horton tallied two goals and two assists to lead No. 4-ranked Class 2A Benilde-St. Margaret's to a 6-1 victory over Moorhead Thursday night at the Moorhead Sports Center.

Jake O'Borsky opened the scoring just 3:10 into the game and the Red Knights were off and running. The high-powered offense added goals from Christian Horn, T.J. Moore and Grant Besse over the final two periods.

Moorhead (14-5-1), which had entered on an eight-game winning streak, picked up a goal from Eric Brenk in the second period. Brenk was also denied on a penalty shot late in the first period with Moorhead trailing 2-0.

Justin Quale made 23 saves on 24 shots for Benilde, while Michael Bitzer had 27 saves for the Spuds.

1. Jake Horton, Benilde-St. Margaret's
The junior defenseman continued his scoring outburst this winter with two goals and two assists. The two tallies brought him up to 14 goals this season, a number Horton didn't believe he'd seen in his hockey career. His work on the point on the power play has buoyed the Red Knights' offense since the holidays.

2. Christian Horn, Benilde-St. Margaret's
Horn scored one of the prettier goals seen in the second period, taking a pass from Horton and breaking in alone on Moorhead goalie Michael Bitzer. He deked Bitzer, then flipped the puck over his outstretched glove for his ninth goal of the season. It also made him the sixth Red Knight to hit the 30-point plateau.

3. Justin Quale, Benilde-St. Margaret's
Quale got the start in goal and made coach Ken Pauly look like a genius. He made 23 saves on 24 shots, and although he was staked to a big early lead, he never faltered. Moorhead's only goal came on the power play from Eric Brenk. Quale also stopped Brenk on a penalty shot in the first period that could have cut into Benilde's lead.