Senior scores three goals against Tartan to keep South St. Paul in the Class 1A mix 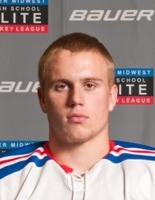 All he did was use his golden touch to torch Tartan for three goals in a 4-0 win on Thursday, Feb. 3, at Wakota Arena.

“It’s great. I love it,” Barlow said. “It has been my goal all year to get a hat trick and to have the fans support me, it was just awesome.”

One of the most recognized Packers players in school history is Phil Housley, who was an offensively gifted defenseman. Barlow has turned himself into the right-handed shooting version of the Packers great.

Barlow put on a show with his stickhandling that got the Packers out of some potential trouble in their own zone. Barlow followed by making the most of his scoring chances, tormenting Tartan with his scoring touch.

When he isn’t making a crisp tape-to-tape pass, Barlow will just use his strong skating stride to get out of trouble himself and rush the puck up the ice, similar to what he did on his first goal.

Barlow gave South St. Paul a 2-0 lead when he took the puck from the Packers blue line and went the distance to shelf a shot over Titans goalie Justin Holmberg.

The 5-foot-11, 192-pound senior captain cruised through the neutral zone and appeared to effortlessly glide through the slot to conclude his highlight-reel goal.

“He so strong on the puck,” Packers coach Jeff Lagoo said. “Stick handles really well, sometime maybe too much, but he is strong enough on his skates to recover if he does make a mistake. He’s a big-time player and does a lot for us.”

Tartan came out swinging in the second and had three power-play opportunities to get back in the game.

Barlow had some time to rest because he was called for roughing, his second time in the penalty box.

When he was finished serving his time, he elected to make up for it and score a backbreaking goal with 3 minutes, 32 seconds left in the period.

“Confidence booster,” Barlow said. “We came out kind of flat footed and they took it to us. That goal just lifted everybody’s spirits.”

“That was a big one,” Lagoo said. “We know that we have to score goals and get up on teams early. Lately, we have been struggling to do that.”

There wasn’t much left for the Titans after Barlow’s second.

South St. Paul took a 3-0 lead into the locker room heading into the third period and had all the momentum.

When the final period began, the Packers were aggressive and eventually tired out Tartan to the point where the Titans were icing the puck on a regular basis.

That eventually caught up to them because Barlow put the referees and arena employees to work as the Packers student section tossed their hats on the ice when he got a shot pas Holmberg less than 5 minutes into the third.

“He’s been leading us all year,” Lagoo said. “Had another great game and helped our team get a big win, especially after a tough loss on Saturday.”

Even though he plays defense, Barlow has found his name in the stats sheet on a regular basis this season.

Barlow is heating up at the perfect time with section playoffs just around the corner and before that, a date with No. 1-ranked (Class 1A) St. Thomas Academy, a team he already has scored twice against this season.

When a bull sees red it attacks.

For South St. Paul's Adam Barlow, blue means to go on the offensive.

In the two meetings against blue-clad Tartan this season, Barlow has five goals and six points.

“I don’t know, just some good luck on my side,” he said. “It’s fun to play them. They are competitive and come to play hard. It just brings out the best in you when a team comes out like they do.”

His spark on Feb. 3 could not have come at a better time.

In the Packers' previous conference game, against North St. Paul on Jan. 30, they lost 5-1 and were swept by the Polars in the season series.

For a team that was ranked as high as No. 5 in the Minnesota Hockey Hub Class 1A rankings, the loss was a major setback.

Barlow and the Packers got the ship back on course against a Titans team they have dominated in two games this year by a combined score of 11-2.

“We’ve been struggling the last few games trying to put the puck in the net,” Barlow said. “It was a positive for us to get back in our normal game. Just a fun night.”

Tartan had a difficult time getting quality chances on Packers’ goalie Luke Palmquist.

Battles along the boards were won by South St. Paul and the toll finally ran its course.

“In the corners in our zone, we just kept playing the body and forced them to give up the puck,” Barlow said. “We made them panic when they had the puck and you could see some frustration.”

Aggravation had to be at a high in the second, when Tartan could not score on three power plays in a relatively short time.

South St. Paul forced the puck to the point and the Titans had a difficult time getting those shots through.

“We have guys that are willing to block shots and our teams just does well on the penalty kill," Lagoo said. "It’s part of who we are as a team.”

“They kept all the shots to the outside,” Palmquist added. “We have four guys that play solid for us all night and they did so tonight and our penalty kill has been phenomenal all year. We took a few dumb penalties in the second, but fought hard and got through it just fine.”

Adam Barlow scored his first hat trick of the season to lead the South St. Paul Packers to a 4-0 victory against the Tartan Titans on Feb. 3 at Wakota Arena.

Steven Ward scored the first goal of the game, when he buried a shot on his second chance. He also had two assists to give him a three point night along with Barlow.

Luke Palmquist had 24 saves for the shutout, which included 11 in the second period. Most of those came on three Tartan power plays, where Palmquist was at his best.

He never looked frazzled in the cage. Palmquist handled the period with a calm to him that did not go well for the Titans.

1. Adam Barlow, South St. Paul
Three goals and solid defensive play makes him the easy choice for the top star. His second goal was a big one that sucked the life out of the Titans. Barlow has 13 goals this season, tied for the team lead. He continues to play well in big games.

2. Steven Ward, South St. Paul
His three-point effort was highlighted by his lone goal. On the power play, Ward buried a second-chance opportunity to give the Packers an early 1-0 lead. He added two assists as he remains one of South St. Paul's go-to guys this season.

3. Luke Palmquist, South St. Paul
Turned away 24 shots, did not give up any good rebounds and was just a calming factor for the Packers. Palmquist's defense made life easy for him, allowing clean looks at the puck, but he still needed to stop the initial shots. Palmquist did so with flying colors. There were questions on how strong the Packers would be in goal this season with the loss of Adam Wilcox. Palmquist's solid play has erased those douts in the minds of many Packers followers.