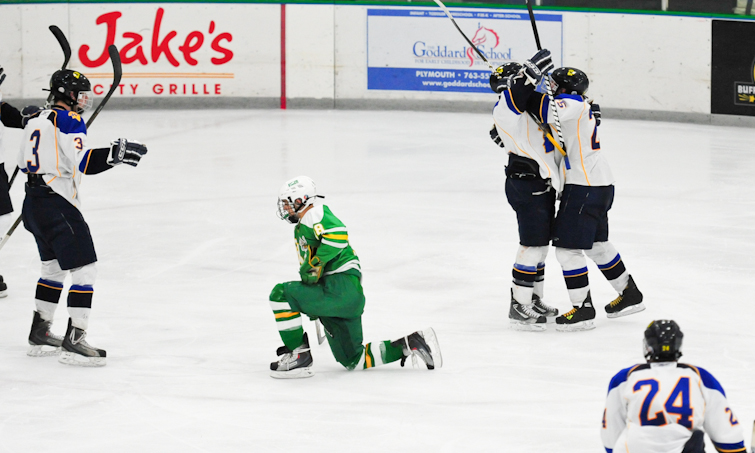 Wayzata celebrates a power play goal by Marc Richards in the third period of the Saturday, Feb. 5, game against Edina. Photo by Adam Crane

If there was a Lake Conference team Edina is glad to be done playing for the regular season, it’s Wayzata.

The Trojans’ 2-1 victory over Edina on Saturday, Jan. 5, was Wayzata’s sixth straight victory over the Hornets.

“Well it's just worked out that way,” Wayzata coach Carl Davis said. “Obviously it's always such a big game between us and we go way back. I think our guys know that we've had a nice run with them. Our seniors have won six in a row now in the last two years and I think that meant a lot to them. I think that might have come into play a little bit.

“It's a solid win for us obviously and it gives us a little more confidence knowing that we can play in big games when we need to.”

Big games have become standard for Lake Conference action with both Edina and Wayzata finding victories as well as losses.

“It was a tough loss but a lot of good things happened in the game,” Edina coach Curt Giles said. “We try to take the positives things that we can, going through this process.

“It's not like we played a 'Sisters of the Poor' team. Wayzata has an excellent hockey team. We competed with them, worked with them. Certain areas we played well. Others, we still need to improve.”

For Giles and the Hornets, the positives came too late as Edina could not recover from the 2-0 hole Wayzata had dug – despite a strong showing in the third period that saw Edina outshoot Wayzata 11-3.

“I really liked the way we came out, right from the start today I thought we were really sharp,” Davis said. “We were moving the puck, we got off to a nice start and it made the difference. We were able to get that first goal, D.J. (Jones) scored a nice goal for us early in the second period. You gotta give Edina some credit though, they really played hard to the end. They outshot us in the third period but Aaron Dingmann, our sophomore, played pretty solid for us today.”

A sixth straight win against Edina was definitely in Dingmann's mind before the game.

"Before the game it was 'Make it Six' and now we'll look to "Make it Seven' the next time we play them," Dingmann said.

For now, both teams face more Lake Conference play ahead and Edina is still feeling confident.

"Team mentality is good," Giles said. "Everybody is positive and everybody is moving forward. We're working hard. We just need to continue to improve our game and keep getting better every practice and every chance we get."

The Trojans know they cannot take a night off from here on out.

“The four teams at the top are so strong and you have to be ready to play every time or you're going to get beat,” Davis said. “That happened to us against Minnetonka (Jan. 29). Here Edina beats Eden Prairie on Thursday (Feb. 3) and we're fortunate to win tonight. Our guys were really ready to play today because they knew that Edina is playing well right now.

“We're all playing pretty good hockey right now and it's fun. That's what it's all about. High school hockey is great and our conference is really, really strong like we knew it was going to be. So the guys have to know they're in for a battle every night here the rest of the way.” 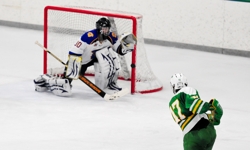 Wayzata sophomore goaltender makes one of his 21 saves against Edina's Michael Sit (No. 17) during the Saturday, Feb. 5, game. Photo by Adam Crane

Wayzata’s 2-1 victory over Edina on Saturday, Feb. 5, was a hard-fought, physical game that made it extremely difficult for any skater to get momentum and shine as a star.

Two players, however, did provide excellent play: the goaltenders.

The shot totals weren’t high for either team which was not a testament to the teams not being able to get the pucks on the net but rather the tough defense that was played.

The shots that were put on net were not easy for the goaltenders to stop.

Wayzata sophomore goaltender Aaron Dingmann was making his fourth varsity start and first against a Top Ten Class 2A team.

Dingmann made 17 saves for a victory against Hopkins on Thursday, Feb. 3, the decision to have him start against Edina came quickly.

“I was told right after that game (against Hopkins),” Dingmann said. “It gave me the chills a little but it’s a great feeling to play a good Edina team.”

The sophomore has found himself playing a more prominent role with the varsity after starting the season on junior varsity.

“We've had him practicing a lot with us in the varsity practices and bringing him along slowly,” Wayzata coach Carl Davis said. “We got him a start last time against Hopkins on Thursday (Feb. 3) and he played really well. Just the progress he's made, he's given himself an opportunity that we thought was the right time.

“We're still looking for that consistent goaltending and right now he's stepped up and he's still doing a nice job for us.”

Dingmann made 21 saves for the Trojans and only allowed a power-play goal which was the result of a deflection through traffic.

“The coaches have been preaching defense all week so I knew they were going to play great,” Dingmann said. “They kept the guys at the perimeter. I just knew I had to make the first save and then just recover.

“I was a little nervous at the beginning but after you make the first save and hold the rebound it's a big confidence booster. I was just feeling great today.”

Dingmann faced tough shots from Edina’s Max Everson – who fired several slap shots towards the Trojans’ netminder – as well as a tough, late chance by Michael Sit that almost snuck through to tie the game.

“I've faced (Everson’s shot) before in Selects one time but it's just a missile coming at you,” Dingmann said. “(Sit’s shot) was kind of like a changeup coming at you. A big changeup. It hit my glove, I didn't hold on to it and there was that big scrum in there trying to find the puck.”

His counterpart on the ice was Edina’s Connor Girard who had recorded a 36 save shutout against Eden Prairie on Thursday, Feb. 3.

“(Girard) played great,” Edina coach Curt Giles said. “He's played well for us going down the stretch here and he's our goaltender. He's really played well, he's played solid and that's all you can ask from a goaltender.”

As for Wayzata, the Trojans still find themselves looking for their full-time goaltender.

“We have to evaluate that,” Davis said. “I was happy with the way (Dingmann) played today and we have a big one coming up on Thursday against Eden Prairie. Obviously (Andrew MacIntyre) is still in the mix but we just gotta sit down and talk about where we want to go from here. Certainly Aaron (Dingmann) is going to have another opportunity.” 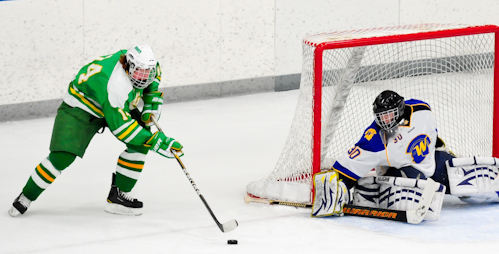 Aaron Dingmann made 21 saves leading Wayzata to a 2-1 victory over Edina.

D.J. Jones kicked off the Trojans' scoring 40 seconds into the second period when his centering pass deflected off an Edina defenseman. The goal put an end to Edina goaltender Connor Girard's shut out streak of 130 minutes, 34 seconds.

Wayzata's Marc Richards added a power play goal in the third period which would prove to be the game-winning goal.

Edina made a strong push for a comeback, outshooting Wayzata 11-3 in the third period and the Hornets scored a power-play goal with just under seven minutes remaining in regulation when a Ben Ostlie wrist shot was deflected by Michael Sit past Dingmann.

Both teams continue Lake Conference play on Thursday, Feb. 10. The Hornets travel to Minnetonka to face the red-hot Skippers and Wayzata will takes on Eden Prairie at the Eden Prairie Community Center - both games are at 7 p.m. 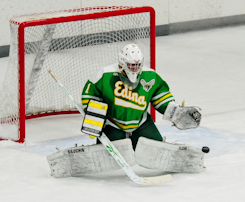 1. Aaron Dingmann, Wayzata
The sophomore goaltender made his fourth start of the season and was the difference in the close game. Besides a power play goal that went in off a deflection, Dingmann was excellent in goal making 21 saves.

2. Connor Girard, Edina
After 130 minutes, 34 seconds of shutout hockey, Girard's shut out streak ended as a centering pass by D.J. Jones was deflected into the net by a Hornet defenseman. The senior goaltender made 18 saves for Edina.

3. Max Everson, Edina
The senior defenseman rarely left the ice in the third period and played his position to perfection. Everson played shutdown defense against one of the state's top scoring line and registered an assist on Edina's lone goal. 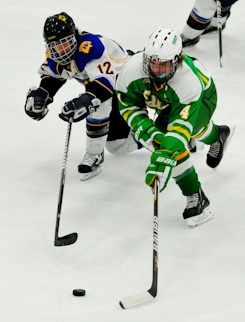