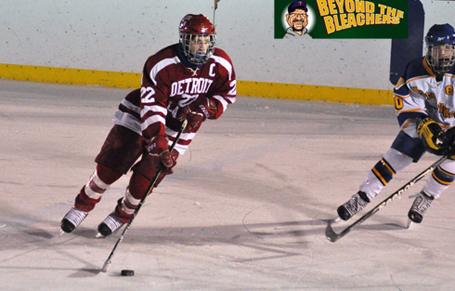 That's how long Wadena-Deer Creek had gone without playing a home game.

After a June 17, tornado destroyed the Wadena Community Center, home hockey games during the 2010-2011 season - and even the season itself - seemed unlikely for the Wolverines.

The community, however, was determined to have hockey in whatever form possible. Although plans to have a new arena were in place at one-point, Wadena-Deer Creek still found itself without a home facility to play their games as the season began.

However, all two hockey teams need to play a game are skaters, two nets, one puck and a sheet of ice.

That's exactly what it took - including officials, boards and fans - as Wadena-Deer Creek hosted Detroit Lakes for the Wolverines' first home game this season on Thursday, Feb. 3.

Wadena-Deer Creek's 'home' game was played outdoors on a sheet of ice constructed over the former rink from the destroyed Community Center.

Detroit Lakes would win the matchup behind the Lakers' senior forwad Nate Baker who notched his fifth hat trick of the season.