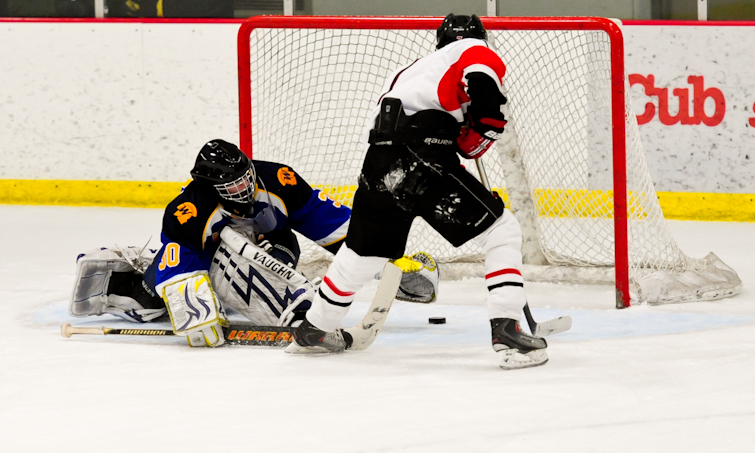 In fact, he was feeling pretty good. 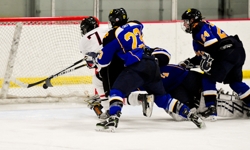 Eden Prairie senior forward Kyle Rau (No. 7) scores his third goal of the game against Wayzata during the Thursday, Feb. 10, game. Photo by Adam Crane

Rau seemed plenty rested as the senior forward registered a hat trick and also contributed an assist in the Eagles 4-3 victory over Wayzata on Thursday, Feb. 10, at the Eden Prairie Community Center.

“Kyle is a huge leader for us and you saw that tonight,” Eden Prairie assistant coach Greg Aslakson said. “He played a great game tonight. He’s just an all-around great player and we saw his leadership tonight.”

Rau provided fireworks at both ends of the first period.

On the front end, the senior forward tapped in a loose puck 18 seconds into the game.

“I just went to the net. It hit one of their guys then hit one of our guys and then there it was,” Rau said. “I had an empty net.”

On the tail end was a penalty shot that Rau drew much to the surprise of not only the crowd at Eden Prairie Community Center, but also Rau himself.

“I was surprised and I was gassed,” Rau said. “I was tired.”

The Mr. Hockey finalist lined up his opponent – Wayzata sophomore goaltender Aaron Dingmann – and moved in for the shot. Rau deked forehand, switched quickly to his backhand and buried the puck past Dingmann.

“I was just making him make the first move and playing off him,” Rau said.

The goal helped Eden Prairie regain a one-goal lead – a lead the Eagles would not lose for the remainder of the game.

“It was important to get a quick start in the game,” Aslakson said. “(Rau) is such a leader for us to get that first goal and then get that penalty shot. No doubt scoring like that really helped us out and gave us some momentum.”

Despite power play, breakaway and odd-man rush opportunities, Wayzata was not able to find a way to beat Andrew Ford - a finalist for the Frank Brimsek Award.

“This is Andrew’s third year with us,” Aslakson said. “He’s a very good goalie and he leads us from the nets out. As the year comes to a close, we really need his leadership in the net. We need him to play at the same level he has the last three years. He’s another good leader for us.”

Although the focus may have been aimed towards the award finalists on the ice, the Eagles stressed it was a team victory.

“We’re so proud of our kids because they were ready, played 51 minutes of good hockey and they beat a good hockey team tonight,” Aslakson said. “(Wayzata) has a lot of good hockey players that you can’t give a lot of space to and I’m just really proud of how our entire team played. This was a game we needed. It was a big game for us to win. We talked about it all week, we had three days of preparation, got ready for them and came out on top tonight.”

Looking Ahead to the Trek to the X

For Eden Prairie, the victory over Wayzata put the Eagles in serious contention for the No. 1 seed in the upcoming Section 6AA tournament.

“We just knew we had to beat them,” Eden Prairie forward Kyle Rau said. “It’s obviously a big section game and conference game. We got it done so it does a lot. It should give us a higher seed than them.”

“This was a game we needed,” Eden Prairie assistant coach Greg Aslakson said. “It was a big game for us to win. We talked about it all week, we had three days of preparation, we got ready for them and came out on top tonight.”

Although the Eagles have three games remaining in the regular season – all three being Lake Conference games and two of them being away games – Eden Prairie is in a ‘postseason state of mind’.

“Tonight was extremely important,” Aslakson said. “We prepared for this game all week. We looked at it like, ‘Let’s go out and get this win tonight, then we have a big game Saturday against Minnetonka but we’re not going to worry about that until tomorrow.’ There’s a lot of hockey to be played in the next couple of weeks.

"Every game is important but we thought this one we had to get if we wanted the number one seed. Tomorrow we’ll come back to work and get ready for Minnetonka.”

The rest of the Eagles seem to agree.

“We’ve been saying that playoffs start now,” Rau said. “We’re getting into that mentality so it was big.”

Q and A with Wayzata coach Carl Davis

Wayzata coach Carl Davis took some time to speak with the MN Hockey Hub after his team's 4-3 loss to Eden Prairie on Thursday, Feb. 10.

Question: It was a tough game for your team. What were your thoughts on the game?
Answer: We put ourselves in a hole. (Eden Prairie) took advantage of a penalty shot and then Rau scored another goal. They took the lead and we were trying to battle from behind the whole game. It’s hard to play from behind, obviously, but I really liked how we competed today. I thought we finally got a little momentum in the third period. I thought we really stepped up when we had to come from two down and made it a game. We have to capitalize on power plays – we had a couple power plays that we really didn’t make much out of and I think that was the difference.

Q: What was the reason for the different line combinations on defense?
A: One of our top defenseman – Marc Richards – broke his skate right before the game. So we were out there playing with four defensemen the first period and it really wasn’t until about halfway through the second that we got him back playing. That threw us off a little bit on our power plays and just our whole sequence of our rotation of our defensemen. Some of our guys were playing a lot more minutes than they normally would have and so we had to battle through that. At that point we were down 4-2.

Q: Was it tough to get any momentum going tonight?
A: We always felt like we were right there. I thought we competed well but we have to bury chances. We had plenty of good opportunities – we hit a couple pipes and we had a couple power plays – and we just have to bear down when we get those chances.

Q: What were the positives you're going to take away from tonight?
A: Just that stick-to-itiveness. Not giving up. We gave ourselves a chance to stay in the game right until the end. That’s a real positive, just the mentality that they stayed after it as hard as they could. They weren’t about to quit at all. I just love that when you don’t give up and you have that determination right until the end.

Q: That was the last meeting against Eden Prairie during the regular season but there's always the postseason. Are you guys hoping to play the Eagles again?
A: Chances are pretty good that we’ll see them again and maybe this will play to our advantage at some point, you never know. It’s funny how the games go. We tied the first time, now they have the edge. But maybe we’ll have that revenge coming back, who knows? We just hope we have the chance to see them again.

Wayzata will be traveling to Moorhead on Friday, Feb. 11 for Hockey Day Minnesota festivities. The Trojans will play Roseau in the first of two outdoor high school hockey games on Saturday, Feb. 12.

Kyle Rau had a hat trick and added an assist as Eden Prairie defeated Wayzata 4-3 on Thursday, Feb. 10, at the Eden Prairie Community Center.

Rau netted his first goal 18 seconds into the game and added a penalty shot goal in the final minute of the first period. He would cap off the hat trick in the second period with the eventual game-winning goal.

Andrew Ford made 21 saves for the Eagles and the senior forward - and Frank Brimsek Award finalist - was called upon several times as the Trojans had multiple power play, breakaway and odd-man rush opportunities.

Wayzata sophomore goaltender Aaron Dingmann made 29 saves in his first career varsity loss - Dingmann now has a 4-1-0 record in varsity play this season.

Up next for Wayzata is a trek up to Moorhead for Hockey Day Minnesota. The Trojans will battle Roseau in the first outdoor game of the day on Saturday, Feb. 12, at 10 a.m.

Eden Prairie will close out its 2011 regular season with three Lake Conference games starting Saturday, Feb. 12, when the Eagles travel to face Minnetonka. The Eagles will play their final home game against Hopkins on Thursday, Feb. 17, and end the season at Braemar Ice Arena against Edina on Saturday, Feb. 19. 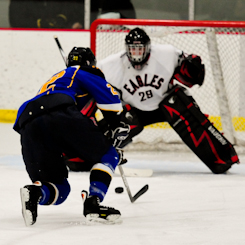 1. Kyle Rau, Eden Prairie
If the senior forward felt pressure being one of the ten Mr. Hockey finalists, he certainly didn't show it. Rau kicked off the game with a quick goal 18 seconds into the contest and added a penalty-shot goal in the final minute of play in the first. Rau would cap off the hat trick halfway through the second period in what would be the eventual game winner. He also assisted on Mark Rath's power-play goal.

2. Andrew Ford, Eden Prairie
One of the two Frank Brimsek Award finalists made 21 saves with several of them coming being big moment saves with the Trojans on the power play or on breakaway chances. Ford showed poise and made saves deserving of being a finalist. 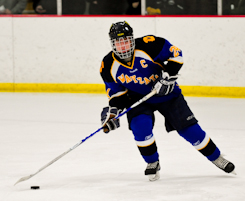