Hill-Murray keeps its attention on Packers 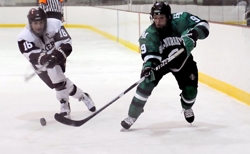 Focus on the task at hand is the approach Hill-Murray has taken into every game this season. It continued that way on Thursday, Feb. 10, at Wakota Arena in South St. Paul.

With Hockey Day Minnesota just two days away, there was no looking ahead to a trip up North to take on Moorhead in the finale of two boy’s high school hockey games on Feb. 12. It was just another day at the office for the state’s No. 1-ranked team, which played like it in a 6-2 Classic Suburban Conference (CSC) game to remain undefeated in league play.

“We just take things one day at a time,” Pioneers forward Ben Bahe said. “If there is a game Thursday and it’s Monday, we worry about Monday practice. When the game is here, we take care of the game. Tonight, we did that because you never take a team for granted.”

This was not a time to take a team lightly. South St. Paul made the previous meeting on Jan. 8 at Aldrich Arena interesting after Hill-Murray had a 4-0 lead. The Pioneers prevailed with a 4-2 victory, so Lechner was aware of what the Packers could bring to the rink if Hill-Murray was not on top of its game.

“It’s South St. Paul, a conference opponent and a proud program,” Hill-Murray coach Bill Lechner said. “We said that we have to take care of today. That is kind of like life. If you forget about the day you are living it kind f screws things up.”

Hill-Murray unloaded 52 shots compared to just 12 for South St. Paul. What was more impressive is the Pioneers kept getting more chances as the game progressed and did not allow for a possible Packers comeback.

Even though they had 40 more shots, the Pioneers needed to get the puck to the net, because Packers’ goalie Luke Palmquist kept his team in the game for the better part of two periods.

“We knew we had to get pucks on the net because their goalie played well the first time we played them,” Bahe said. “You have to crash the net and hopefully get a few rebounds in.”

“We made sure to keep the pedal down for the whole game,” Lechner added. “Mr. Palmquist, their goalie, had a nice game for them. Great athlete and made a lot of nice saves.”

If there was one Pioneer that was going to put his foot on the accelerator, it was Luke Voltin, who had two goals, one a momentum crusher for South St. Paul.

Steven Ward scored 3 minutes, 35 seconds into the third period, which put the score at 4-2 and gave the Packers some life. It only took Voltin to respond 19 seconds later, his second of the evening and more importantly, stretching a lead to three.

South St. Paul was finding its grove early in the third. A shot off the crossbar and Ward's goal following game a similar feel to what happened a month ago.

Voltin silenced a comeback, putting away a one-timer in front of the net and the plan was back in place.

“We knew motivation was on their side,” Voltin said. “Next shift, we just went out there and put the puck in the net. That was it.”

“It did take a little out of them,” Lagoo said. “It was back to three goals and that is a lot against that team. We worked hard to cut it to two, that it was tough when they took it right back. It was back to an uphill battle.”

Once again, in typically Hill-Murray fashion, it took care of business that needed to be done on that particular night.

It rolled four lines and three sets of defensemen to prove it has one of the deepest teams in the state.
“The fun part is we are doing it with 12 forwards and six defensemen,” Lechner said. “We are rolling the lines and everybody is playing. Keeps everybody happy and fresh.”

“Their team speed is tough to match and they have four lines that can do it,” Lagoo said. It’s tough to know the depth they have from the first to fourth line. That is just a nice hockey club. They are ranked No. 1 and deserving of it.”

With Hockey Day Minnesota less than 48 hours from the start of its game against the Packers, Hill-Murray made sure it did not come out flat prior in a conference game prior to a highly anticipated event with the Spuds.

“Obviously we are excited about Saturday, but we had a big conference game today,” Voltin said. “We don’t want to have a team beat us because we are not prepared for them, then go up to Moorhead. That wouldn't go over well for us, so we wanted to come in here and do what we needed to do to win.”

Bahe, a Mr. Hockey finalist, did not even have to put a puck in the net to help the Pioneers. Similar to what has occurred most of the season, Hill-Murray had balanced scoring from all of its lines and had 10 players record at least one point.

“There is a lot of talent on that team and they do a good job of spreading it out,” Lagoo said. “There isn’t a lot of teams that have that kind of depth that can score. It’s hard to match with them, that is for sure.”

This week, the Minnesota Mr. Hockey finalists were announced and one was Ben Bahe of Hill-Murray.

Being on the No. 1-ranked team may have its perks to garnering recognition, but Bahe has certainly earned his part with 45 points this season (23 goals, 22 assists).

Currently, Bahe has not decided on post-high school plans. He said he has spoken with a few colleges, but nothing is locked down yet and may not happen until after the season, especially with focus being on the section playoffs and possibly the state tournament.

As quickly as he received a nomination for the most prestigious individual award in high school hockey, Bahe will deflect recognition to his teammates and coaches in becoming a finalist. One, Luke Voltin, may have said it best.

“It’s great for our team, but more for him,” Voltin said. “He’s the best player on our team and that is all that needs to be said.”

Against the Packers, Bahe registered an assist. He did have several shots on goal, but South St. Paul did not allow him to maneuver freely as he may have liked.

The result was one Bahe prefers and that is a tally in the win column, a reason why he said he is in the running for Mr. Hockey.

“Obviously it’s a great accomplishment for me, but I don’t think I get it without my coach and team support,” Bahe said. “We have been winning a lot, too, so it not only looks good for me, but my team as well.”

Down but not out

Not too often will a team play a No. 1-ranked team in back-to-back games.

If a team is in the Classic Suburban Conference, this may not be out of the ordinary.

South St. Paul may have caught Hill-Murray at the worst time as the Pioneers are now rolling with 11 consecutive wins, which started on Jan. 8 against the Packers.

Prior to its 6-2 loss to the Pioneers, South St. Paul hosted No. 1-ranked St. Thomas Academy of Class A on Feb. 5.

To most teams, it may be a daunting challenge, but for Adam Barlow of the Packers, he welcomes it with open arms.

“It’s a great experience and I love playing against those teams,” he said. “They’re so fast and when the game is fast, it’s more fun. You take away the score and focus on what you can learn, it can help you so much, especially this late in the season.”

With Mahtomedi on the schedule for the season finale, also a Section 4A team along with South St. Paul, that matchup could determine how the seeds will align.

Not only is there a tone of confidence in Barlow’s words for the showdown with the Zephyrs, but for the other two games as well.

“There’s no reason why we shouldn’t win the next few games before the playoffs,” Barlow said. “We have beaten these teams before and need to have our heads up heading into sections.”

St. Thomas Academy is in Section 4A as well and have beaten South St. Paul twice, most recently, 5-0 on Feb. 5 at Wakota Arena.

Despite losing to the Cadets in both meetings, Barlow said he looks forward and wants a third crack at one of the state’s elite.

“We want to play St. Thomas again and get a chance to beat them,” he said. “It’s a realistic goal and I think we can do it. It’ll be a lot of fun and I am looking forward to it.”

Luke Voltin scored two goals for Hill-Murray as the Pioneers cruised to a 6-2 win against South St. Paul.

Hill-Murray fired 52 shots on goal, 39 in the final two periods when it controlled most of the game.

There were 10 Pioneers who recorded at least one point and eight had multi-point nights.

Voltin scored the first goal of the game in the opening period, putting away a rebound that came off the stick of Jake Guentzel.

His second was in the third period, 19 seconds after South St. Pauls' Steven Ward made it a two-goal game.

Andy Faust and Zach LaValle also scored in the first period for the Pioneers, while Adam Barlow tallied the only goal for South St. Paul.

Loren French gave Hill-Murray a 4-1 lead in the second, his 10th of the season. There are now seven Pioneers, who have reached double-digit goals this season.

After Voltin's goal, Guentzel buried his 13th on a one-timer on the power play.

Tim Shaughnessy did not have a heavy workload. He made 10 saves on 12 shots, with only one coming in a dominant second period by the Pioneers.

On the other hand. Luke Palmquist had a full workday in net for the Packers, playing the whole game and ending with 46 saves.

Hill-Murray improves its record to 18-3-1 (12-0-0 CSC) and will travel to Moorhead on Feb. 12 to play the Spuds in the high school finale of Hockey Day Minnesota.

1. Luke Voltin, Hill-Murray
Put away two important goals for the top-ranked Pioneers. He scored the first goal of the game for an early lead and later, took back momentum with a crushing goal, just 19 seconds after South St. Paul cut the lead to two. Voltin had some cracks at a hat trick, but his two goals, more so when he scored them, gives him the top star.

2. Loren French, Hill-Murray
Besides recording a goal and an assist, French created more chances and very rarely was his line on the Pioneers side of center ice. He also made a great defensive play in the first period when he blocked a shot, raced down to get it to put a shot on goal. It was the start of a dominant game for the Pioneers.

3. Jake Guentzel, Hill-Murray
On top of getting a goal and an assist as well, he had his shots to put up some more numbers, too. As a sophomore, Guentzel continues to shine in his first varsity season. He is second on the team in points (37) and first in assists (24). His goal late in the third was a one-timer from the right circle and there was no doubt about it going in.