Bruce Plante steps down as Hermantown coach after 28 years

His teams won the Class 1A state tournament in 2016 and this year, and reached the championship game eight straight years. 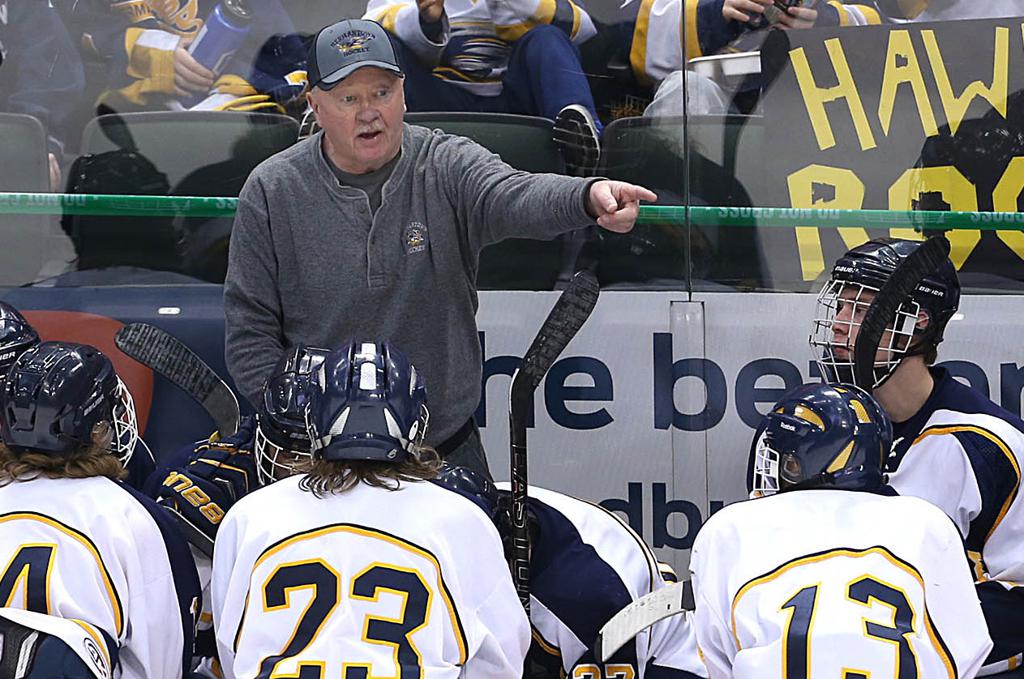 Hermantown’s Bruce Plante, one of the state’s most recognizable -- and controversial -- high school coaches, has retired after 28 seasons that included three state Class 1A championships and 547 victories.

Plante became a fixture at St. Paul’s Xcel Energy Center and on statewide television each March during Hermantown’s unprecedented run of six straight championship-game losses from 2010-2015. As those losses mounted, each one seemingly coming in more excruciating fashion than the last, Plante said the pressure to win became almost unbearable.

“Going into those locker rooms after losing, it was just devastating,” the 68-year-old Plante said Thursday afternoon after submitting his resignation and then telling his players in person at Hermantown High School. “It almost got to the point where I didn’t want to go through that emotion anymore.”

The Hawks ended that streak in 2016 and won a second-straight title (and third overall) last March, capping a 29-1-1 season.

“A lot of weird things happened to us,” said the colorful Plante, renowned for his willingness to speak his mind about private school powers such as St. Thomas Academy playing in Class 1A (before the Cadets opted up to the big-school class) and most anything else about which he was asked. “To win that one (in 2016), it was really important.”

Plante believes that longtime assistant coaches Pat Andrews and Nate Buck have been sufficiently groomed to take over the program, making the timing right for the him to step down.

“Those two guys are there and ready to go,” Plante said. “I’m hoping they get the job. The table is set perfectly for that.”

A Cloquet native who played goalie for the Lumberjacks and for legendary coaches Don Bourdeau and Bill Kennedy, Plante also spent two seasons playing in college for UW-Superior. He got his start as a coach in 1969 leading Cloquet’s Pee Wee B team. In 14 seasons in the Cloquet youth system, Plante worked his way up to the Pee Wee A and then Bantam A level before taking the head coaching position at Hermantown in 1983-84.

“I never really saw myself being a high school coach,” Plante said. “But my first year, and doing well, that was kind of an eye-opener for me. That was probably my favorite year of coaching.”

The Hawks went 15-8-0 in Plante’s first season as coach. They were led by a senior goaltender named Daryl Illikainen, the same Daryl Illikainen who would become Plante’s right-hand man as his top assistant for more than two decades.

“The loyalty Bruce had from his assistants was just remarkable,” Cloquet coach Dave Esse said. “Those guys would go to bat for Bruce for anything. When people talk about old school, that’s old school.”

Plante recounted one of his toughest moments as a coach as coming in the 2013 state championship game against St. Thomas Academy. The Hawks were called for a penalty in the closing minutes after a player from each team dove for a loose puck in the corner. While attempting to kill the penalty, Hermantown’s Jake Zeleznikar was put into what Plante called a “headlock” by a St. Thomas Academy player. No penalty was called.

The Cadets went on to score with 6.1 seconds left to win 5-4 and hand the Hawks their third straight state title game loss.

“That locker room was painful to go into,” Plante said. “Guys didn’t even make it to their seats, they were falling like lumber on the locker room floor. They were crying their eyes out.”

Plante, already well known for his candid remarks at postgame media sessions, drew an overflow crowd -- more than twice the size of the usual gathering -- in the media room after that game. Top Minnesota State High School League officials were among those in attendance. Plante, who marched onto the ice and straight at the referees after the game, sharing his thoughts on the late-game penalty call and no-call, was remarkably restrained in his comments to the media.

“Unless you have gone through it, it is hard to explain,” Plante said about the string of title game losses. “It is just a lousy sport, it shouldn’t mean that much. But it becomes more than a game, it creates a life of its own.

“You start wondering about yourself, wondering what is going on.”

Plante finished with a 547-197-23 record in his two stints as the Hawks coach (he took a six-year break from coaching from 1990-95 to scout for the Minnesota North Stars and Detroit Red Wings), leading them to 14 state tournament appearances. Last season they extended their regular-season unbeaten streak against Class 1A competition to 56 games. Hermantown has played in each of the last eight Class 1A championship games.

“I love the kids, and I love the practices and the games,” said Plante, one of just nine state boys' high school hockey coaches with more than 500 victories. “But all the other stuff, the budget, the scheduling, questions about playing in Class AA or A, all this other stuff you have to deal with all the time wore on me.

“I wanted to leave happy and having fun and enjoying the kids and not being pushed out.”

Plante said he plans to spend more time traveling with his wife, Sandy, watching his grandchildren play hockey and pursuing his outdoors passions of duck and pheasant hunting and fishing.

Hermantown Activities Director Beth Clark said, “As good as he is as a coach, he's even a better person, teacher and friend. He has developed a great rapport over the years with our players, parents and opponents. It will definitely be different next winter when he isn't on the bench for a Hermantown hockey game.’’

Including his 14 years coaching in the Cloquet youth hockey system, Plante, by his count, finishes his 42-year career with 999 victories. He was selected the state's coach of the year in Class 1A in a vote of his fellow coaches five times. No other coach, in either class, has received the honor more than twice.

“What a credit to the longevity of his career,” said Esse, who will join Plante behind the bench coaching a team of Minnesota senior all-stars during the Minnesota National Invitational Tournament April 20-23 in Plymouth. “He is who he is and he says what is on his mind. You have to respect him for that.”