Wayzata finds its mark in overtime 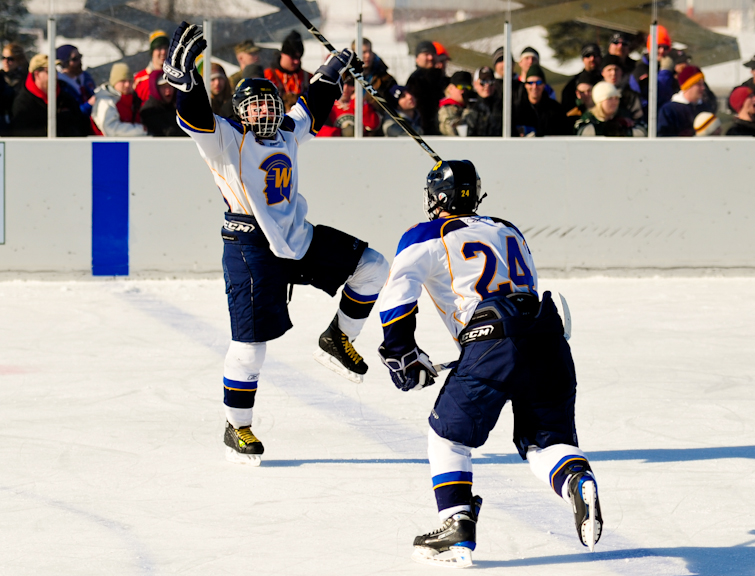 Wayzata's Marc Richards (left) kicks off the celebration for the Trojans with D.J. Jones (No. 24) after scoring a shorthanded goal in overtime against Roseau in the first outdoor game of 2011 Hockey Day Minnesota on Saturday, Feb. 12. Photo by Adam Crane

Wayzata kicked off Hockey Day Minnesota with a thrilling 2-1 overtime victory over Roseau on Saturday, Feb. 12.

Senior defenseman Marc Richards was the hero for the Trojans as he put a quick shot on a loose puck 95 seconds in overtime.

“The puck kind of squirted out,” Richards said. “I just threw it to the net and it found its way in. It wasn’t the hardest shot but in a game like that, that’s how you’re going to win.”

Richards’ goal came immediately following a Roseau timeout. The Rams were on a power play and called a timeout with the faceoff coming deep in their zone.

“Lucky for us they called a timeout there,” Wayzata coach Carl Davis said. “We were able to set up a play and it worked.

“Lo and behold we won the draw, got it back. I told the defense, ‘Make sure you don’t shoot it into them. Be absolutely 100 percent sure you either make that pass D-to-D or you get that shot to the net.’ Sure enough I think the goalie was screened a little bit and it slid in lower corner.”

The game-winner may not have been the prettiest goal, but Wayzata kicked off the Hockey Day Minnesota festivities in Moorhead with a welcomed victory.

“We found a way to win,” Davis said. “I have a lot of respect for Roseau. I thought (Roseau) did a great job of blocking shots and I thought they played hard.” 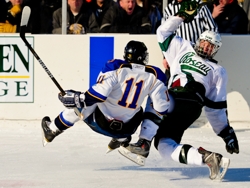 Roseau showcased a stellar defensive performance holding Wayzata’s Tony Cameranesi, Mario Lucia and Tyler Klein – one of the state’s top scoring lines – to one goal. The Rams defense was led by junior goaltender Jared Strand who made 31 saves.

“I thought (Strand) did real fine,” Roseau coach Andy Lundbohm said. “I thought he handled himself very well. I think that was probably one of his better games and probably the best game he’s played all year. He’s been playing real solid lately.”

For Strand, there were more things to worry about rather than the Trojans’ first line.

“I just tried to do whatever I could to stop the puck,” Strand said. “I tried to keep the sun out of my eyes and see the puck all the way in.”

The Rams were no strangers to outdoor play either.

“When we were Mites we had to play outside every practice but then we got the two indoor arenas around Squirts so then we played indoors,” Strand said.

Although the outdoor background didn’t yield the result the Rams were hoping for, there were still a few smiles in the Roseau locker room.

“I was pleased with the way our kids competed – just tough to lose at the end there,” Lundbohm said.

“I thought we handled ourselves really well and competed pretty darn good.”

Perhaps the biggest smile after the game, however, belonged to Richards who admitted he enjoyed taking in the moment to add to his list of cherished hockey memories.

“It’s definitely up there,” Richards said. “I haven’t made it to the State Tournament for high school – but I’m really hoping for it this year and that would definitely top it, obviously.

“But right now it’s definitely up there at the top.” 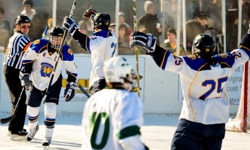 Despite the glamour of Hockey Day Minnesota, the game between Wayzata and Roseau still carried weight as both teams are vying for momentum heading into the playoffs.

“It builds on our whole psyche that we’re moving in the right direction right now,” Wayzata coach Carl Davis said. “We want to keep this good thing alive right here. We got two big games next week with Minnetonka and Hopkins.”

The Trojans defeated the Rams 2-1 in overtime on a shorthanded goal by Marc Richards.

“I think that was huge for our team,” Richards said. “We’ve been in a lot of overtime games this year and we haven’t lost one in overtime. We’ve had some wins and ties. I think it was some big momentum for us to be outside and having fun. We can still pick up momentum for playoffs.”

Roseau will battle tough Section 8AA play featuring Bemidji – who is expected to be given the top seed – and Moorhead.

For Wayzata, they face the “Section of Death” in Section 6AA with Benilde-St. Margaret’s, Eden Prairie and Minnetonka. The Trojans are hoping the Hockey Day Minnesota victory will propel them to playoff success. 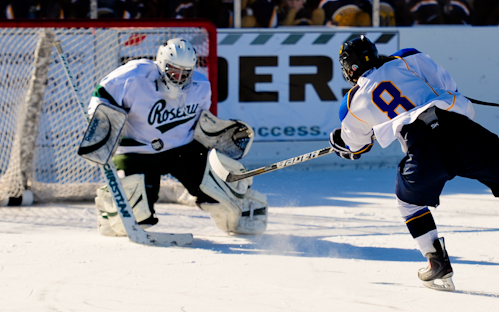 Roseau junior goaltender makes one of his 31 saves on Wayzata's Kage Tiller during the Saturday, Feb. 12, game on Hockey Day Minnesota. Photo by Adam Crane

Marc Richards scored a shorthanded goal 95 seconds into overtime to send Wayzata past Roseau during the opening outdoor game of Hockey Day Minnesota on Saturday, Feb. 12.

Mario Lucia scored the first goal for Wayzata 50 seconds into the second period.

Roseau would answer with 2:36 remaining in the second period with a goal by Shane Omdahl.

Stand made 31 saves for the Rams in the low-scoring game.

Both teams will play their last regular season home game next week. Roseau will host International Falls at Roseau Memorial Arena on Tuesday, Feb. 15, at 7:30 p.m.

Wayzata will dive back into Lake Conference play when they faceoff against Minnetonka at Plymouth Ice Center on Thursday, Feb. 17, at 7 p.m. 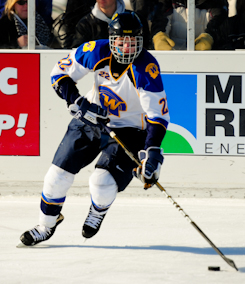 1. Marc Richards, Wayzata
The senior defenseman stepped up to play the hero in overtime by netting the game-winner as the Trojans were shorthanded. Richards played a great game at both ends of the ice after missing half of Wayzata's game against Eden Prairie (Feb. 10) with a broken skate.

2. Mario Lucia, Wayzata
Goals were hard to come by in the outdoor game but Lucia made his goal look easy. Lucia scored the first goal of the game and was a presence during each of his shifts. The junior forward also threw his weight around and responded to physical play by Roseau.

3. Jared Strand, Roseau
Although Roseau did a great job blocking several shots, Strand did his part as the last line of defense. The junior goaltender made 31 saves for the Rams - several of them coming on Wayzata odd man rushes. 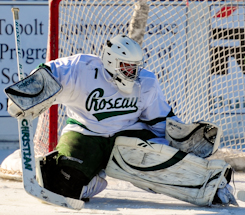