Pioneers find a way to win 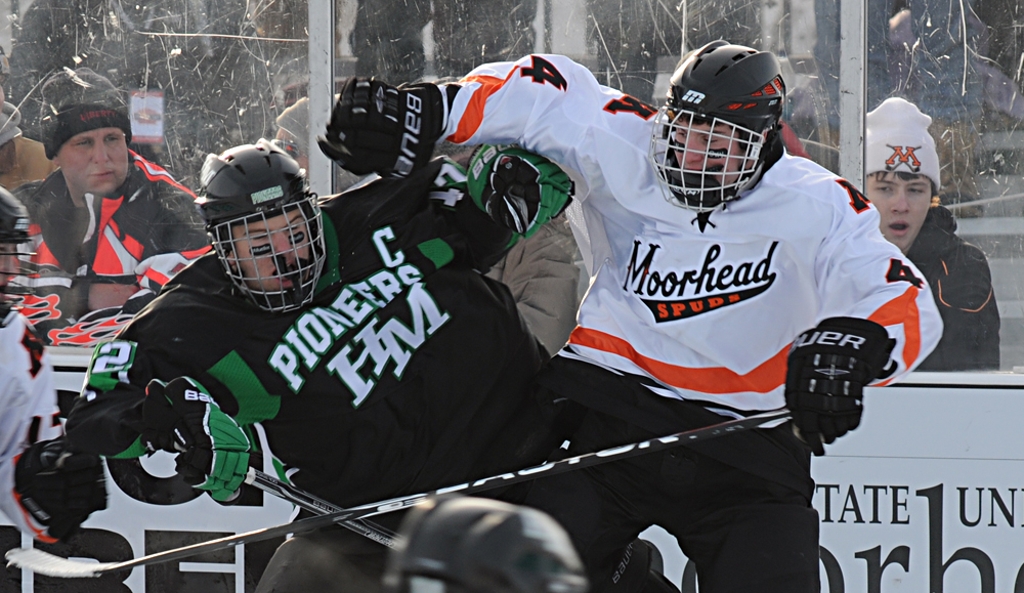 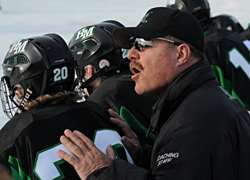 His message was simple. No excuses allowed.

Midway through the third period of his team’s Hockey Day Minnesota game against host Moorhead Saturday afternoon, Hill-Murray coach Bill Lechner turned to his players with just one piece of advice.

Hill-Murray’s captain corralled a bouncing puck and snapped a shot through Moorhead goalie Michael Bitzer with just 5:01 remaining to send the No. 1 AA Pioneers (19-3-1) to a 3-2 victory over the Spuds (14-7-2).

“Good teams find a way to win,” said Hill-Murray goaltender Tim Shaughnessy, who had 17 saves on 19 shots. “We had to find a way to prove that we’re a good team.”

The goal put the finishing touches on a sodden game that was perhaps more remarkable for the ice conditions than for the level of play.

As the game progressed, both blue lines became sunken strips of slush that tripped up onrushing forwards and retreating defensemen. The north goal was shifted six feet closer to the blue line because the crease disappeared beneath Minnesota’s unofficial 10,001st lake, which extended into both corners. Muck and grind took on an entirely literal meaning.

Between the second and third periods, Lechner told his disbelieving team to forget everything he had been teaching them over the past three months. No cycling, no neutral zone traps, no pretty passing plays.

“You get the puck in your own zone, throw it out,” Lechner recalled the highlights of his lecture. “Throw it at the net and crash. Get an ugly goal.”

Moorhead coach Dave Morinville agreed. “You’re not going to be going tick-tack-toe on your breakouts. It’s just get it and ram it and hopefully get some rebounds.”

Bahe’s game winner came on a play exactly as both coaches described. The Spuds were unable to enter the offensive zone, as the puck skipped and hopped its way through the slush along the boards. Bahe found a way to snare it, then pounded it into the net.

It was Hill-Murray’s third one-goal lead of the game, but this time it stood up.

J.D. Cotroneo and Bobby Bruski each scored for the Pioneers, while Eric Brenk and Bryant Christian netted goals for the Spuds. Bitzer finished with 26 saves on 29 shots, as Hill-Murray held a 29-19 shot advantage.

When the game ended, the players milled around on the battered ice, trading war stories. No one seemed interested in continuing the game, but weren’t yet ready to leave the spotlight of Hockey Day Minnesota. 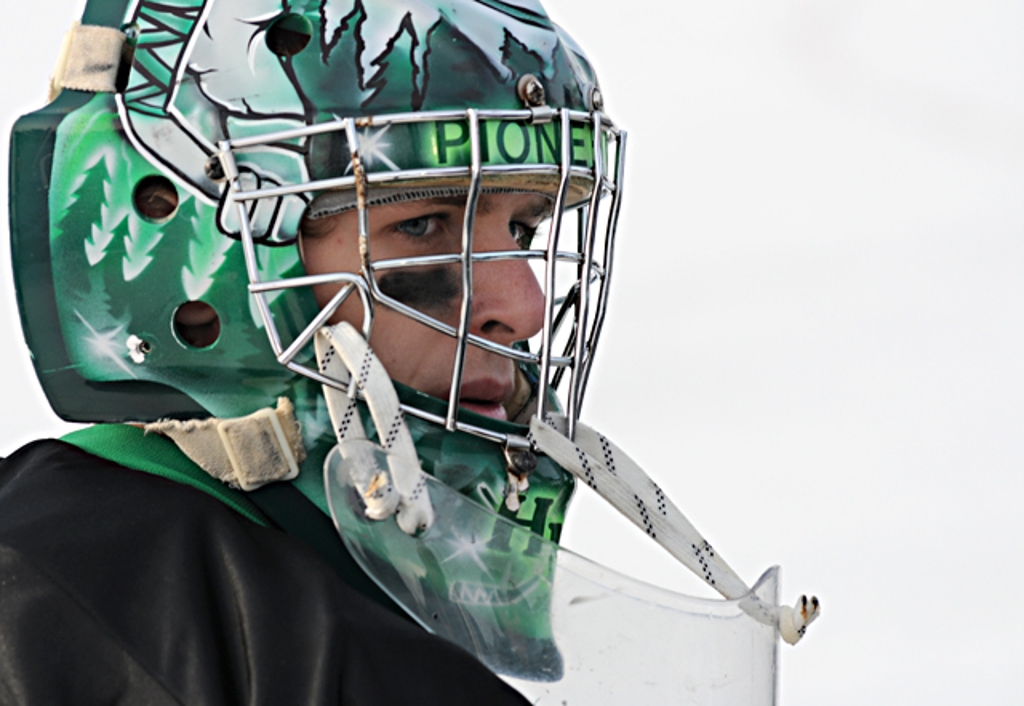 1. Ben Bahe, Hill-Murray
The senior forward -- and Pioneers' leading scorer -- found a way to get it done on a sloppy and pitted outdoor rink, scoring the game-winner with just 5:01 remaining in the third period to beat host Moorhead, 3-2.  Bahe leads the Pioneers in scoring with 46 points and was named a finalist for the Minnesota Mr. Hockey award earlier this week.

T2. Tim Shaugnessy, Hill-Murray
Shaugnessy and his counterpart in the Moorhead net, Michael Bitzer, share the second star for battling both the sun and a torn up crease that became Minnesota's unofficial 10,001st lake midway through the first period.  Shaugnessy, who sported sunglasses under this mask for part of the first period, finished with 17 saves on 19 shots.

T2. Michael Bitzer, Moorhead
Bitzer saw a bit more action in the Spuds' net, making 26 saves on 29 shots.  He went with eye black instead of sunglasses to help alleviate the sun's glare off the ice, but made his own fashion statement with a blaze orange stocking cap over his helmet. 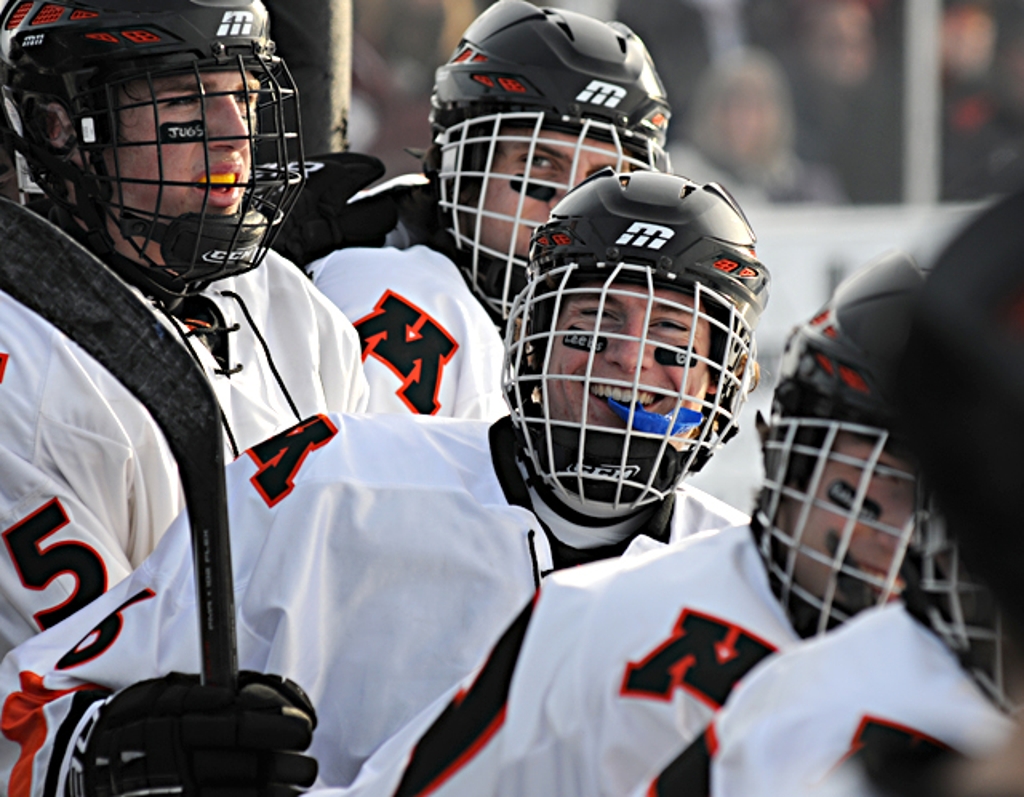 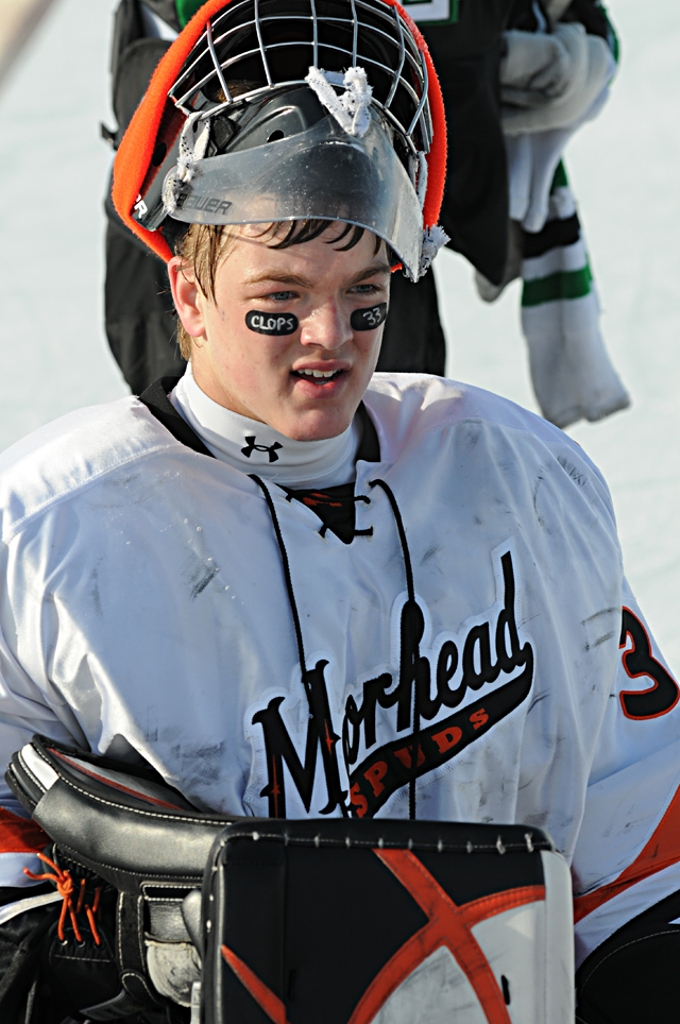 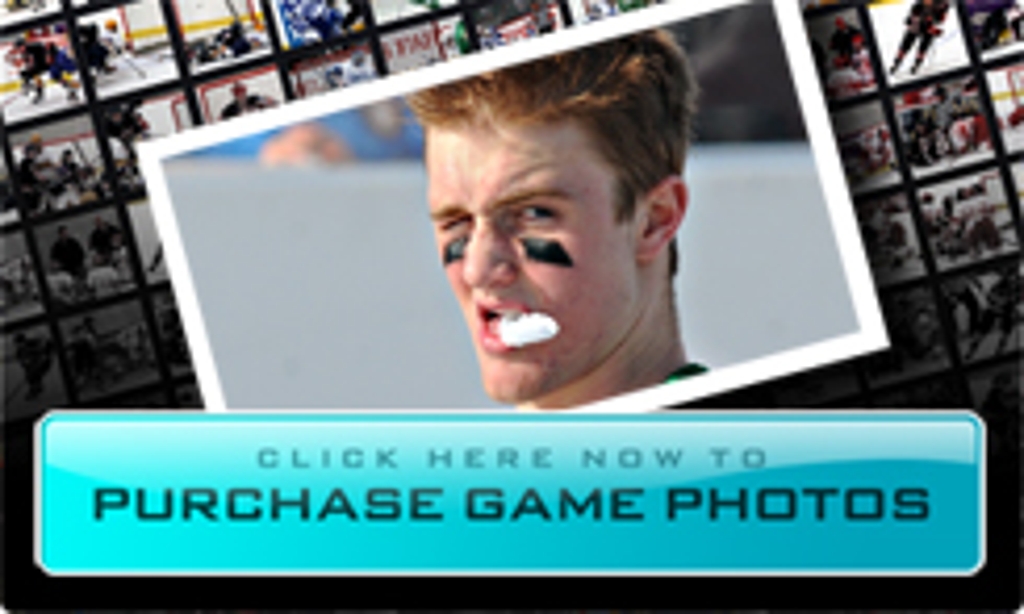