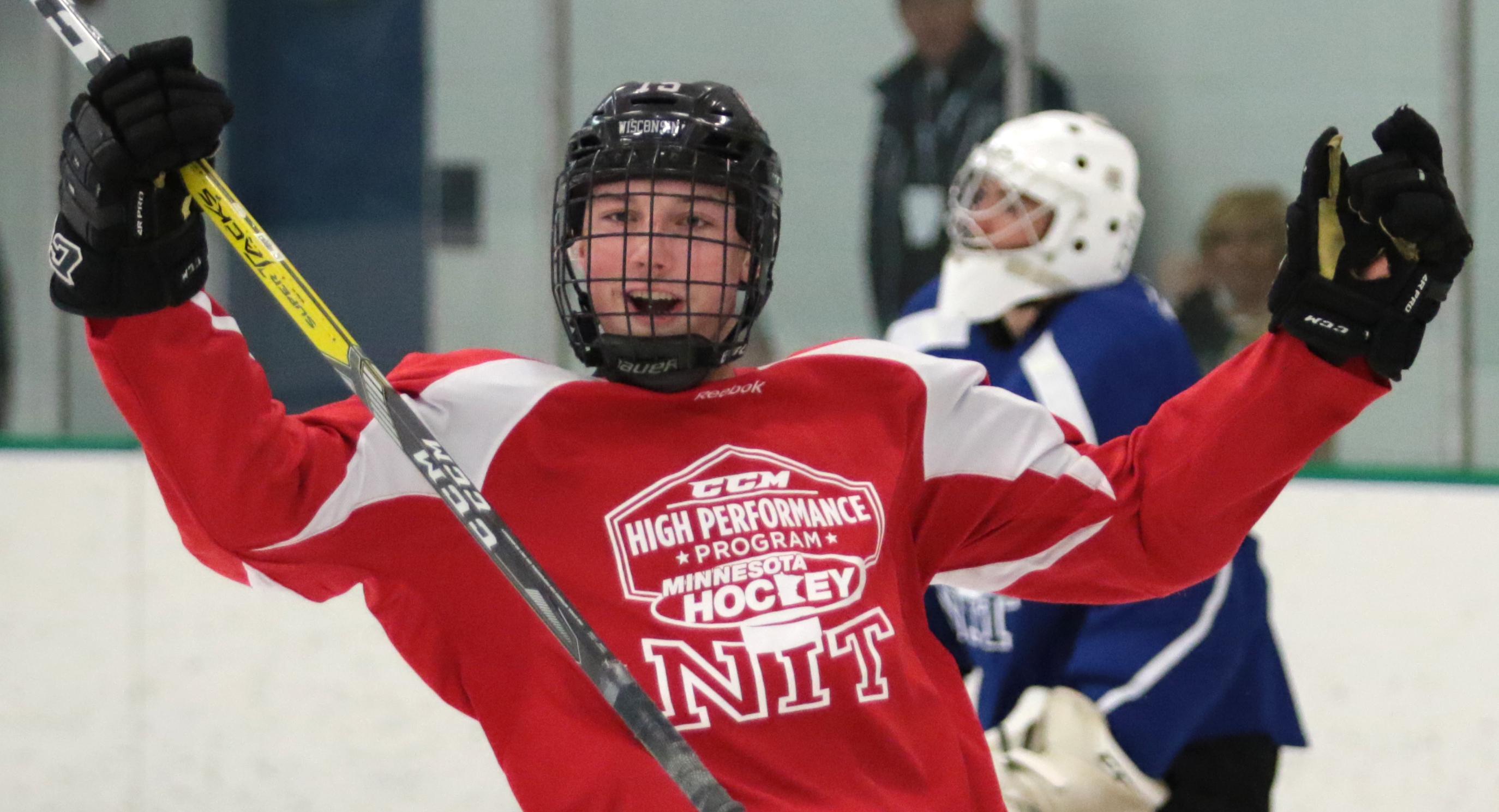 Goaltender Sam Dunn nearly recorded a shutout for Wisconsin, stopping 20 of 21 shots for a .952 save percentage and giving up his only goal of the game with just 52 seconds remaining in the third period.

Head coach Tim Ebner enjoys tournaments like the High Performance NIT and was happy to get the championship for the players, some of whom just lost in overtime in the USA Hockey national tournament championship game a couple weeks ago. “It’s always fun when you can bring talented kids together and try to work for a common goal,” Ebner said. “It’s been a while since we won this thing; I think it was the very first year that Wisconsin won, so to win this year and finish it out for those guys and for them to finish out their high school careers with winning a trophy, a championship, it’s always fun.”

James Furey led the Wisconsin offense, assisting on the eventual game-winner 12:32 into the first period and scoring an insurance goal 59 seconds into the second period. The two points today were Furey’s first of the tournament.

After a 5-on-3 opportunity for each team in the first period, Ebner stressed the need for discipline. This is especially true, Ebner noted, when playing a deep roster like Michigan that includes many players with all-state honors. “You can’t retaliate,” Ebner said. “You’re going to get a stick here or there or where you don’t want it, and you just have to be smart about it. It was just staying out of the box and emphasizing being smart, don’t retaliate, and use our strength, which is our quickness and speed.”

Wisconsin ended a strong first period leading 2-0, and Ebner said that the strategy for the second was not necessarily to score a lot of goals but just to play a good, solid period of hockey. “We had a couple little short setbacks in the first period of where we got a little selfish,” Ebner said. “But getting the third goal was really important for us to just get some confidence and get over that little hump of a two-goal lead. The end of the third period was just a matter of playing disciplined and making smart decisions.”

Though goaltender Sam Dunn knows you can never take any team for granted, he said that he was confident going into today’s game. “I had heard that the Michigan Seniors tied our Wisconsin Junior team, and when we scrimmaged our Wisconsin Junior team, we won,” Dunn said. “But we knew they were going to be a hard-working team so we knew we had to put our sticks away and not retaliate and play good hockey.” 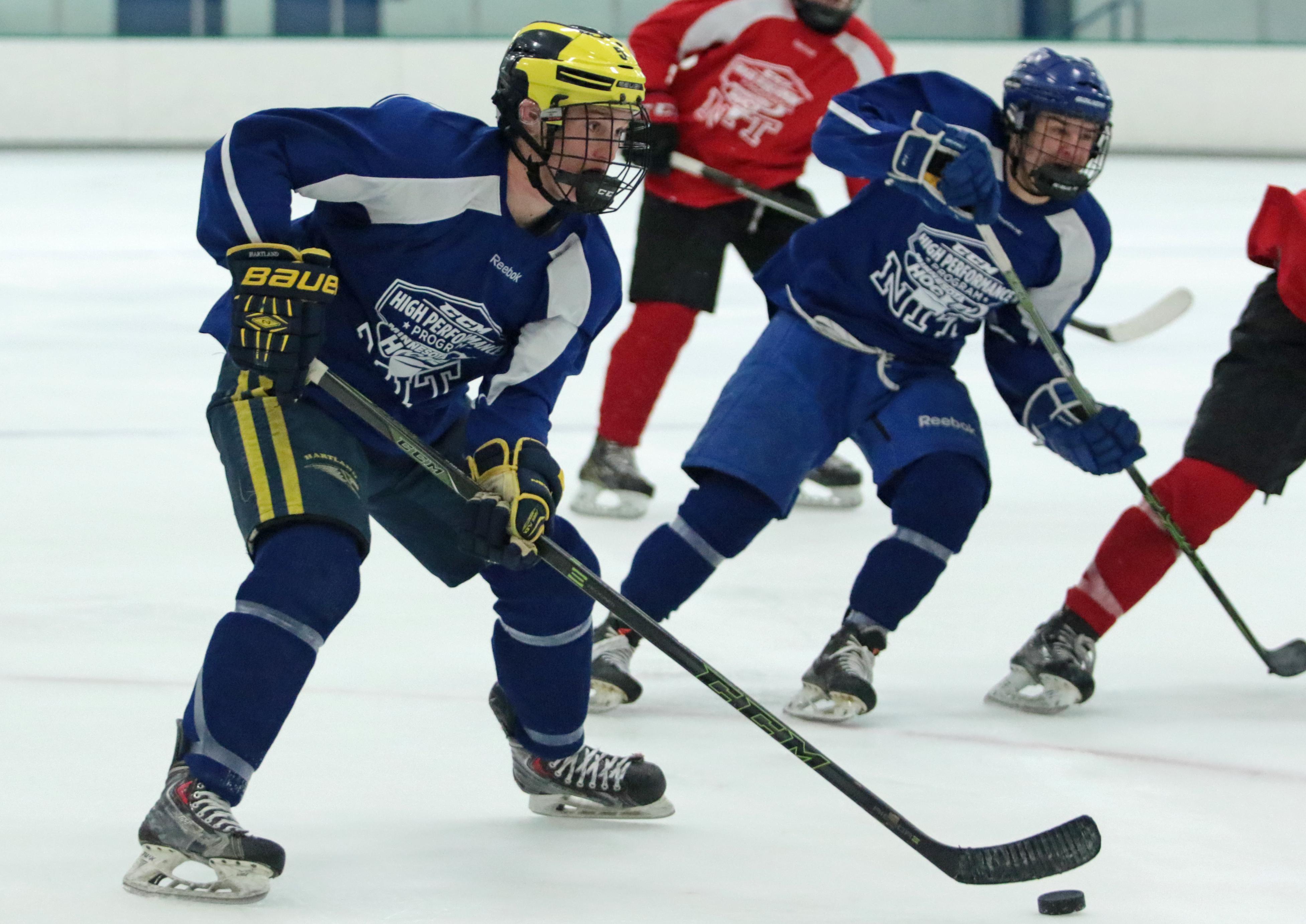 Wisconsin’s James Furey led the Wisconsin offense with a goal and an assist, while goaltender Sam Dunn nearly led Wisconsin to a shutout. Dunn made 20 saves in the win and gave up Michigan’s only goal with only 52 seconds to play in the game.

Jed Pietila was the goal scorer for Michigan, finding the back of the net unassisted.

Wisconsin made it to the High Performance NIT final game after going 1-0-2 in their first three tournament games, first defeating Michigan HP 5-1 before tying Minnesota HP 1-1 and North Dakota 3-3. Wisconsin and Michigan each allowed only five goals in the previous three games. 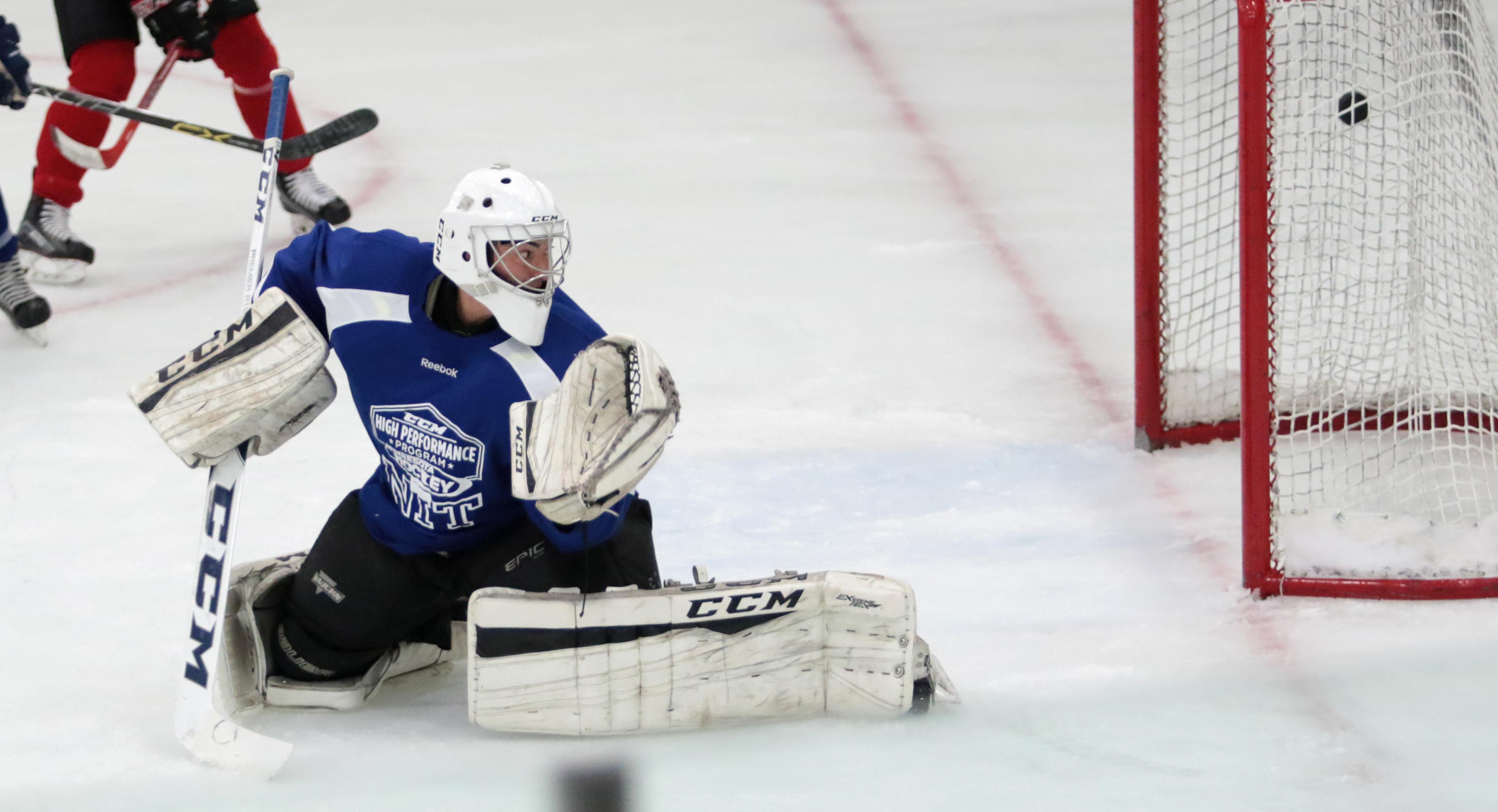 The game winning goal goes over the shoulder of Michigan goaltender Logan Neaton (Brighton) on a shot from the point by Wisconsin's Hunter Schwehr (Xavier). Photo by Cheryl Myers, SportsEngine